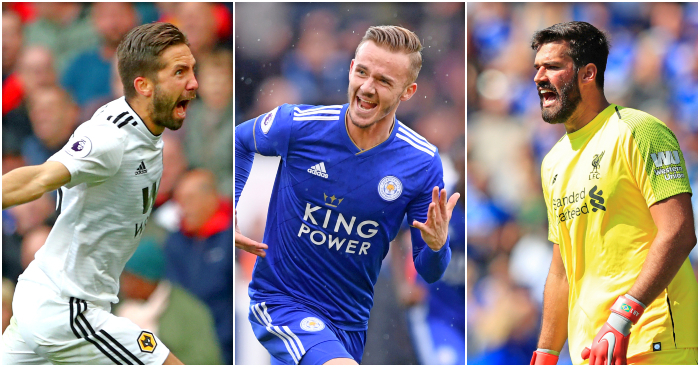 10) Martin Montoya (Brighton)
Brighton made about a gazillion signings this summer, but only one features in the top ten of Premier League minutes played this season for the Seagulls. And it’s a signing that largely went under the radar; hands up if you actually spotted that Brighton had signed a three-times La Liga champion for just £6.3m.

Old stager Bruno started the opening-day defeat to Watford at right-back but since then Montoya has been untouchable and for good reason. Only Anthony Knockaert has created more chances for the Seagulls, while Montoya has pulled off the incredible feat of finding a teammate with all seven of his crosses. For context, his opposite full-back Gaetan Bong has attempted 16 crosses but only twice found a teammate. With Glenn Murray up front, Montoya’s accuracy – as well as defensive nous – is invaluable.

9) Danny Ings (Southampton)
He is basically Southampton’s only hope of scoring a goal. Watching Shane Long and then Charlie Austin toil in his absence against Liverpool demonstrated the massive gulf between Southampton’s first-choice striker and the remainder of Mark Hughes’ options. He has already scored three of the Saints’ six goals this season and is pretty much half-way to Austin’s measly top-scoring total of last season.

There is even talk of an England recall for Ings and it’s difficult to argue; he has scored just as many Premier League goals this season as Harry Kane. Bizarrely, he is just one year older.

Great move by Liverpool to make Southampton rely on Danny Ings for goals and also have him unable to play against us. Guaranteed 6 points this season off these.

8) Federico Fernandez (Newcastle)
Quite frankly phenomenal against Crystal Palace – and rewarded with a clean sheet – and this has been coming; he was impressive in narrow defeat against Chelsea, Manchester City and Arsenal. Newcastle did not spend much this summer (you might have heard) but the £6m reluctantly doled out on the former Argentine international was money excellently spent.

Having watched Alfie Mawson flounder against Watford on Saturday, you would argue that Newcastle bought the better Swansea centre-half for roughly a third of the price. Against Palace, he produced 11 clearances. There was little in the way of considered passing but a great deal of in the way of thou-shalt-not-pass warrior-like defending. And who doesn’t like that?

I don’t want to get carried away but i reckon Federico Fernandez is probably the greatest centre half the world has ever seen. #NUFC

7) Felipe Anderson (West Ham)
For £36m he should be bloody good, but those who derided him as a fanny merchant with no end product might be eating their words at the end of the season. Anderson has created more than twice the number of chances of his nearest Hammers challenger, and has attempted more than twice the dribbles. He is perfect for the Hammers’ swift counter-attacking style and on Sunday he gave Cesar Azpilicueta a torrid time. And almost nobody gives Cesar Azpilicueta a torrid time.

When Anderson, Andriy Yarmolenko, Manuel Lanzini and Marko Arnautovic are all fit, the Hammers are going to have one hell of a front line. There is potential for West Ham to be second only to Liverpool in terms of the swift transition from defence to attack. Key to that is the pace and touch of Anderson.

6) Aleksandar Mitrovic (Fulham)
‘Mitrovic is as strong as an ox, brings people into play and is using his aggression in the right way,’ wrote Jamie Redknapp in his Daily Mail column on Monday. He then went on to suggest that he could be a successor to Diego Costa at Chelsea, and we have certainly heard worse ideas. Fulham are certainly set to make a hefty profit on Mitrovic, who became their permanent player for just £22m this summer after a successful loan spell.

17 – Since his debut for Fulham in Feb 2018, Aleksandar Mitrovic has scored more league goals across the top four tiers of English Football than any other player (17). Fire. pic.twitter.com/lXgAsRZs3H

The Cottagers have major defensive problems that the signings of Calum Chambers and Mawson have gone nowhere close to solving, but their only striker problem is how to replace Mitrovic if he ever gets injured. He is yet to miss a minute of Fulham’s Premier League season and has paid back that faith with five goals, making him the top flight’s joint top scorer with Eden Hazard. Just imagine if they were in the same team…

5) Joao Moutinho (Wolves)
Find me a Wolves fan who does not stop, smile to themselves and then shake their head at least once a day when they remember that European Championship-winning Portuguese midfielder legend Joao Moutinho actually plays for Wolves and I will find you a liar. It’s Joao Moutinho. Playing for bloody Wolves. And he has been predictably magnificent in a double pivot with Ruben Neves. Read about them in more depth here.

Moutinho scored a beautiful goal at Old Trafford on Saturday but he was already a Wolves hero for his set-piece delivery and the wonderful partnership he is forming with Neves which is helping to make the younger man a £100m-plus player. “It’s very good to play with Joao, he’s a very experienced player, very smart, very intelligent and it’s easy to play with him. I want to learn with him because he’s a great player,” says Neves. Damn right.

4) James Maddison (Leicester City)
He is a cocky little bugger but it’s so long since we had an English cocky little bugger that we can only be glad of his arrival at Leicester for what may soon look like a bargain £20m. “You can see from his confidence today when the ball came across and he did that Neymar thing with his leg behind the back of his other leg. I just started laughing in the game because I think that’s great,” said Jonny Evans after Maddison tricked and flicked either side of scoring his third goal of the season against Huddersfield on Saturday.

James Maddison has put Leicester into the lead against Huddersfield.

Maddison looks good. Tidy on the ball, and has a touch of the shithouse about him. The move to Manchester United can't be too far away.

Forget perennial targets Eden Hazard and Wilfried Zaha, Maddison is the most fouled player in the Premier League this season. And yet he has still created as many chances as Paul Pogba, Raheem Sterling and Moutinho. That is quite some elevated company for a 21-year-old in his first top-flight season. An England call-up surely follows.

3) Richarlison (Everton)
Everton are a striker away from being a decent side. After watching Cenk Tosun and Dominic Calvert-Lewin toil up front, Marco Silva now has a decision to make: Does he persist and hope things click or does he move Richarlison central as he looks like the only Blue likely to score? With Bernard ready to come in and take the Brazilian’s place on the left, it could be a no-brainer…but for the fact that Richarlison is making life very uncomfortable indeed for right-backs.

“Richarlison is a little bit different from the normal Brazilian player. He is a more physical player, he is not just good with the ball,” says Marco Silva. “For him, it is not important the impact and if the defenders are strong or not.” He has only been there two minutes and he is already Everton’s most important player.

Now the dust has settled, we played well but scoring evaded us and a striker in January in a necessity. Thought Digne, Gueye and Richarlison were brilliant. Keane and Davies* had a good game. Much better needed from Walcott and DCL though

* not same admin from last night

2) Jorginho (Chelsea)
Basically, he is the new Chelsea. He embodies this new Chelsea so perfectly that you wonder what Maurizio Sarri would have done with the old Chelsea if he had not managed to sign Jorginho, who is busy breaking all the records for touches and passes. Cynics may point out that very few of Jorginho’s passes come anywhere near the opposition penalty area but that is not the point of Jorginho; his vision, speed of thought and technical skill is exemplary.

You’ll never please some people though.

10 years ago this weekend Stoke made 172 passes vs Liverpool. Today Jorginho made 180 by himself vs West Ham.

The biggest problem is that Sarri-ball has killed N’Golo Kante. For that we are not sure we can forgive either Sarri or Jorginho.

1) Alisson (Liverpool)
Liverpool have allowed 15 shots on target this season – marginally more than both Chelsea and Manchester City – but have conceded just twice, with Alisson recording an 86.7% save percentage, making him ever so slightly more impressive than David De Gea (66.67%) this season. Basically, the Leicester craziness aside, he has been excellent. “I told him that the best game to do it was this one because we won it, so it’s all fine now,” said manager Jurgen Klopp.

Since then it has been more than fine and the goalkeeper travails of the last umpteen seasons are at last at an end for Liverpool. Should Liverpool win the title, the biggest lump of credit will go to a board who listened when Klopp said he had to break a world record to make his team secure. There’s no going back now.