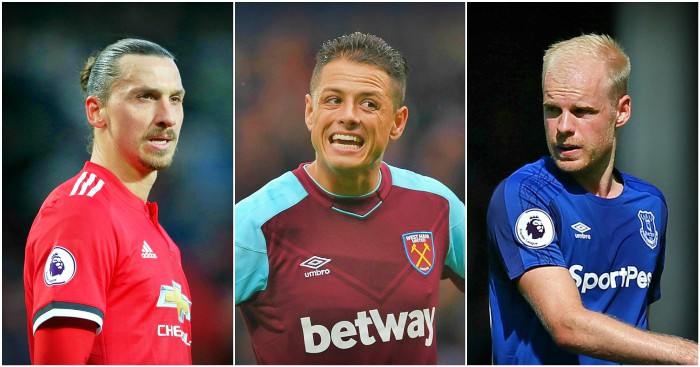 10) Andre Gray (Watford)
Before this season, Andre Gray had taken each step of his career in his stride. Failure to break into Shrewsbury’s first team at the age of 18 resulted in a couple of loan moves before he landed at Hinckley United in the Conference North. From there, he earned a move to Conference Premier side Luton Town, scoring more than a goal every two games to jump to Brentford in the Championship. Then came Burnley, promotion to the Premier League, and finally a move to Watford, his biggest club yet.

It will go no higher. The 26-year-old scored nine goals for a struggling Burnley last season, yet has just three goals in 22 games for a Watford side less organised, but more intent on attacking. It does feel as though a seemingly perennially rising star has finally reached its limit.

9) Zlatan Ibrahimovic (Manchester United)
“The boy is tired,” said Jose Mourinho last month. “He’s physically a monster, but not a machine, and he’s feeling it.” And there’s little wonder: Romelu Lukaku has played more minutes than any Manchester United player in all competitions this season, and his form has noticeably suffered as the games have piled up.

Yet the manager cannot feign surprise at such a workload. It was no secret that United would be competing for trophies on four fronts this season, and so signing an adequate alternative to the Belgian was crucial. If Mourinho cannot trust Marcus Rashford or Anthony Martial enough to play them as lone strikers, an external solution had to be sourced to grant Lukaku necessary rests.

Mourinho’s plan was flawed from the start. The return of Zlatan Ibrahimovic as a free agent was nothing more than false economy, a back-up plan that could not be enacted due to the Swede’s injury, which the manager and club knew before re-signing him. The 36-year-old rushed back from the first long-term injury of his career but for all the talk of lions and deities, Ibrahimovic, much like Lukaku, is only human. A return to full fitness is possible, but to reach even half of his ability by season’s end is unthinkable, as is his stay being extended.

So Zlatan Ibrahimović is ruled out for a month. Another injury. Sad to say, but feel like he's done now. Had a good 12 months at Manchester United, but have to look long term now.

8) Oliver Burke (West Brom)
Proof, were it ever needed, that the tendency of the great British pundit to turn his nose up at anything non-Premier League is counter-productive and close-minded. Back in September 2016, Oliver Burke took the brave and commendable decision to leave Nottingham Forest and join RB Leipzig in the Bundesliga. But the reaction was one of snobbish sneering, not due praise.

“He’s gone over to Germany and I can’t understand that, to be honest with you,” said John Hartson 18 months ago. “The Premier League is the place to be. I thought that was the next step for him. He’s gone to Leipzig, but what about a Burnley or a Sunderland or a West Brom?”

Hartson got his wish in August, Burke leaving the Bundesliga runners-up after 25 appearances, mainly as a substitute. But that volume of playing time looks positively ever-present in comparison to his one Premier League start this season. The 20-year-old deserves much better.

7) Sandro Ramirez (Everton)
Of Everton’s remarkable summer investment, one signing went somewhat under the radar. Sandro Ramirez arrived for £5.2m, less than £6m Lewis Gibson, an Under-21 midfielder signed from Newcastle in the same month.

But while Gibson was an investment for the future, Sandro was a purchase for the present. He was the supposed bargain amid a raft of eye-catching, big-money purchases. Heck, even Real Madrid supposedly fought the Toffees for his signature. There was no way such a relatively cheap signing could possibly disappoint.

Or so it seemed. But the 22-year-old has started once in the Premier League since mid-September, scored one goal in 15 appearances, and the only competition he is providing Rooney is for the wooden spoon in the 100 metre sprint.

6) Javier Hernandez (West Ham)
As discussed in 16 FA Cup Conclusions, it is simply another case of opposites repel for Javier Hernandez under David Moyes at West Ham. The Mexican suffered from a clash of styles under the Scot at Manchester United, and history is repeating itself at the London Stadium.

Moyes can hardly be blamed; he has no obligation to play with every toy he inherited. Slaven Bilic failed to get the best out of the 29-year-old, and Davids Gold and Sullivan’s search for a reliable striker continues. Hernandez is the 42nd they have signed since purchasing the club in 2010, and has gone much the same way as the previous 41.

We need to sign a striker that has a bit of pace and strength about him to partner Arnautovic.

5) Nahki Wells (Burnley)
How many minutes have you played for Burnley in the Premier League this season? Well, barring remarkable coincidence, Nahki Wells has only played 17 more. Jeremie Boga has featured more often in the top flight, as have Lemi Lumeka and Dean Whitehead. Divock Origi is only eight minutes behind.

It is safe to say the £5m move to Burnley has not gone to plan. Wells offers far more of a direct replacement for the departed Andre Gray, but Chris Wood, Ashley Barnes and Sam Vokes form a compelling, physically imposing, aerially dominant triple threat of strike options.

Did you Google Lemi Lumeka too?

4) Grzegorz Krychowiak (West Brom)
“I estimate the chances of his transfer this winter at 50 per cent. We will see what will be his situation in the next matches.”

West Brom have heeded the warning sent by agent David Manasseh earlier this month. His client, Grzegorz Krychowiak, played the full 90 minutes in the 2-1 defeat to West Ham, before featuring for 85 minutes in the FA Cup victory over Exeter. Remarkably, that was the first win the Pole has played a part in at club level since March of last year. With his 28th birthday falling later this month, two starts might not be enough to persuade him that four more months under Alan Pardew is what’s best for his career.

3) Kelechi Iheanacho (Leicester)
From scoring as many goals as Kevin de Bruyne in all competitions (7) at Manchester City last season to scoring as many goals as Ahmed Musa (1) for Leicester this. One of ten players we were looking forward to watching last September, Iheanacho left City with Pep Guardiola’s blessing. A buy-back clause was inserted into a £25m deal, a carrot for the Nigerian to pursue.

It really has not gone to plan. Claude Puel’s devastating simple assessment – “It’s difficult because he’s behind Jamie Vardy. Shinji Okazaki is also playing well. And there is also Islam Slimani” – goes some way to explain Iheanacho’s conundrum. The 21-year-old featured as a substitute in each of the manager’s first three Premier League games, but has only been seen in the Carabao and FA Cups since.

2) Davy Klaassen (Everton)
As Monaco learned last season, Juventus the season before and Atletico Madrid in 2015/16, success in European competition almost always comes at a cost for clubs outside the elite. Ajax were not completely decimated by the continent’s vultures after reaching the 2017 Europa League final to Manchester United, but they did lose four of their starting line-up and two substitutes in the summer transfer window.

Kasper Dolberg was kept from the clutches of United, but Heiko Westermann, Kenny Tete, Bertrand Traore, Jairo Riedewald and Davinson Sanchez all departed for pastures new. The biggest loss was perceived to be that of captain Davy Klaassen.

That may still be true, but Ajax’s biggest loss has not even been a marginal gain for Everton. The attacking midfielder is a curious mixture of youth and experience, a 24-year-old who had already been captain in a European final, with 194 career appearances to his name. He was the jewel in the Ajax crown, a player compared to Xavi and Toni Kroos by Johan Cruyff. But he has been lost in a sea of No 10s at Everton, slowly losing his place under Ronald Koeman before not making a single Premier League match-day squad appearance under David Unsworth or Sam Allardyce.

1) Jese Rodriguez (Stoke)
It is the transfer coup gone terribly wrong for Stoke. Jese Rodriguez started life as a Potter in wonderful fashion, the former Real Madrid star scoring three days after joining on loan, having trained with the club just once, against Arsenal in August. But the sum total of his later contribution to the cause is one assist in eight games.

The premature birth of Rodriguez’s son, and the 24-year-old’s subsequent need to return to Spain at regular intervals, has made success on the pitch almost impossible. The cancellation of his loan stay at the Bet365 Stadium, and a second loan spell with hometown club Las Palmas in the space of 12 months, is inevitable. And yet the player PSG signed for £21.2m in summer 2016 would still not be one of the eight most expensive loan players in history.