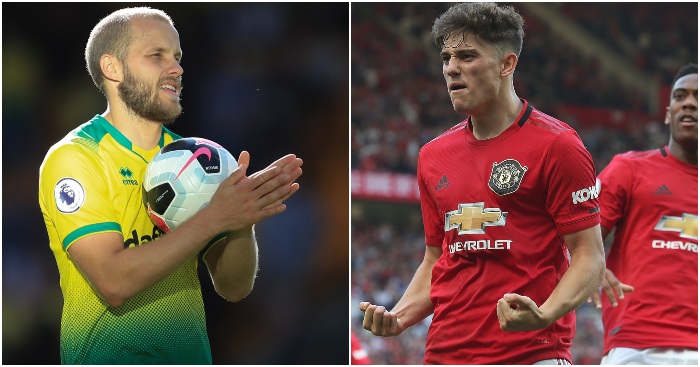 10) Sheffield United
Not everyone has been surprised by the Blades but some pundits with a more lax approach to their research have certainly been caught on the hop. “It’s not the most glamorous way of playing. They might play a little direct at times,” suggested Danny Mills before the season, comparing Chris Wilder’s apples with Neil Warnock’s oranges at Cardiff. He wasn’t the only one: Garth Crooks labelled the Blades as “basic”.

Marcelo Bielsa said United were one of the teams he admired last season so you can bet Crooks and Mills haven’t been paying attention to Wilder’s overlapping centre-backs. No one who watched them in the Championship doubted their approach; the only slight question mark at the start of this season surrounded their courage in sticking to the same principles. Their performances to get points at Bournemouth and Chelsea while beating Palace demonstrated that the Premier League holds no more fear for Wilder than the Championship.

And if you haven’t seen it, here’s Oliver Norwood winning Pass of the Season on matchday two…

Match of the day didn’t talk about this pass from Norwood once, you know for a fact if that was De Bruyne you wouldn’t have heard the end of it #sufc #twitterblades pic.twitter.com/pWM9QaLC91

9) Liverpool’s defence
Last season’s most miserly defence took four games to keep their first clean sheet while conceding goals to Norwich, Southampton and Arsenal. Their uncharacteristic generosity hasn’t cost them any points, but it won’t have escaped Jurgen Klopp that five teams have allowed fewer shots per game this term, with Liverpool offering 10.5 attempts per match – the same number as Premier League new boys Sheffield United (see above).

Klopp will offer mitigation. The Reds boss has squeezed his back four up the pitch this season while employing a higher defensive line. His four starters certainly have the pace to recover their ground should opponents spring the offside trap, as a few have already, but Klopp’s back-ups don’t possess the same lightning speed that the likes of Virgil van Dijk, Joe Gomez, Andy Robertson and Trent Alexander-Arnold can call upon. With a 100% record, Klopp is hardly losing sleep, but tightening up what was the league’s best defence remains an early-season priority.

8) Martial through the middle
Since he took over at Manchester United, Ole Gunnar Solskjaer has made a big thing of using Marcus Rashford as a centre-forward. The England striker was shunted out wide for much of Jose Mourinho’s reign but as soon as Solskjaer arrived, Romelu Lukaku was shuffled towards the door and Rashford had his chance.

With Lukaku sold and no striker bought to replace him, it was assumed that Rashford’s position was secure. But for much of the first three games, which took in a win, a draw and a defeat, Rashford was back out wide (he’s not a No.9) while Anthony Martial claimed what he believes is his rightful place at the head of United’s attack. Only when Martial missed the trip to Southampton through injury did Rashford start down the centre.

Rashford is rather more willing to play off the left than Martial, who now has to seize his opportunity if indeed he really does want to nail down the central striker’s role. Too often with the Frenchman, it’s hard to tell. Regardless, Solskjaer has already urged the pair, as well as their team-mates, to sharpen up their act in front of goal.

7) Bjorn Engels
Villa signed three centre-backs this summer and the assumption was that Engels might find himself the odd man out after Dean Smith bought Ezri Konsa from his former club Brentford. But Engels, the cheapest of the trio at £7million from Reims, has been the stand-out performer in Smith’s defence, taking to the Premier League like a 6ft 4in duck to water.

So impressive has Engels been during his opening four games in the Premier League that he was said to be on the verge of a Belgium call-up for the current international break. Should the 24-year-old continue his current form, it will be only a matter of time before Roberto Martinez is on the phone.

6) Mason Mount
Tammy Abraham’s opportunity has come through necessity but the same cannot be said of Mason Mount. If there is one area in which Frank Lampard is not short of options – despite the Blues’ transfer ban – it is in midfield, so Mount’s emergence this season in preference over more senior team-mates is testament to the belief the manager retains in the 20-year-old.

Perhaps we shouldn’t be quite so taken aback considering Lampard knows Mount better than any of the other Chelsea players. The newly-capped England international played under the Blues’ new boss at Derby last season and when the alternatives are Mateo Kovacic’s brand of inconsistency or that of Ross Barkley, you can’t blame Lampard for sticking to what he knows.

Opting for youth also offers Lampard a shield to hide behind while his opening results have been somewhat underwhelming, but Mount has been one of his standout performers either in the No.10 role or starting from the left.

5) Caglar Soyuncu
When Harry Maguire finally walked out of Leicester, it was assumed Lewis Dunk or James Tarkowski would stroll through the door before it had chance to close. But with Brighton and Burnley demanding at least half of the Foxes’ Maguire-sized windfall, Leicester opted to keep the money in their pocket and put their faith in one of last season’s big signings.

Soyuncu made only four Premier League appearances in his maiden year in English football, a tally he matched before September this time around. The 23-year-old has played every minute under Brendan Rodgers this term and so impressive have been his displays that the Turkish centre-back was crowned Leicester’s Player of the Month for August. If Soyuncu can maintain his consistency, Leicester have saved themselves a fortune.

4) Watford’s poor start
Javi Gracia looked to be one of the safest managers in the Premier League prior to the start of the season but when the bullet came, perhaps the only surprise was that it took the Hornets so long to squeeze the trigger.

Watford are a side now accustomed to starting well even if they have a habit of tailing off. The fixture list again looked conducive to flying out of the blocks, so one point from home games against Brighton and West Ham together with trips to Everton and Newcastle is perhaps eight or nine fewer than they might have been hoping for.

It was reported that Watford acted amid fears that the team had ‘gone flat’ under Gracia and 18 months is around the average attention span for most Premier League players under any manager. But this was one who was handed a four-and-a-half-year contract only last November amid links with Chelsea. Perhaps some reversion to the mean was to be expected, especially after a poor second half to last season. But few can say they expected a drop of the magnitude which has prompted a return for Quique Sanchez Flores.

A column on Watford, who now face the Southampton conundrum: Outside the top six, there are no safety nets against gambles and mistakes – you die by the sword you live by.https://t.co/bAZAn76VfV pic.twitter.com/vBaxEztExD

3) Crystal Palace
Palace certainly had us fooled. When we watched them against Sheffield United in their second match of the season following their failure to crack a ten-man Everton side at home on the opening weekend, they were, to put it mildly, absolutely dog sh*t.

So bad were they that it was too easy to forget how impressive they were against the top-six sides last season so at Manchester United the following week, the Eagles were given almost no chance. But Roy Hodgson somehow reinvigorated his men to bloody another big nose. Then they followed it up against Aston Villa at home, which may be no huge shock, but Palace sitting in fourth place after four games was predicted by precisely no one, especially after two matches.

Last team to win a Premier League game away at…

2) Teemu Pukki
Norwich were banking on Pukki finding his feet quickly in the Premier League, but five goals and an assist in his opening four games at the highest level were perhaps not part of the plan. The Finland striker has played a direct role in all the Canaries’ goals so far this term.

Not that his former national team coach is surprised. “Can he score in the Premier League? For me, yes,” said Mixu Paatelainen. “He is a quick player who likes to run in behind, so he is made for counter-attacking tactics.” Not many teams will sit back against Norwich so Pukki should be right at home all season. No reason why he can’t keep up his current rate and finish the season with 48 Premier League goals then…

1) Daniel James
There were few doubts over how quickly Harry Maguire and Aaron Wan-Bissaka might settle at Old Trafford but James came with no guarantees whatsoever. As a youngster stepping up to the Premier League for the first time, it was thought he might be eased in gently, but James’ form – and that of United’s few alternatives – has made it impossible for Solskjaer to ignore him.

In four games including three starts, the 21-year-old summer recruit from Swansea is United’s leading scorer with three goals. Already he has matched Alexis Sanchez’s Premier League tally for the Red Devils and the flying winger will probably be the first name in Solskjaer’s attack when he sits down to write his team sheet for Saturday’s visit of Leicester to Old Trafford. Anyone who didn’t get even a slight tingle upon seeing James open his account on his United debut at the end of summer during which he lost his father is probably dead inside.