Home Uncategorized Top Ten: The best keepers from the 1990s 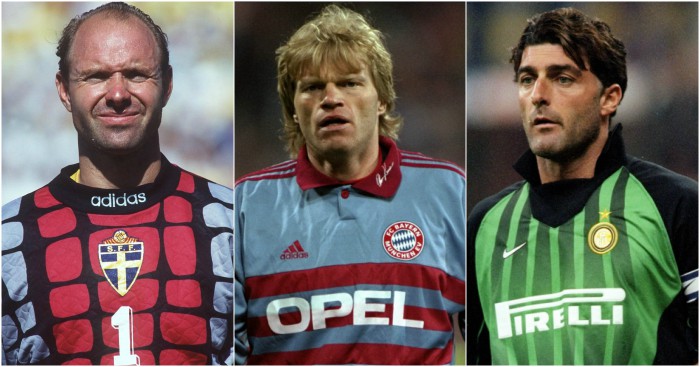 Peter Schmeichel is still widely regarded as the best goalkeeper to have ever played in the Premier League, but he certainly wasn’t the only outstanding stopper of the 1990s.

If you hadn’t guessed already, I love the 90s. I’ve chosen my favourite playmakers, favourite kits and favourite cult teams from the decade, and now I’ve picked out the 10 goalkeepers I remember most fondly.

Every list is subjective and open to debate, of course, and this one is no different, but here goes nothing…

10) Claudio Taffarel
Brazil are hardly known for their proficient goalkeepers, but Taffarel merits a better reputation than simply being the tallest dwarf. Only three players (Cafu, Roberto Carlos and Lucio) have earned more caps for the Seleção.

Taffarel’s international career began in 1988, and his first major tournament was the 1989 Copa America. He would play in five Copa Americas and two World Cups, Brazil’s first choice as they won in 1994 and lost the final to France in 1998. It was his penalty saves in the semi-final shootout against Netherlands that took Brazil through.

Domestically, Taffarel split his time between Italy, Brazil and Turkey, enjoying a three-year spell with Galatasaray between 1998 and 2001 during which he won two league titles, two domestic cups, the UEFA Cup and UEFA Super Cup.

Individually, Taffarel was named the third best goalkeeper in the world in 1991 and 1994.

9) David Seaman
It is extremely difficult to judge Seaman’s true place on this list, purely because I have seen far more of him than any other goalkeeper. There is a tendency to underrate English players in comparison with foreign fancies, or overrate them out of patriotic pride; the balance is hard to get right.

What is certainly true is that Seaman was one of England’s best goalkeepers of all time, and a crucial ingredient of Arsenal’s success under Arsene Wenger. He certainly enjoyed his peaks at club level rather than in an England shirt, but the same can be said for virtually every player of that generation.

“He’s still the best goalkeeper in England,” said Wenger of 39-year-old Seaman in 2002.

“I’m very proud of him. He has shown again the calm, the authority and the responsibility on the pitch and that’s what you want from a super professional. It’s about showing how strong you are on the pitch and he’s done that again today and he has always done that since I was at Arsenal.”

8) Andreas Kopke
Probably the most easily overlooked of all the great goalkeepers of the 1990s, Kopke was after Bodo Ilgner and before Oliver Kahn yet still managed 59 caps and played a vital role in German major tournament success.

Named as German Footballer of the Year in 1993, Kopke did not establish himself as national team No.1 until after World Cup ‘94.

He made up for lost time through his brilliance during Euro ‘96 – sorry, Gareth Southgate – and being named as Europe’s and the world’s best goalkeeper in that same year.

He made his mind up to retire after the 1998 World Cup – for which he was also first choice – in order to allow the developing Kahn to take his place. He became the Germany goalkeeping coach in 2004, a position he still holds.

7) Gianluca Pagliuca
There were a plethora of Italian goalkeepers vying for a place on this list, with Angelo Peruzzi the most obvious rival to Pagliuca, but I’ve gone for the man with the fifth most appearances in Serie A history and the most penalty saves.

Pagliuca also represented Italy at three different World Cups. He earned 13 of his 39 caps in 1994 alone; there has never been more competition for one position in the game’s history than for the Italy No.1 shirt in the early 90s.

Nicknamed The Wall, Pagliuca was a very modern goalkeeper even in the late 1980s, used by Arrigo Sacchi and Sven-Goran Eriksson as a sweeper-keeper behind a flat back four, but it was his reaction saves that earned him the most plaudits.

He became the most expensive goalkeeper of all time when moving from Sampdoria to Inter in 1994, having won the Serie A title and Cup Winners’ Cup with Samp and also reaching the European Cup final in 1992.

Impressively, Pagliuca then moved to Bologna in 1999 shortly before turning 33, yet still played more than 300 games in Emilia-Romagna.

The Paraguayan began his career in 1982 and did not retire from international football until 2003. He captained his country at two World Cups and three Copa Americas, and was named as the world’s best goalkeeper in 1995, 1997 and 1998.

Add in a South American Footballer of the Year award and a selection in the Team of the Tournament at the 1998 World Cup, and it is clear we are not merely dealing with a cartoon character keeper.

Yet that is Chilavert’s lasting legacy. He enjoyed dribbling out of defence in a similar style to Rene Higuita (who just missed out on this list), but it was his free-kick and penalty-taking ability that is most memorable.

In 1999, he became the first goalkeeper in the history of the game to score a hat-trick, and ended his career with 67 goals.

Ravelli was a throwback to a time before blanket coverage of foreign leagues, when you only saw certain players at major international tournaments and European finals. He spent his entire career in Sweden with Oster and Goteborg, save for a brief spell in MLS with the Tampa Bay Mutiny.

In the latter, he saved two Romanian penalties as Sweden reached the semi-finals, and was thus named second best goalkeeper in the world, and by France Football as the seventh best player in Europe.

4) Edwin van der Sar
Some will say that Van der Sar peaked at Manchester United, while others will say he achieved the most at Juventus, and thus does not merit representation in a list of 1990s goalkeepers. The Dutchman did not arrive in Italy until six months before the end of the decade.

Yet Van der Sar achieved enough at Ajax to warrant selection. He won the UEFA Cup and Champions League in 1992 and 1995, and was named as the best goalkeeper in Europe in 1995. He was also named Dutch Football Goalkeeper of the Year four times in succession.

Van der Sar was the goalkeeper as Netherlands were eliminated from three successive major tournaments on penalties, but you can blame the abject penalty-taking of his team-mates for that.

Named best goalkeeper at the 1994 World Cup ahead of Taffarel, Pagliuca and Ravelli on this list alone, Preud’homme was a behemoth of Belgian goalkeeping.

He played only 58 times for his country across a 15-year international career that ended in 1994, but he would play for Benfica until 1999.

Named as Belgium’s best player in 1987 and 1989, Preud’homme still packed enough into the 90s to merit selection this high up the list, and 1994 was his annus mirabilis.

As well as being picked in the World Cup All-Star team, he was named both the best goalkeeper in Europe and the world. That earned him the move to become Benfica’s first ever foreign goalkeeper. He became known as ‘Saint Michel’ in Portugal.

A man who needs no introduction, Kahn is one of the most decorated players in German football history. He won eight league titles, six domestic cups, the UEFA Cup and Champions League while at Bayern Munich, and was named UEFA’s best goalkeeper four times, a record until Manuel Neuer surpassed him last year.

Kahn is also the only goalkeeper to be named the best player at a World Cup finals, when his form took Germany to the final in 2002, and he was named by the International Federation of Football History and Statistics (IFFHS) as the fifth best goalkeeper of the 21st century.

Including Kahn in a list of 90s goalkeepers might seem a push, but he still had six years as Bayern’s No. 1 in that decade and five of his 11 years as a German international, although he would not become first choice until 1998. If only England could have that strength in depth now.

Alex Ferguson didn’t get much wrong, but I’d have to disagree with the assessment in his autobiography when Fergie omitted Schmeichel from a list of world-class players he managed at Manchester United.

Schmeichel was not just United’s last line of defence during the club’s most successful years, but their warrior and inspiration.

More accurate was Ferguson’s tribute to Schmeichel in 2000, when the goalkeeper was awarded an MBE.

“It’s terrific for him and is reflection on his great career,” he said. “He was tremendous value to this club when he was here. He had an immense presence. His record was marvellous. During his time here he never finished lower than second in the league, and his international career was incredible.

“He has won something like 102 caps, and winning the European Championship with Denmark was a tremendous achievement when everybody thought they had only gone along there for the trip.

“He’s had an amazing career and I am very proud of him and very pleased for him and his family.”

Both the best signing Manchester United have ever made, and their greatest goalkeeper.