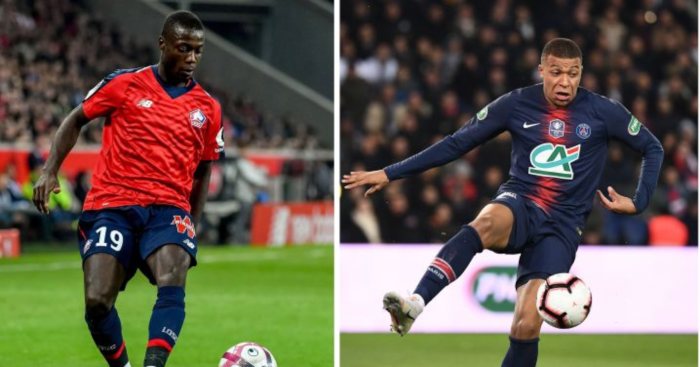 We’ve limited our search to the top ten leagues of Europe, so we’re acknowledging Belgium and Portugal but we will have no truck with Lithuania, Latvia or Scotland. Here are the ten players who are 23 or under with at least 14 league goals this season.

Oh and for the record, the top Premier League goalscorer this season in this age bracket was Everton’s Richarlison with 13…

Absolutely. There's a guy called Jean-Philippe Mateta who plays for Mainz in Germany who reminds me a bit of Wilson if still a bit raw but he is only 21. He's got 14 goals, the same amount as Callum Wilson this season

9) Henry Onyekuru (Club: Galatasaray, Country: Nigeria, Age: 21, Goals: 14)
It doesn’t get much better than scoring the goal that wins your club the double; it’s little wonder that Galatasaray want to keep the Everton striker for another year. But that surely depends on whether the Toffees can secure a work permit for the the Nigerian and whether they can trim their squad. This is what Marco Silva said: “I didn’t decide yet. At this moment we have four wingers in our squad – Richarlison, Lookman, Bernard and Theo – four with right foot and he is one more with a right foot. We would have to think about a work permit, also.”

We’re not gonna see Onyekuru ever play for us are we?

8) Moussa Dembele (Club: Lyon, Country: France, Age: 22, Goals: 15)
“I’m happy to stay with Lyon next season but we’ll see,” he said after scoring 15 Ligue Un goals following his £19.7m move from Celtic last season. Manchester United are said to be interested in the Frenchman, who has scored three goals in four games as Lyon secured a third-place finish and a return to the Champions League.

Moussa Dembélé is one of the most all round forwards in Europe.

Can play equally well back to goal and running in behind which is rare.
Great finisher as well and good to take on defenders.

7) Joao Felix (Club: Benfica, Country: Portugal, Age: 19, Goals: 15)
The latest reports suggest that Manchester United are prepared to smash the British transfer record to sign a 19-year-old with just 43 senior matches. That those 43 matches have reaped 20 goals has certainly piqued the interest of United. Over £100m for a player not get capped by his country? Wowzers.

Really hope United sign that João Félix kid from Benfica. For two main reasons. a) His name has loads of hats in it so you know he's bound to be good b) he seems like the kind of scrawny player City sign & we end up ruing for the next decade. And I am bloody SICK of ruing things.

6) Andrea Petagna (Club: SPAL, Country: Italy, Age: 23, Goals: 16)
After scoring a pretty paltry nine Serie A goals in two seasons, Atalanta loaned Petagna to SPAL, where he has promptly scored 16 goals in one eye-catching season. The Italian minnows have an obligation to buy this summer for 10 million Euros but could make a pretty swift profit with Leicester said to be ready to pay double that amount as they look to replace the outgoing Shinji Okazaki.

A striker I think could be really useful for us is Andrea Petagna of SPAL. Rated him when he played both games for Atalanta against us in the Europa League and hes just scored 16 in 35 for one of the lower half teams in Serie A aged 23. Reminds me of Lukaku the way he plays

5) Timo Werner (Club: RB Leipzig, Country: Germany, Age: 23, Goals: 16)
“Our position is that if he does not renew the contract, he should change clubs,” said RB Leipzig boss Ralf Rangnick this week. “He has let us know and implied that he will not renew the contract.” Werner’s current deal expires this summer and the Bundesliga club are desperate to sell now rather than face an Aaron Ramsey situation next summer. Liverpool and Bayern Munich have of course long been linked with a player who already has 24 Germany caps, but the Reds are thought to be looking at cheaper options.

As things stand, Nabil Fekir, Julian Brandt and Timo Werner are not targets. One, maximum two signings – and for fees unlikely to surpass, for instance, the £13m Liverpool spent on Xherdan Shaqiri last summer.

4) Kai Havertz (Club: Bayer Leverkusen, Country: Germany, Age: 19, Goals: 17)
This kid looks good. It’s little wonder that Germany thought they were safe to get rid of some old-stagers when they have this kind of talent coming through. Already a record-breaker with 17 Bundesliga goals as a teenager, he has been described by Rudi Voller thus: “Kai has exceptional abilities and is already blessed with a footballing maturity that sets him apart from other players of his age.” And who is his hero? Mesut Ozil, of course. And who are the favourites to sign him? Bayern Munich, of course. It was ever thus.

3) Luka Jovic (Club: Eintracht Frankfurt, Country: Serbia, Age: 21, Goals: 17)
After eight Bundesliga goals last season – the first year of his loan spell from Benfica – came an extraordinary second season that has reaped 17 top-flight goals and another ten in the German club’s march to the Europa League semi-finals. Thanks to a lovely deal made before anybody knew Jovic was going to be a goal machine, a permanent deal was done for about £5m. And now they reportedly want over £60m from Real Madrid. And why not? He’s one of Europe’s hottest young talents.

On a potential deal: “It’s not agreed right now. There are some talks behind the scenes.”

Ask him to confirm specific talks with Real: “No (talks) but we know the interest is here.” pic.twitter.com/q5Yo6qUoPK

2) Nicolas Pepe (Club: Lille, Country: Ivory Coast, Age: 23, Goals: 22)
A goalscoring winger, you say? These players are like gold dust so Manchester United and Arsenal are said to be very interested indeed. The problem for Arsenal is that he will cost around £70m, two years after he joined Lille from Angers for around £9m. “Nicolas Pepe will leave,” confirmed Lille manager Christophe Galtier. “Life’s like that, football’s like that today. ‘He is a player of the highest level who will have a big decision to make on the choice of his next club. There will be a battle between the great European teams.” Oh and Manchester United.

Adrien Rabiot and Nicolas Pepe are both positionally the type of players #MUFC should be considering. Rabiot would he the perfect partner for Pogba in the middle and Pepe would be the right-sided forward the team has missed for years. They'd be excellent additions to the squad.

1) Kylian Mbappe (Club: PSG, Country: France, Age: 20, Goals: 32)
Look at his age. Look at the gap to second. He’s already one of the best players in the world. And he’s only going to get better.