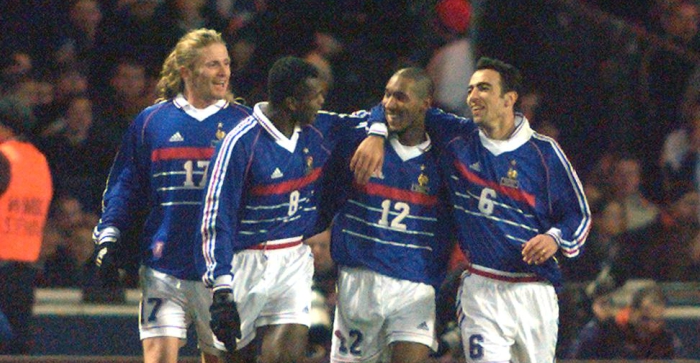 We are not necessarily talking the best signings here, nor the most expensive. Just the biggest…

10) Thomas Helveg (Norwich, 2004)
In May 2004, Thomas Helveg was playing with Javier Zanetti, Fabio Cannavaro and Alvaro Recoba, finishing fourth in Serie A with Inter Milan. By June, he was impressing for European Championship quarter-finalists Denmark. A month later, he signed up for a Premier League relegation battle with Norwich.

At 33, the right-back was undeniably past his Champions League-winning prime. Yet at 33, he would have been one of the youngest defenders in Serie A. Instead, he joined Nigel Worthington’s side in the same summer as Simon Charlton and Youssef Safri. The inevitable 19th-place finish ended a bizarre career trajectory for the one-time Danish Footballer of the Year.

The highlight of Helveg’s time at Carrow Road is difficult to pinpoint. His heroic 90 minutes in a 2-0 win over Manchester United in April 2005? The memorable tussles with Marc Edworthy for a place at right-back? Or the fact that he was injured for the 3-2 defeat at home Manchester City in February, thereby missing Delia Smith’s half-time shenanigans? Where are you indeed.

9) Stefan Schwarz (Sunderland, 1999)
Football’s long and illustrious history is littered with myths that have become readily accepted as facts over the course of time. Ian Rush never described moving to Italy as “like living in a foreign country”; Denis Law did not relegate Manchester United; Faustino Asprilla did not cost Newcastle the title in 1996. But Sunderland did include an anti-space clause in Stefan Schwarz’s contract when signing him for a club-record fee in 1999.

“One of Schwarz’s advisers has, indeed, got one of the places on the commercial flights,” said chief executive John Fickling at a time when public travel to the cosmos was a thing. “And we were worried that he may wish to take Stefan along with him. So we thought we’d better get things tied up now rather than at the time of the flight. It was a reasonable request.”

He had a point. Sunderland spent a club-record fee of £4m to bring in Schwarz on a four-year deal. The 30-year-old was a seasoned veteran from his time at Malmo, Benfica, Arsenal, Fiorentina and Valencia, a crucial part of Sweden’s third-place finish at the 1994 World Cup. You try telling Peter Reid he can’t use one of his best players because he’s quite literally out of this world.

8) Bryan Roy (Nottingham Forest, 1994)
By Frank Clark’s own admission, Nottingham Forest got things “the wrong way round” when it came to making their ambitious move for Bryan Roy in the summer of 1994. “We have still to agree a fee with Foggia,” noted the manager, but the player’s heart was set.

It was a curious move. Roy was 24, a UEFA Cup winner with Ajax two years prior, wanted by Parma, Napoli and Inter Milan and playing in his second World Cup with the Netherlands. He would also not come cheap; the fee would eventually amount to a club-record £2.9million – or Forest’s entire transfer budget upon promotion to the Premier League.

It was a monumental gamble, but a calculated one. The winger was used centrally in a lethal partnership with Stan Collymore, netting 13 goals in his first season as Forest finished third. It remains the highest Premier League placing for a promoted club in their first season, made more remarkable that Roy was their only first-team signing.

7) Gary Medel (Cardiff, 2013)
Cardiff had already broken their transfer record twice in the same summer by the time Gary Medel completed the hat-trick. The Bluebirds kickstarted their investment after promotion with the arrival of striker Andreas Cornelius, quickly supplemented by the signing of centre-half Steven Caulker. Medel was the last addition to an entirely new spine in the space of a month.

The midfielder had cultivated quite the reputation in South America and Spain. If his early years with Universidad Católica and Boca Juniors helped strengthen the steely exterior, two-and-a-half years with Sevilla added bark to the well-established bite of ‘El Pitbull’. He featured in the Champions and Europa League, helping the Andalusians secure fifth and consecutive ninth-placed finishes in La Liga There were even suggestions that Xavi had asked Barcelona to sign a player Unai Emery described as his “pivot”.

“I thought he was an important player to lose,” Emery would add after selling his gold Medel. The Chilean’s stay in the Welsh capital was brief, but his arrival was no less impactful.

6) Rui Patricio (Wolves, 2018)
If it eventually transpires that Wolves have to pay £48million for the services of Rui Patricio, it will certainly take plenty of the gloss off a silky piece of transfer business. But the negotiations had already been tainted by claims from erstwhile Sporting Lisbon president Bruno de Carvalho, accusing Jorge Mendes of “blackmail”, “threat” and “crime”. Scratch the surface only briefly, and this had all the markings of the murky transfer underworld.

Wolves will quite rightly ignore the detractors. Whatever role agent and club adviser Mendes played matters not to them when the reliable Fiat of John Ruddy has been ruthlessly upgraded to a cut-price Ferrari. And there are no dodgy brakes or cracks in the windscreen to drive the costs down; Patricio is automatically one of the better goalkeepers in the Premier League upon his arrival.

The 30-year-old was named in the 2017/18 Europa League Squad of the Season, has just partaken in his second World Cup tournament and played every minute of Portugal’s march to the Euro 2016 title. In the current market, Sporting’s £48m demands do not seem so far-fetched for a player Wolves have signed for free.

5) Esteban Cambiasso (Leicester, 2014)
At one stage, Esteban Cambiasso and Lionel Messi were neck and neck. By summer 2014, both had won 20 trophies throughout their club careers, from numerous league titles to Champions League crowns. They both trailed compatriot Alfredo di Stefano (21), but were level on the podium when it came to the most decorated players in Argentina’s history.

Cambiasso sacrificed his chances of adding to that tally when it came to choosing his path after Inter Milan. Four years after playing an integral role in their Treble-winning campaign, his contract with the Nerazzurri had expired and a renewed offer had not been tabled. He still started 32 Serie A games as captain in his final season, and was available for free at 33. Clubs should have been pushing and shoving to form a queue across Europe and South America.

It is almost unfathomable that a newly-promoted team managed by Nigel Pearson could force their way to the front. But the thrill, according to the player himself, was in the chase. “The first option was Cambiasso, the second option was Cambiasso,” he said. “When I knew this I called my agent and I said, ‘we go there’.

If the immediate impact was predictably impressive, the aftershock was even greater. Cambiasso helped drag the Foxes to safety with some inspirational performances during their incomprehensible late-season surge, but left a gaping hole upon his departure after just one season. A diminutive unknown by the name of N’Golo Kante would arrive to replace Cambiasso, who had unwittingly penned the first chapter in a remarkable success story.

4) Youri Djorkaeff (Bolton, 2002)
With 12 games left to play of the 2001/02 Premier League season, newly-promoted Bolton were teetering on the edge. They were 17th, three points above Blackburn and keeping their heads above water just long enough to catch their breath. The manager needed something to push them over the line, not quite a last roll of the Sam Allardyce, but close.

If supporters were buoyed by the January arrival of 1996 UEFA Cup Winners’ Cup champion and former Serie A winner Bruno N’Gotty, the best was yet to come. “He is an outstanding, world-class player and a World Cup winner, and perhaps the biggest signing in the club’s history,” grinned Allardyce the following month, unveiling and unleashing the unwitting Youri Djorkaeff.

The Frenchman had played all but one of Les Bleus’ 13 games en-route to World Cup and European Championship glory mere years earlier, and was snapped up on a free transfer from Kaiserslautern after a high-profile falling-out with Andreas Brehme. Djorkaeff scored four goals in Bolton’s final 12 games as they edged to safety; the foundations for an iconic team were in place.

3) Nicolas Anelka (Manchester City, 2002)
Ever the shrinking violet, Nicolas Anelka did not hide the fact that Manchester City was not his first choice of destination in the summer of 2002. “Why didn’t I stay at Liverpool after having achieved what I wanted to do – to play, score and relaunch my career?” Anelka asked the Daily Mirror. “I cannot answer that. It is better to put the question to Gerard Houllier because I really wanted to stay.”

The problem was that Gerard Houllier clearly felt otherwise. Liverpool opted to sign the much more level-headed El Hadji Diouf instead of making their loan move for Anelka permanent. The striker was therefore left with a dilemma, unwanted by Paris Saint-Germain and with a burgeoning reputation as a nuisance.

Kevin Keegan took the gamble. He almost tripled City’s club-record fee just a month after they sauntered to the First Division title, bringing Anelka in for £13m. The BBC reported at the time that “the sales pitch also included a video of last season’s promotion highlights”, because showing Kevin Horlock scoring the only goal in a 1-0 win over Crystal Palace is the only way to a man’s heart.

2) Edwin van der Sar (Fulham, 2001)
When Fulham finally reached the promised land of the Premier League in 2001, they were one year ahead of schedule. Mohamed Al-Fayed outlined his hopes for the club when he purchased them upon their promotion from Division Three in 1997, including a five-year plan to take them to the top flight. He would finally realise his dream with Jean Tigana’s free-scoring side at the turn of the milennium.

Far from slowing down, Al-Fayed simply used it as an excuse to accelerate his spending. A French influx saw Steed Malbranque, Sylvain Legwinski and Steve Marlet all arrive and Fulham spend less (£32.3m) than only Manchester United (£58.6m) that summer.

The marquee signing was Edwin van der Sar, a Champions League winner and Netherlands No. 1, forced out of Juventus by their world-record purchase of Gianluigi Buffon. One Old Lady’s trash was another handful of European giants’ treasure, as Liverpool and United courted the then-30-year-old. But it was Fulham who shelled out just £7m to upgrade ever so slightly on Maik Taylor.

1) Juninho (Middlesbrough, 1995)
It is only natural for a club to exaggerate the impressive nature of their transfer business. It helps fuel the excitement of supporters to flex muscles both financially and figuratively, and appeases those in the boardroom and dugout with regards to investment. The inevitable result is the most modern of debates to decide which team has ‘won’ the transfer window.

There was no exaggeration, no hyperbole when it came to Middlesbrough’s purchase of Juninho in 1995. “We have beaten all the top Premiership clubs and several big European clubs to his signature,” stated chief executive Keith Lamb, adding that the Brazilian was “the most sought-after player in the world”.

Juninho was most certainly the beauty, a 22-year-old Brazil international and serial trophy winner with São Paulo. Boro were the beast, a newly-promoted team housed in a post-industrial town in England’s grim north-east, a place more synonymous with chimneys than churrasco. It was a true mismatch made in heaven, the most unexpected of holy unions.