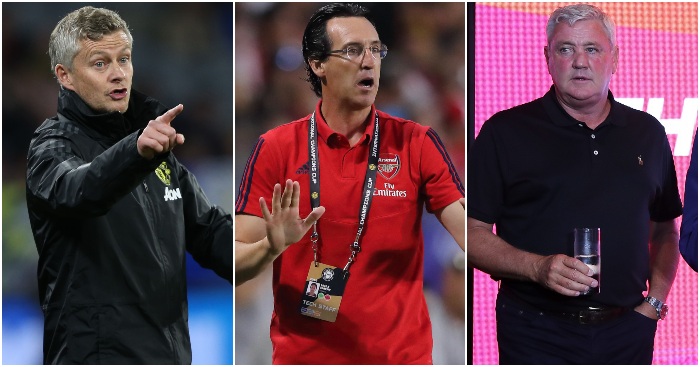 10) Manchester City – centre-back
Pep Guardiola has admitted he would like to sign a centre-back before the start of the season, though he demonstrated last summer that he won’t go into the market if the right target is not available. But with Vincent Kompany having departed, lingering doubts over Nicolas Otamendi’s future and John Stones’ form falling off a cliff during the final months of last season, it may be a gamble to go into the season without reinforcing his defensive options.

There are some potential internal solutions. Guardiola can now afford to move Fernandinho back following the arrival of Rodri, while the manager referred to “two young players in the second team” – presumably Eric Garcia and Taylor Harwood-Bellis – who could plug whatever gaps may arise. But with Champions League glory the stated aim and Liverpool hot on their tails domestically, there is no question that Guardiola is currently weaker in defence than he was at the end of last season.

9) Norwich – defensive midfielder
In contrast to Sheffield United (who have broken their transfer record three times) and the Premier League’s biggest spenders Aston Villa, Norwich have chosen to keep their powder dry this summer, with Daniel Farke for the most part choosing to trust the players who won him the Championship title. The Canaries have signed a goalkeeper and right-back to push those already in place, while Farke has bolstered his his attack with the arrivals of Patrick Roberts and Josep Drmic. Their total spend? About £1million.

Despite that tiny outlay and the fact many of Farke’s men are untested at the top level, there are few holes in the Canaries squad. One area still ripe for improvement, though, is in front of the defence, where Farke will rely on Tom Trybull and Alex Tettey. The German manager may well go with what he has for the first half of the season – similarly at centre-back – unless a cost-effective option presents itself between now the day before they start their Premier League campaign against Liverpool at Anfield.

8) Arsenal – winger
How far can any club make £40million stretch in the current market? So far, the closest deal to completion appears to be for William Saliba – an 18-year-old centre-back who will be returned to sender until this time next year. In addition to strengthening the centre of his defence – we’ll come to that – Emery also needs a full-back, a central midfielder (which is likely to be Dani Ceballos) and a wide player.

Ryan Fraser seemed well-matched for that vacancy but Arsenal can’t even afford a Bournemouth winger a year from free agency. Emery apparently liked Yacine Brahimi for the role, but even a free agent proved to be out of their reach, with the Algerian said to be bound for Qatar having found a club there willing to cough up the signing-on fee he was demanding. Then there is Wilfried Zaha. The winger would be ideal for Emery but since Crystal Palace aren’t obliged to cut their asking price by at least half then it seems the Ivory Coast star will remain a pipe dream and Arsenal will be forced to look for loans or other cut-price options closer to the deadline.

Emery: “We are waiting on two, three or four players to come in and help us.

“We have big targets. Our first target is a very expensive player, after that the rest will follow.’

7) Manchester United – central midfielder
United’s midfield was slow and stodgy last season and they have lost the one player who injected some spark into their engine room. It may not be the area they most need to strengthen – though some insist it is – but the need for at least one new midfielder is rather dire.

Teenager James Garner will be a positive addition this term to Solskjaer’s squad – the manager reckons he will fill the void left by Michael Carrick – and Fred has to be more use in his second campaign. Garner and Scott McTominay are more likely to push and possibly oust Nemanja Matic from the heart of United’s midfield, leaving Solskjaer still short of a replacement for Ander Herrera. His primary target appears to be Bruno Fernandes, but United’s haggling leaves them at risk of missing out on the Portugal star. If Fernandes remains at Sporting Lisbon, Solskjaer has to find an alternative rather than simply making do.

6) Everton – striker
Marco Silva is most preoccupied right now in trying to get back to square one in terms of centre-backs, with Phil Jagielka having departed and still no clarity over whether he might be able to re-sign Kurt Zouma from Chelsea. As it stands, the four he can call upon are Michael Keane, Yerry Mina, Lewis Gibson and Mason Holgate.

But the Toffees are even shorter up front, as they have been since selling Romelu Lukaku to Manchester United two years ago. No club can consider challenging the Big Six with Dominic Calvert-Lewin, Cenk Tosun or Oumar Niasse as their leading front man. Silva seems to recognise that since two of that trio are very much up for sale. Richarlison helped to cover the shortfall last season and even if Silva decides that the Brazilian is best employed as a centre-forward, he still lacks adequate cover or an alternative. Danny Welbeck seems tailor-made for the Toffees, but it seems Silva would prefer to explore other options.

5) Sheffield United – goalkeeper
Chris Wilder has suggested the Blades will break their transfer record for the fourth time this summer, with a striker – perhaps Neal Maupay or Ollie McBurnie – seemingly the most likely subject of any bid larger than the £10million they paid for Lys Mousset. The Premier League new boys have already made strides in increasing their creativity, with Mousset following Ravel Morrison, Luke Freeman and Callum Robinson through the Bramall Lane entrance.

But Wilder is yet to close the back door, despite signing Phil Jagielka on a free. The last line of his Championship defence is currently back at Manchester United waiting for what seemed to be an inevitable return to South Yorkshire. But Wilder spoke at the weekend of his irritation over the continued delay of a deal which makes sense for all parties. It seems most likely that Dean Henderson will return – where would he get a better offer? – but the Blades cannot afford to be beholden to the 22-year-old’s agent. With only Simon Moore tending his goal during pre-season, Wilder needs to start working through his other options as a precaution.

4) Crystal Palace – striker
“We’ve got enormous problems at the back at the moment,” Roy Hodgson said after watching Barnet put six past his side in a pre-season friendly last week. But those issues should be eased once injuries clear up. The Eagles need a replacement for Aaron Wan-Bissaka, of course, but they need a striker rather more.

Hodgson’s current options at centre-forward: Christian Benteke, Alexander Sorloth, Connor Wickham. Between them, that trio has scored six Premier League goals in the last two seasons. Wilfried Zaha has covered for his strikers’ impotency, especially away from home, but the Palace star wants another challenge and should he be granted one, Hodgson is woefully short of firepower.

“If Michy Batshuayi was going to be available, either on loan or buy him, I would be very happy with that,” said Hodgson at the end of last season but Chelsea’s circumstances mean a decision on the Belgian might not come until shortly before the deadline. Palace need a Plan B if Frank Lampard opts to keep Batshuayi at the Bridge.

3) Newcastle – striker
The Magpies have lost not only last season’s manager but also their two highest scorers, with Salomon Rondon following Rafa Benitez to China and Ayoze Perez receiving an offer he couldn’t refuse from Leicester. Steve Bruce is probably hoping that Miguel Almiron can cover the loss of Perez in his first full season in the Premier League but, at the moment, the new Toon boss is without an adequate replacement for Rondon.

The Newcastle hierarchy appear to believe that Joelinton, the Brazilian 22-year-old currently playing for Hoffenheim, can provide the goals Bruce requires to have a hope in hell of keeping Newcastle in the Premier League. Rather surprisingly, it seems Mike Ashley is ready to sanction a deal which could be worth anything between £36million and £44million depending on which report you believe. That willingness presumably comes from the belief that there is a profit to made further down the line, while his versatility across the front line means Bruce could still do with another centre-forward, with Andy Carroll and Danny Welbeck both linked with Newcastle in recent days.

Well that’s me hooked. Joelinton is the best thing since sliced bread. pic.twitter.com/sY8PLqaNa1

2) Manchester United – centre-back
United haven’t stop needing a central defender since Nemanja Vidic and Rio Ferdinand left the club in 2014. Jose Mourinho tried to tell Ed Woodward – despite having already signed one during each of the previous summers – but the vice-chairman wasn’t having it. Now, Woodward cannot afford to scrimp. Victor Lindelof has the makings of a United centre-back and Chris Smalling is far from the joker he’s made out to be, but Ole Gunnar Solskjaer cannot trust any of his other options. Phil Jones cannot be relied upon to stay fit, while Solskjaer can do little to guard against Marcos Rojo and Eric Bailly’s frequent brain farts aside from use them as infrequently as possible.

Just pay the money for Harry Maguire and move on to sorting the midfield.

1) Arsenal – centre-back
As we have already discussed, Emery needs many things this summer but the Gunners required a centre-back long before Laurent Koscielny threw a wobbly. The captain’s recent stance only intensifies the demand for a top-class central defender this summer, and while Saliba may turn out to be just that in a few years, he can’t bail out Arsenal from St Etienne over the next campaign.

Given the other strains on his budget, Emery may be tempted to gamble on Shkodran Mustafi and Sokratis again with Rob Holding back in contention. Calum Chambers is back from Fulham too but, as we have seen before, that is not a central defensive quartet anything like strong enough to get Arsenal back among the top four. That combined with Arsenal’s lack of resources is a problem which requires a creative solution.