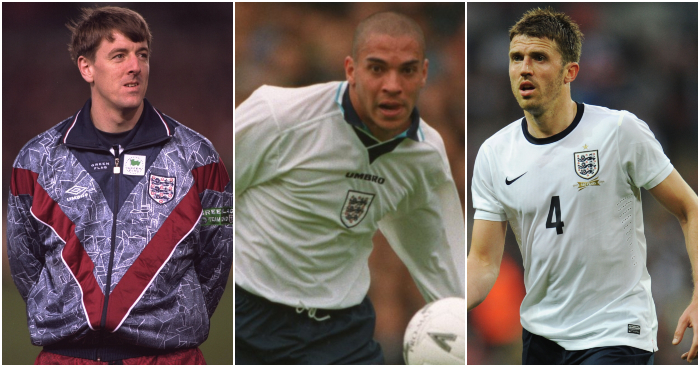 10) Tim Flowers: 11 caps (Rob Green has 12)
England were lucky to have David Seaman’s shovel hands guarding their goal for much of the 1990s but Terry Venables, Glenn Hoddle and Kevin Keegan were always fortunate that if the Arsenal keeper was ever missing, they could rely on top-quality back-up.

Nigel Martyn was one of those options and he won 23 caps. Flowers was another. The Blackburn keeper won the title after joining Rovers as the most expensive keeper in Britain in 1993, making Jack Walker’s investment of £2.4million appear an absolute steal. But at international level, Flowers could never shift Seaman. He played 11 games – all of them friendlies between 1993 and 1998 – while watching Euro 96 and the World Cup in 1998 from the bench.

9) Danny Murphy: 9 caps (Jermaine Jenas has 21)
All of the midfielder’s caps came in a two-year period while he was at Liverpool, either side of a World Cup finals he had to miss due to a metatarsal injury. Of those nine caps, only one came from the start.

Murphy was one of many central midfielders who had their route to the XI blocked by Gerrard and Lampard. And some of his best form was reserved for his final season at Fulham when he created more goalscoring chances than any other Premier League player. By that time, many considered Murphy’s time to have passed, but surely he was worth more than just one start?

8) Nigel Winterburn: 2 caps (Tony Dorigo has 15)
Almost four years passed between the Arsenal left-back’s two appearances, both of which came from the bench. His debut was as a substitute for Stuart Pearce, which gave Winterburn a taste of what was to come. If the Gunners’ stalwart wanted a regular England berth, he would have to get past Psycho.

Winterburn was by no means as imposing as Pearce but he was equally consistent and reliable, which is evidenced by his presence in George Graham and Arsene Wenger’s watertight defence through the late 1980s and the entire 1990s. At least he could share his international frustration with the fella just inside him – Steve Bould also earned just two caps, while Tony Adams and Lee Dixon helped themselves to nearly 100 between them.

7) Kevin Phillips: 8 caps (Emile Heskey has 62)
Super Kev was given four starts and four substitute appearances after making his debut in the same game as Heskey and he also went to Euro 2000 with Keegan’s England. Considering his goalscoring exploits during the season that preceded the tournament you would understand if the then-Sunderland striker was a bit miffed not to see any action in Holland and Belgium.

Phillips not only went into Euro 2000 as the Premier League’s highest scorer; no one else in Europe could match his tally of 30 league goals. as he told our friends at Planet Football: “If an English player scored 30 goals now, they’d get themselves a massive move and be on God-knows what. They’d be all over the world.”

6) Andy Cole: 15 caps (Darius Vassell has 22)
The former Manchester United striker’s first four England caps each came under different managers but his international career is best remembered for Glenn Hoddle’s damning judgement. The England boss between 1996 and 1999 – while Cole was busy winning Doubles and Trebles with Manchester United – reckoned the striker “needs four or five chances to score a goal”.

So Hoddle rarely bothered with Cole, picking him only once at Le Tournoi in 1997. But others apparently shared Hoddle’s concern over Cole because it wasn’t until 2000 that the centre-forward was ever trusted to lead the line on consecutive occasions. By that time, Hoddle’s opinion had stuck and watching Cole toil in an England shirt became an increasingly uncomfortable experience until he finally netted his only international goal at the 13th attempt in 2001, the same year his United career ended.

Cole was unlucky to peak in a period when England had a wealth of centre-forward options: Alan Shearer, Les Ferdinand and his mate Teddy Sheringham to name three. Despite his goalscoring exploits for United and Newcastle, the ‘one in five’ label hung like a millstone around his neck whenever he was considered for England.

5) Steve Bruce: 0 caps (Martin Keown has 43)
Bruce was Manchester United captain during the early and mid-1990s, a period during which the goalscoring central-defensive rock played a vital role in helping United win Premier League titles, Doubles and European trophies. But he wasn’t worthy of a single England cap.

Graham Taylor was in charge when Bruce was really in his prime but the defender knew Taylor didn’t rate him. In 1987, Sir Bobby Robson instructed Taylor to give Bruce the captaincy for an England B international against Malta, but Taylor did so reluctantly. Bruce recalled: “Graham said, ‘you’re captain by the way, but it’s not my choice, it’s Bobby’s. For me you’d never be captain.'”

When Taylor got the gig in 1990, Bruce never got the call. Terry Venables picked up the phone in late 1994, but Bruce didn’t want a token cap. “He rang me and said, ‘I want to give you a cap’,” Bruce told the Daily Express. “I declined. My best mate, Bryan Robson, was Terry Venables’ assistant and he was desperate for me to get a cap. I turned it down. I was close to 35 and I said, ‘I’m sorry I would rather not have had an international career than just a sympathy cap.'”

4) Stan Collymore: 3 caps (Rickie Lambert has 11)
1995 was a big year for Stanley Victor. The 24-year-old became British football’s most expensive player when he moved to Liverpool for £8.5million in the same month he made two of his three England appearances. His debut came against Japan in the Umbro Cup at Wembley before he was handed a start against Brazil.  His obvious talent suggested that should have been the start of a long international career. His complicated mind dictated that it would never get better than that.

His first season at Liverpool was a success but then it all started to unravel. Collymore earned one more cap as a substitute in 1997 shortly after joining boyhood club Aston Villa. From there, it was a fast descent towards retirement at 30.

Still, Collymore looks back on his brief England career as an achievement rather than with any tinge of regret: “I wanted to play for England. Again, I didn’t get 50 caps, but I got three and one was against Brazil.”

3) Ledley King: 21 caps (Matthew Upson has 21)
England didn’t suffer too greatly from King’s injury woes, but only because of the pool of other top quality centre-backs available at the time. The former Spurs skipper only twice managed more than two England appearances in any of the nine years of his international career.

Luckily for Sven, Steve McClaren and Fabio Capello, John Terry, Rio Ferdinand and Sol Campbell weren’t let down by their bodies in the same way as King. It would have been fascinating to see what impact he would have had on his team-mates and rivals for the England shirt if they felt he was breathing down their neck and not likely to break down at any minute.

King could just as easily have slotted into midfield in a holding role, such was his versatility, physical prowess and class on the ball. The fact he was only able to earn 21 caps over nine years was a huge shame, but his absence was far more keenly felt at club level than on the international stage.

2) Michael Carrick: 34 caps (Jordan Henderson has 71)
Carrick divides opinion but you can’t ignore how highly he is rated by those who should know. “He’s one of the best holding midfielders I’ve ever seen in my life, by far,” said Pep Guardiola. “He’s the level of Xabi Alonso, Sergio Busquets in Barcelona and Bayern Munich.”

That being true, it’s a travesty that he managed only 22 England starts, and only one of those came at a major finals. Carrick is not the only player to have suffered for England’s persistent attempts to make Steven Gerrard and Frank Lampard function together, but he is one of the few holding midfielders who could have changed the way England play had he been given regular opportunities. If, as Arsene Wenger says, Carrick could have played for Barcelona, then he damn sure could have done more for England.

Of course, Carrick might have had more caps if he had not asked the FA not to consider him for selection after becoming thoroughly disillusioned to the point of depression after weeks away with the Three Lions.  But the former Manchester United midfielder remains one of the great wasted talents this country has produced.

1) Matt Le Tissier: 8 caps (Carlton Palmer has 18)
‘Le God’ scored 209 goals in 540 appearances in 15 years at Southampton. The attacking midfielder scored 20-plus top-flight goals in three different seasons with the Saints, sustaining a goal ratio of one in every 2.75 games over a decade and a half. Impressive quantity and the quality of many were just bloody ridiculous. But one of the finest natural talents the Premier League has ever seen managed a pathetic three starts for the Three Lions.

England has rarely handled talents like Le Tiss. Paul Gascoigne was an enigma and Paul Scholes was wasted on the wing. None of  Taylor,  Venables or Hoddle embraced Le Tissier’s potential. Some pointed at the Saint’s reluctance to chase and tackle but his former club manger Alan Ball summed it up best: “Whether you like it or not he is the best player at this club by a million miles. His goals will keep us up. For him to do that he can’t run and tackle because he’s useless at that. Get the ball to him.”

There were plenty of other players who could have done Le Tissier’s dirty work. Many midfielders with more England caps made a career out of that job. But no one even tried to build a team around Le Tissier in 1990s. His was an alien style of play and it is only in recent years that England have sussed out that a creative and inventive No.10 is exactly the type of player we need to be producing more. Just two decades too late for Le Tissier.