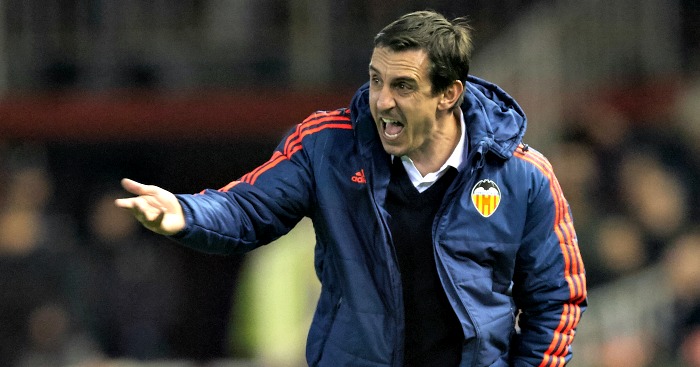 10. David Moyes – Real Sociedad
For a man whose ascent to one of the greatest managerial opportunities in world football took 15 years, David Moyes’ fall down that very same mountain was pronounced, dramatic and really quite funny.

Many felt that Moyes would still be able to bounce back from his failure at Manchester United. The Scot’s reputation had been damaged by his spell at Old Trafford, but not irreparably. Such is the power of being a British manager with Premier League experience.

Few expected Moyes to travel quite so far to escape his demons. He was sacked by United on April 22, 2014, and was appointed as Jagoba Arrasate’s replacement at Real Sociedad the following November.

The highlights of his spell in Spain include beating Barcelona 1-0 and sharing a packet of crisps with a fan after being sent to the stands during a game. He lasted just ten months at Old Trafford, and still could not even make it a year in the Basque Country; Moyes was removed after 364 days.

9. Edgar Davids – Barnet
It was in October 2012 when Edgar Davids completed the final leg of his ‘From Barcelona to Barnet’ world career tour. The Champions League winner spoke of his delight at joining “his local club” as player-manager, with the Bees mired in a League Two relegation battle.

Davids was appointed to work alongside Mark Robson, but the current Aston Villa first-team coach was removed from his position by December, leaving Davids to fend for himself in his first and, to date, only professional managerial spell.

The Dutchman almost guided Barnet to safety, being named Man of the Match in his first game, and leading the Bees out of the bottom two heading into the final game of the season. A defeat to Northampton on the last day sealed their fate on goal difference. Barnet’s 51 points that campaign remains the highest for a side relegated from the fourth tier.

The unlucky narrative did not last into Davids’ second season. He was booked in each of his first eight games in the Conference, being sent off in three; he gave himself the No. 1 shirt; he resigned by January 2014, with Barnet sitting 10th. As he stated on live TV just one month into his tenure: “I’m f**king Edgar Davids.”

Edgar David's justifying bringing himself on when he was managing Barnet.

8. Alan Irvine – West Brom
If one is ever tasked with the rather strange and unenviable duty of describing the most effective way to use Alan Irvine in a footballing capacity, his current post is a good place to start. It was only on Saturday when Norwich thrashed Championship play-off hopefuls Reading 7-1 with the Scot in caretaker charge.

Irvine is the perfect right-hand man, an individual who will keep his head down and work hard behind the scenes. He has found success as a youth coach at Blackburn, Newcastle and Everton, and as an assistant manager for Blackburn, Everton and Preston.

So quite why West Brom felt that employing a man whose only previous full-time management spells ended in sackings at Championship Preston and League One Sheffield Wednesday was ever the answer is beyond even the most unhinged chairman. He was appointed in June 2014, and sacked by December.

7. Joe Kinnear – Newcastle
Newcastle employed a series of managers in an attempt to avoid Premier League relegation in the 2008/09 season. They started the campaign with Kevin Keegan in charge, before turning to Joe Kinnear and then Alan Shearer, with Chris Hughton handed intermittent interim influence.

Considering Kinnear was their longest-serving manager that campaign at a staggering five months, it is perhaps little wonder Newcastle tripped over their own shoelaces and headfirst into the Championship. It was his first job in four years, and he had never proved capable of replicating the pre-21st century magic he oversaw at Wimbledon.

A friend, discussing Trump: "He insults the media, mispronounces everything, and has no clue what he's doing. He's basically Joe Kinnear."

The 70-year-old won just four of his 19 games in charge before having to step down in February 2009 due to health problems. His departure was greeted with an outpouring of grief, particularly from that c*** Simon Bird of the Daily Mirror.

6. Frank Rijkaard – Barcelona
In the glorious glare of hindsight, there is little weird or bizarre about Barcelona’s appointment of Frank Rijkaard as manager. The Dutchman left in 2008 after delivering two La Liga titles and the club’s first Champions League crown in 14 years. On the sliding scale he was no Pep Guardiola, but nor was he a Louis van Gaal Mk II.

But Rijkaard’s ascension to the Nou Camp throne was not a natural one. Before his coronation – unpopular with most fans – in 2003, his only previous role in club management came at Sparta Rotterdam. He was the first man to relegate the Netherlands’ oldest professional club in 2002.

Within a year of his sacking that summer, Barcelona came calling, and Rijkaard played a key role in the club’s return to prominence after early struggles. He oversaw Lionel Messi’s breakthrough, and guided the club to domestic and European glory. He was also ridiculed by then-Liverpool manager Roy Hodgson for being sacked by Galatasaray in 2010.

Luxemburgo made his name in his native Brazil, but also spent time in Saudi Arabia and China. His only ever venture into Europe came with the continent’s most famous club, and would last just under a year.

In the realm of Real Madrid managers, the Brazilian falls between Mariano García Remón and Juan Ramón López Caro. He is remembered just as fondly as the Spanish pair who sound suspiciously fake. And neither of those two were treated to a raucous Bernabeu chanting “out, out, out” after they substituted Ronaldo for Thomas Gravesen.

4. Danny Blind – Netherlands
A decade separated Danny Blind’s two spells in management thus far; his wait for another opportunity might last even longer.

Blind led Ajax to fourth place and 24 points behind eventual 2005/06 Eredivisie winners PSV in his sole full season in charge. It was that performance which persuaded the Dutch FA that he could direct a difficult period of transition when they appointed him in late 2015. All Blind did was oversee one of the darkest spells in the national team’s history; his 20-month tenure was very much a story of Oranje becoming the new black. He failed to deliver Euro 2016 qualification, and with their place at the 2018 World Cup in jeopardy, Netherlands have slipped to an all-time low of 32nd in the FIFA rankings.

3. Gary Neville – Valencia
It would be interesting to see Gary Neville return to football management, but one would forgive the 42-year-old for his reluctance.

Neville spoke of his “commitment to so many different things” when explaining in September 2016 why his current hiatus from coaching would last at least five years. But it is difficult not to imagine his reign in Spain is not still playing on his mind.

To give up the comfort of the Sky Sports studio for the constant pressure cooker of management was always a risk, particularly with said pressure cooker being produced by one of the leading clubs in a foreign country. Valencia’s star might have already been falling by the time Neville was handed the keys by friend Peter Lim, but he did little to stall the inevitable.

Neville would last just four months, later citing problems with the language, a “difficult dressing room” and plain old bad luck for his downfall. It will either be the footnote of an otherwise excellent footballing and punditry career, or the inauspicious start to his life as a coach. But it was certainly bloody weird.

2. David Hockaday – Leeds
Back in summer 2014, Leeds were in need of a new manager. Brian McDermott had become Massimo Cellino’s first victim of many at Elland Road, and it was time to appoint his successor.

The early favourite was Gianluca Festa, who had almost replaced McDermott months earlier. Malky Mackay and Chris Hughton were also mooted, as was Claudio Ranieri.

The odd one out was Dave Hockaday, who had disappointed in his only previous managerial spell with non-league Forest Green Rovers. But it came to pass that the uninspiring former Cirencester Town right-back would follow in the footsteps of Revie, Bremner and Wilkinson at Elland Road.

Cellino predictably ended the experiment after 70 days, and Hockaday is now the current Head of Male Football at South Gloucestershire and Stroud College. Good for him.

1. Claude Anelka – Raith Rovers
Claude Anelka was full of grandiose promises. In one of his first interviews after becoming manager of Raith Rovers, he spoke of his style, which was “a mixture of Barcelona and Arsenal”. Johan Cruyff and Arsene Wenger, he said, were his coaching idols.

He wanted then-First Division Raith to become “the third force” in Scottish football. The elder brother of Nicolas was never a popular appointment, nor was he really an intended one. In 2004 he offered an investment of £200,000 to any club willing to give him a chance as a Director of Football. Raith took the bait.

Player-manager Antonio Calderon would barely last a few weeks, leaving of his own volition just one season after guiding the club to promotion in 2002. With no obvious replacement, Claude, whose previous experience included time as his brother’s agent and a few spells as a DJ, would take his place.

Anelka signed 14 players, the majority of which came from his native France. A number of them would later attest to never having played 11-a-side football; they had joined from one of the seven-a-side league teams in Paris.

The club’s chairman at the time, the wonderfully named Turnbull Hutton, has since declared the fiasco to be “a big mess” that “set the club back four years”, which takes some doing. Anelka drew one game and lost nine – including two cup defeats to lower-league sides – before resigning in September. But for a month or so, he was the most famous Anelka. And that must have made a nice change.