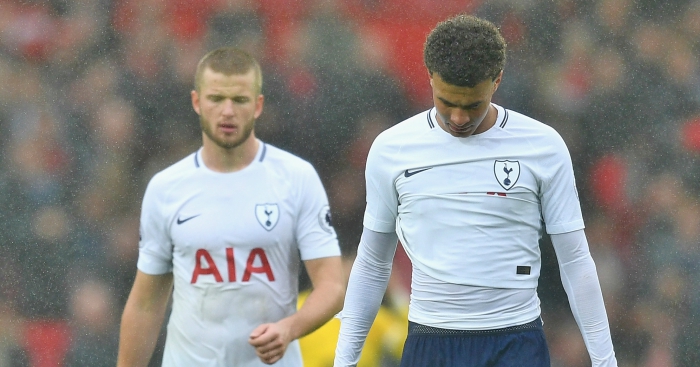 The flip-reverse of last week’s ‘Top ten Premier League players outside the top six‘. But to stop this just being a list ending in ‘1) Theo Walcott’, players must have started at least seven Premier League games to feature.

I’ll meet you in the comments, yeah?

10) David Luiz
After a season which did much to restore and augment a reputation damaged by FSF award winner Gary Neville, Germany and the sort of hairstyle which leaves Garth Crooks foaming at the mouth, David Luiz’s stock had rarely ever been higher. The Brazilian spoke of relishing the “responsibility” of the captain’s armband in the summer. Gary Cahill eventually had the honour of succeeding John Terry bestowed upon him, but Luiz was a bona fide candidate.

This campaign has not been a return to the ‘PlayStation’ defender of old, but much of that is down to the fact that Luiz is simply not playing. Since apparently falling out with Antonio Conte after the 3-0 defeat to Roma, Luiz has featured once in six matches, the excuse for which has been a mysterious injury. That Chelsea have won five times and drawn once in his absence is hardly a resounding argument for his eventual return.

9) Moussa Sissoko
“This season is totally different,” insisted Moussa Sissoko in September, and the Frenchman was absolutely right: he has one goal in 14 Premier League games this campaign, compared to none in 25 in his debut year in north London. This is the sort of goalscoring form Tottenham paid £30million for.

The 28-year-old has undeniably improved following his difficult 12-month learning curve at White Hart Lane. He has already matched his number of starts in all competitions last season (12), and has twice been part of a makeshift midfield that helped humble Real Madrid in the Bernabeu and at Wembley. But of his eight Premier League starts, Tottenham have won only four. If the planets ever align and Tottenham manage to boast a fully fit squad, it is difficult to see where Sissoko fits.

8) Ragnar Klavan
As a manager who has coached Mats Hummels, Neven Subotic, Kolo Toure, Mamadou Sakho and Steven Caulker, Jurgen Klopp ought to know something about centre-halves. Yet 16 years into his career, the third-highest transfer fee he has ever paid for one remains the £4.2m required to purchase Ragnar Klavan in summer 2016. Were it not for Sokratis Papastathopoulos and Matthias Ginter, Estonia’s most expensive footballer ever would finish even higher than bronze on that particular podium.

In the 32-year-old’s defence, he was never supposed to be relied upon so heavily this season. Klopp starting the season with four centre-halves, and two of those individuals struggling with injuries and form has seen his importance elevated, as did the sale of Lucas Leiva. Klavan played the full 90 minutes of the 2-0 Carabao Cup defeat to Leicester and the 3-3 Champions League draw with Sevilla. And while Liverpool beat Crystal Palace (18th), Huddersfield (16th), West Ham (19th) and Southampton (11th) with their fourth-choice centre-half in the side, they have not beaten a top-half team when Klavan has started.

7) Chris Smalling
Saturday provided the sort of performance that Chris Smalling would have had edited into a neat highlights package and forwarded in a snide and angry email to Gareth Southgate. It was a backs-to-the-wall, hell-for-leather, defend-for-your-lives defensive display from Manchester United, the kind the 28-year-old is eager to point to when subjected to criticism.

Saturday provided the sort of performance that justifies Southgate’s decision to continue to omit Smalling from his England squads. United thwarted Arsenal in spite of their centre-halves, not because of them. There can be no pride in your keeper making a Premier League record 14 saves, nor in just two starting outfielders recording a lower pass accuracy, and certainly not in being one of only two players – Romelu Lukaku the other – to have played every minute of United’s four defeats this season.

6) Eric Dier
A player his international manager describes as his “sounding board”, Eric Dier is suffering from being the round peg that his club manager believes can be forced into any shaped hole. There is little doubt that Tottenham have struggled with the absence of Victor Wanyama, but Dier is struggling to balance the central defensive and central midfield plates that Mauricio Pochettino has handed him.

The problem is that Pochettino’s main strategies all revolve around Dier. It is no coincidence that he (13,179 minutes) and Eriksen (13,427) have played by far the most minutes of any outfielder under the manager since his 2014 appointment.

5) Gary Cahill
If Luiz should be fearing for his Chelsea future, so too should his captain. The emergence of Andreas Christensen and the arrival of Antonio Rudiger has provided Conte more defensive options, and Cesar Azpilicueta’s continued excellence means there are only two places going spare.

For now, Cahill inhabits one of those two spots more often than not. But whereas a Chelsea future without an English centre-half at their core was unthinkable until recently, the 31-year-old is far from untouchable. Each of the Blues’ worst performances of the season have come with Cahill at the heart of their defence; they have won every game he has not started this season by an aggregate score of 18-3.

Incredible to think that Chelsea owned Andreas Christensen during all these years that Gary Cahill has been lumbering around the pitch like a wounded giraffe.

4) Dele Alli
In our list of the top ten English players so far this season, it would have been sacrilegious to omit Dele Alli. The Tottenham forward had scored two goals against Real Madrid the previous week, and should have crowned his most famous game with the most famous of hat-tricks. ‘Alli himself would admit he has not been performing quite to capacity this season,’ I wrote last month. ‘That there is room to improve is all the more impressive.’

With room for improvement comes the opposite: space and time for regression. Alli has not scored in five appearances since sinking Real, and has scored once in his last 11 Premier League games. There is a reason Spanish and English vultures are suffering dizzy spells from circling instead of swooping.

3) Granit Xhaka
Paul Pogba was majestic before his momentary lapse. Aaron Ramsey was excellent, constantly probing and pushing. Nemanja Matic was running on about 70% capacity but still helped keep the Arsenal onslaught at bay. Granit Xhaka was the central midfield younger sibling who his older brother was forced to bring along for a kickabout with his mates.

In a pulsating game between Arsenal and Manchester United, Xhaka looked lost in the madness, unable to control the tempo with his calm, collected passing. There were worse performers for either side, but few cost as much or arrived with such fanfare.

The Swiss midfielder has contributed three assists this season, but has played his part in at least as many goals for the opposition. From his misplaced passes against Leicester and Stoke, to his refusal to track Tom Cleverley’s run against Watford or Jesse Lingard’s against United, to his costly error at Everton, the evidence suggests Xhaka might benefit from competition not comprised of Francis Coquelin. Tom Ince (32) is the only player to have more shots (31) without scoring this season.

2) Juan Mata
“At Man United I have more players to play transitional football. Football is the main objective, we are not so physically strong and compact and playing in a defensive block like we did when we won the title in 2014/15. The football we want to play here is different. We are in the beginning of that process. I think Mata is very adept to do that.”

Those who doubted the sincerity of Jose Mourinho’s message to Juan Mata upon his Manchester United appointment were to be proven wrong within one game. Fate decreed that the player who had been banished by the Portuguese at Chelsea would score the first goal of his Manchester United tenure in a win over Bournemouth last August.

Little over 12 months later, Mata’s fall from grace has been pronounced, but there are no such protestations this time. The Spaniard has played less football than Victor Lindelof this season, and has one Premier League goal since March. Alongside Arsenal, Watford and good dancing, he is another victim of Jesse Lingard.

Another day, another ineffective Juan Mata performance. Still struggle to see what he brings to the table. #MUFC

1) Tiemoue Bakayoko
Hi, yeah, I’d like a deconstructed iced pumpkin latte, a pickled kale and sriracha muffin and a slice of your finest humble pie, please.

Perhaps Ray Wilkins was right all along. Perhaps everything we thought we knew was wrong, and the very fabric of reality itself is tearing apart at the seams. Perhaps Nathaniel Chalobah really is just as good as Tiemoue Bakayoko.

There are caveats to Bakayoko’s crushingly disappointing first few months in England. A long-term knee injury delayed his signing for Chelsea, and also took away his chance of a pre-season. He was visibly struggling for fitness on debut against Tottenham in August, but handled the game well. But he has floundered since, and has started one of Chelsea’s last four games.

At 23, and now afforded a rest thanks to Danny Drinkwater’s own return from injury, Bakayoko might finally have the pieces in place to realise his potential. That does feel like a distant possibility after his first few months at Stamford Bridge.