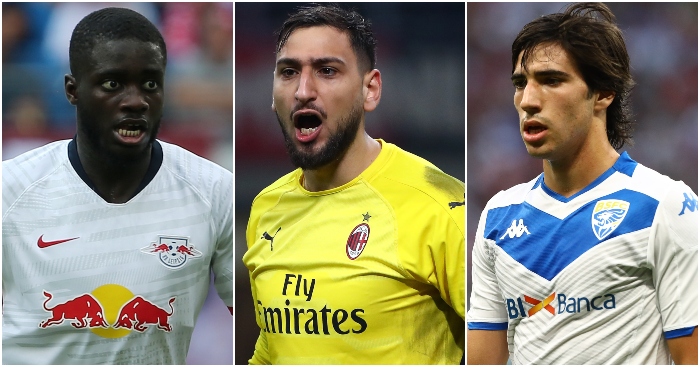 10) Arkadiusz Milik (Napoli)
The Poland striker has scored a goal every 86 minutes for Napoli this season, but the 25-year-old has had to make the most of opportunities rather more limited than he would like. Milik has been an inconsistent presence in Carlo Ancelotti’s XI and speaking about his international prospects after helping Poland qualify last month for Euro 2020, he pointedly said: “I’d like to play a little more and get more than 15 minutes per game, but I won’t say anything else.”

Five goals in four starts since have certainly helped his cause, but he will still have to lower his demands for a new contract beyond 2021. La Repubblica reported that Milik was looking for almost double his current £40,000-a-week wage packet but Napoli were “not even considering” meeting those terms. Somebody will.

9) Jesse Lingard (Manchester United)
The Manchester United attacker scrapes into this list less than a month before he turns 27 but since he fancies himself as a businessman, he should be well aware that his current form does not put him in a strong negotiating position.

Lingard has one assist since January – a simple pass against Rochdale in the Carabao Cup – and not a single goal in the same time frame. His only 90 minutes this season came in the 0-0 draw at Partizan Belgrade and his England place has gone too. It isn’t much to put on the table while he asks for an increase on his current £100,000-a-week salary.

But where else would he go? It is hard to imagine a queue of takers should Lingard put the feelers out over a possible future away from Old Trafford and United would be daft to commit huge sums to a player at peak age who is no longer a first choice. His contract should be the least of his worries; scoring a goal or creating a couple has to be his immediate priority.

Everyone is talking about Ben Foster having more shots on target this year than Jesse Lingard. Saw a stat and it puts this in perspective.

Lingard has had 10 assists in the Premier League in the past six seasons, Adam Johnson has had 11. He’s just got out of jail after 3 years. pic.twitter.com/3DhLfg4Lbp

8) Lukas Klostermann (RB Leipzig)
RB Leipzig have a concern over half of their back four, with Klostermann approaching the end of his contract five years after he signed from Bochum for only £800,000 as an 18-year-old. Like Dayot Upamecano, Arsenal are said to be sniffing around the 23-year-old.

But it seems as though Leipzig have more grounds for optimism over the prospect of the versatile defender extending his terms. Sporting director Markus Krosche said: “We have signalled that we would very much like to keep him here in the future. I’m in cheerful spirits and very positive in this regard.”

Atletico Madrid were also said to be keen on Klostermann before they signed Kieran Trippier but Arsenal remain the club most linked with the Germany international who has made seven starts for Joachim Low in 2019.

7) Carlos Soler (Valencia)
Having renewed his contract three times in 2017 alone, the Valencia star must be due another. Especially since every big club in Europe has been linked with the 22-year-old since he last put pen to paper at the Mestalla.

An injury-hit season is unlikely to have diminished the huge interest in the midfielder who played a leading role in Spain’s European Under-21 Championship triumph last summer. But after amassing more game time than any team-mate at that tournament, Soler has completed 90 minutes in La Liga only once this term owing to an ankle injury and another muscle problem picked up three matches into his return.

That won’t affect Soler’s value but time ticking down on his contract certainly might. Valencia put a £67million buyout clause in his most recent terms but Los Che are unlikely to see that demand being met, even if the likes of Man Utd and Barcelona are continually linked with the academy graduate.

6) Leroy Sane (Manchester City)
Manchester City have certainly tried to pin Sane down to new terms but it is increasingly difficult to ignore the likelihood that the Germany winger has had his head turned. “We have been trying to extend the contract for more than one year,” said Pep Guardiola in August. “We were quite close a month ago and now it’s a little bit different.”

Bayern Munich’s interest seems to be the primary factor in Sane’s U-turn. The 23-year-old was wanted last summer by the Bavarians as they sought to replace Franck Ribery and Arjen Robben. Though they refused to met City’s ‘insane’ demands before the start of this season prior to the player suffering a serious knee injury in the Community Shield, Uli Hoeness has suggested that they could move again in January, depending on the direction Bayern’s revamped hierarchy wish to take. It seems City are fighting a losing battle and the best result they can hope for is a profit on the £37million investment they made when they bought him from Schalke in 2016.

5) Piotr Zielinski (Napoli)
Back in March, it seemed that Napoli and Zielinski were only a signature away from an agreement but still the midfielder is yet to put his scribble on new terms. According to reports in Italy, Napoli were finding the process ‘exhausting’ as they contemplated cashing in on the 25-year-old.

Zielinski has a lot to consider himself. His wife has been left fearful after having her car stolen in Naples, while the Poland international may have had his head turned by praise from Jurgen Klopp. The Liverpool manager has retained a long-standing interest in Zielinski since almost bringing him to Anfield in 2016 and Klopp went out of his way to fluff the player’s ego after Napoli beat the Reds in September.

4) Sandro Tonali (Brescia)
The Brescia midfielder has been catching everyone’s eye this season, much to Massimo Cellino’s satisfaction. The former Leeds owner knows he has a huge pay day and lots of lovely exposure coming his way, even if he insists he has no ambition to sell the teenager for anything less than a world-record fee.

“I have a dream,” Cellino said last month. “If Sandro accepts, I am ready to make a big financial sacrifice to extend his contract. It’s up to him to decide. He can stay here and enjoy his football or go to a big club and risk being left on the bench.”

Those big clubs are starting to queue up, with Juventus said to be jostling for position at the front. Inter Milan, Atletico, Real, Barcelona and Manchester United have also been mentioned among Tonali’s suitors.

Despite being likened to Andrea Pirlo, the 19-year-old reckons he has more in common with another former Italy midfielder: “I consider myself to be like Gattuso but more technical. He’s always been my role model.”

Is Sandro Tonali the heir apparent of Andrea Pirlo?

3) Memphis Depay (Lyon)
“Each time there’s only a year left on a contract, the conversation over a renewal becomes rather difficult,” Lyon chief Juninho said recently over Depay’s future. Not that Lyon are in a great hurry: “For the moment, nothing is being done concerning Memphis. We’ll start discussing a contract extension by the end of the year.”

On the face of it, it seems unlikely Depay will recommit to Lyon. Moving to Ligue Un always seemed like a step back to take another forward when the opportunity arose and next summer seems certain to be that time. Jean-Michel Aulas won’t let one of his two prized assets leave for nothing in 2021 so either Depay or Moussa Dembele look set to offer Lyon their latest windfall. With Depay only 18 months from walking away for nothing, it seems likely that it will be the Dutchman to go first.

Where will he go? Depay will have eyes on the likes of Real Madrid, but Manchester United reportedly have first refusal. Will they want to re-sign Wayne Rooney’s favourite cowboy?

2) Gianluigi Donnarumma (AC Milan)
It’s been a little quiet around the Italy goalkeeper of late so you can expect Mino Raiola to crank up the volume any time now. Especially if reports last week are to be believed.

Donnarumma and Raiola caused an almighty fuss with AC Milan over their last renewal before it was eventually signed in 2017 when the then-18-year-old became one of the highest-paid players in Serie A. Still, Raiola wants more but reports suggest Milan aren’t willing to go any higher. Apparently, they want to spread his current salary over a longer term which is effectively a pay cut. Imagine how that will go down with Raiola…

Other reports suggest Donnarumma is looking for guarantees from Milan of once again being competitive in all the major competitions, including the Champions League. At what point to Milan decide they’ve had enough of being held to ransom by a 20-year-old and his pain-in-the-arse agent? There will be no shortage of big hitters looking for a new keeper next summer, when it may be time for the Rossoneri to cut and run.

1) Dayot Upamecano (RB Leipzig)
The France Under-21 defender has been linked with Arsenal since his breakthrough as a teenager and since the Gunners still haven’t solved their defensive problems, those whispers aren’t going away.

Especially since Bild claimed that there is a ‘zero per cent’ chance that the 21-year-old will extend his contract with Leipzig. The Bundesliga club felt comfortable turning down big offers given the Frenchman’s huge buy-out clause but that won’t mean anything should he run down his current deal.

That buy-out clause falls to £52million next summer but no club in their right mind would cough up that figure a year away from free agency. If Leipzig intend on making any money out of Upamenano, they may have to lower their sights to between £35million and £40million, which is a figure Arsenal might be happier paying. The trouble is, so would a lot of other clubs.

The fastest centre-back in the #Bundesliga 🏃‍♂️💨