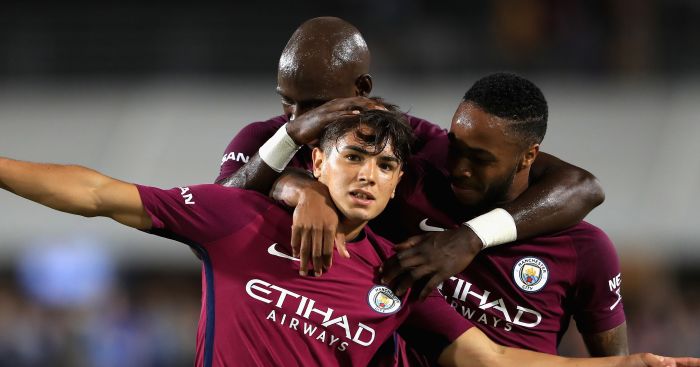 Each player must have fewer than 15 league appearances in the Premier League or Championship. I know Mohamed Salah has had a decent pre-season, but these are potential breakthrough stars, folks.

10. Lys Mousset (Bournemouth)
A man who existed only as a Bournemouth option for numerous Football365 features – read here, here, here and here – Lys Mousset had something of a difficult first season in the Premier League after joining last summer. Eddie Howe was sufficiently impressed with the striker to spend £5.4m to sign him from Le Havre, but the 21-year-old managed just three league starts, coming in the final three games of the season.

Mousset’s goals in pre-season may only have come against Portsmouth and Yeovil, but Howe has taken note. “The biggest difference between this season and last season is his fitness levels,” said the manager last month. Perhaps this summer has given the striker a new Lys of life.

His reward was a chance to step up for his parent club. David Gold’s stark admission in May would be enough to discourage any young talent at the London Stadium, but Cullen took the opportunity with both hands and both feet. The 21-year-old earned rave reviews for his commanding performance against Fulham in particular. But then co-owner Gold’s warning came to fruition; the midfielder will spend this season on loan at Bolton.

8. Brahim Diaz (Manchester City)
Little can be truly learned from a pre-season in which only one player scored more goals than John Stones for Manchester City, but the emergence of Brahim Diaz has been enjoyable nonetheless.

Last month, the Daily Telegraph claimed that City view three of their current crop of youngsters as ‘future first team regulars’: Phil Foden, wantaway Jadon Sancho and Diaz. Such is Guardiola’s fondness for his 18-year-old compatriot, the manager tried to sign him when he was in charge of Barcelona. Diaz was just ten at the time.

A wonderful goal against Real Madrid last month did little to dampen the hype around the midfielder, who followed that strike with an effort against Tottenham.

Brahim Díaz (17) did this, against Real Madrid, overnight.

We told you to watch him…

All that’s left now is for Diaz to find a place in the queue behind Kevin de Bruyne, Leroy Sane, Raheem Sterling, Bernardo Silva, David Silva, Gabriel Jesus, and probably even Patrick Roberts. But hey, he’s ahead of Samir Nasri in the pecking order. Although I think I am too.

7. Tashan Oakley-Boothe (Tottenham)
Of the 26 players Tottenham named in their squad for the tour of the United States, half were aged 23 or under. Harry Kane, Dele Alli, Harry Winks, Josh Onomah and Kyle Walker-Peters are varying degrees of established names in the first-team order.

Jaden Brown, Jon Dinzeyi and Anthony Georgiou, on the other hand, are not. But it was Tashan Oakley-Boothe who made the biggest impact over the pond. He was handed 45 minutes against Paris Saint-Germain, 21 against Roma, and 19 against Manchester City. His summer might have ended with a solitary minute as Spurs ran down the clock in the win over Juventus, but that should not blunt his confidence.

The midfielder remains some way from the first team, but he is now on Mauricio Pochettino’s radar.

6. Andreas Pereira (Manchester United)
It feels as though Andreas Pereira has encountered the same crossroads in each of the past three seasons. Back in November 2015, the midfielder hoped that Louis van Gaal would give him a chance in the Manchester United first team. This time last year, Jose Mourinho declared that the Brazilian had “lots of talent”, but he was subsequently loaned out to Granada for the season.

Pereira will be hoping this is third time lucky. “I’ve had a good pre-season; I’ve showed that I’ve learned during my time away on loan and I also have more to show,” he said at the beginning of the month, having featured in each of United’s seven games this summer. Whether Mourinho believes he has “more to show” at Old Trafford right now is yet to be determined.

The manager has reportedly shelved plans to loan out Pereira, and while he looks ripe for at least one more temporary spell elsewhere, it will be interesting to see whether he has played his way into the Portuguese’s plans.

5. Dominic Solanke (Liverpool)
Jurgen Klopp might have wished for Dominic Solanke to delay his wonderful start to life at Liverpool somewhat. The striker joined from Chelsea last summer, with his compensation fee yet to be decided by tribunal. Professional displays in leading the line for England Under-20s, followed by a breakthrough pre-season, will surely have increased his valuation.

But every cloud has a silver lining, and Solanke’s form has provided Klopp with a dilemma. The manager described his new charge as “a long-term project” last month, but the 19-year-old has clearly been doing his own homework.

Twelve different players have scored for the Reds in pre-season; Mohamed Salah (4) is the only player with more strikes than Solanke (3).

4. Kieran Dowell (Everton)
For every manager, there are two ways of helping develop a young talent: Home-schooling, or boarding school.

Jurgen Klopp and Mauricio Pochettino famously subscribe to the benefits of the former. Both prefer to keep younger players at their own clubs, moulding them to their preferred style instead of allowing another manager contaminate their footballing minds.

Others tend to send players out on loan during their early stages, allowing them to take in another culture and new surroundings. Chelsea and Manchester City are famous proponents of this method.

That Ronald Koeman has chosen to loan out Kieran Dowell despite keeping the younger Tom Davies and handing him numerous first-team opportunities is no setback. Dowell impressed for Everton’s Premier League 2 side while Davies established himself with the senior last season, but they are simply at differing stages of their development.

? | @kierandowell1 with his second goal of the summer. Another brilliant strike. ? pic.twitter.com/4r1dxrwrLI

Dowell’s reward for two wonderful goals in a successful pre-season is a loan spell at Nottingham Forest. On his debut, a second-half substitute cameo, he showed himself to be one of the better players against Millwall. A season in the Championship will surely benefit the 18-year-old, as there is no reason to throw in the Dowell just yet at Goodison Park.

3. Phil Foden (Manchester City)
When you are already at the centre of a war of words between Pep Guardiola and Gary Neville before having made your professional debut, you know things are going well.

Neville claimed that Phil Foden was at “the wrong Manchester club for getting a sustained opportunity” in July, having been impressed with the youngster’s transition into the first team. “I thought even the journalists in the summer time were on holidays but I realise he is not,” was the withering response from the Manchester City manager.

Guardiola had been left almost speechless by the midfielder’s display in the defeat to United. “I don’t have words,” he said. “You are the lucky guys who saw the first game, for the first team for Manchester City, of this guy. It’s a long time since I saw something like this. His performance was on another level.”

The Spaniard would go on to say that Foden could even train with the first team throughout the upcoming season, such was his impact this summer. But it will be a difficult task for the midfielder to establish himself at the Etihad Stadium after a world-record transfer spend.

2. Reiss Nelson (Arsenal)
Of the two players Arsene Wenger reserved particular pre-season praise for, Reiss Nelson was by far the most unexpected. Sead Kolasinac was a free transfer, but arrived with top-flight pedigree, and experience on both the international scene and in European competition. Nelson is yet to even warrant his own Wikipedia page.

Chuba Akpom, Carlos Vela, Yaya Sanogo and countless other players have impressed for Arsenal in previous pre-seasons, but there is reason to believe that Nelson could break the trend of promise followed by predicament. Before this summer, the 17-year-old had never been close to the first team, but he has taken the opportunity in his considerable stride.

An attacking player by trade – Wenger described him as “a more offensive player, more a guy who can play as one of the three strikers or as an offensive midfielder” in July – Nelson has been used as a wing-back for the club’s tour of Australia and China, and then at the Emirates Cup. With the manager already trying to encourage him to learn his defensive responsibilities, it might not be long before his presence in the first-team squad becomes more absolute.

1. Trent Alexander-Arnold (Liverpool)
When Jurgen Klopp remarked this summer that Trent Alexander-Arnold “defends like a kid and attacks like a man”, they were intended as words of gentle encouragement, rather than scathing critique. The Liverpool manager is an undoubted supporter of the 18-year-old, but knows that the club “have only half of this amazing talent” at this stage of his development.

Alexander-Arnold, to his credit, has taken the advice on board. In the absence of an injured Nathaniel Clyne, he has featured heavily this summer, establishing himself as a prime candidate for the right-back position. His most difficult task was thwarting the talents of Franck Ribery against Bayern Munich; that the Reds won that game 3-0 speaks volumes.

Klopp named three candidates to replace Clyne on the opening day against Watford on Saturday. Joe Gomez and Jon Flanagan are solid, reliable players, but Alexander-Arnold has proved himself by far the best available option. His full debut in his breakthrough season last campaign came in a 1-1 draw against Manchester United in January; this summer has been much more important in helping him flourish.