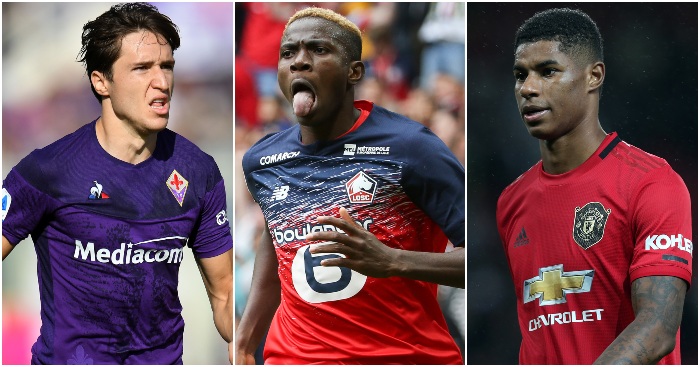 For the purposes of this list, we are only including goals scored or created for clubs listed in UEFA’s top ten nations. All players are 21 or under…

10) Martin Odegaard (Real Sociedad)
Games: 7
Goals: 2
Assists: 2
158 mins per goal/assist
The Real Madrid starlet has started his two year-loan at Real Sociedad so well that Real are already said to be considering bringing him back a year early. That could be just so they can sell to Wolves.

9) Samuel Chukwueze (Villarreal)
Games: 6
Goals: 2
Assists: 2
96 mins per goal/assist
The 21-year-old Nigeria winger has been in and out of the Villarreal XI at the start of the season, though a goal and assist in a 33-minute cameo off the bench last weekend should see him get another start at Osasuna on Saturday. “He’s magical with the ball at his feet,” says Santi Cazorla.

8) Christian Kouame (Genoa)
Games: 6
Goals: 3
Assists: 1
135 mins per goal/assist
The Ivory Coast centre-forward started the Serie A season on fire with three goals and an assist in his first four games. When Kouame has drawn a blank in the last two matches, so have Genoa.

6) Anderson Silva (Famalicao)
Games: 6
Goals: 4
Assists: 0
29 mins per goal/assist
What has the 21-year-old got to do to get a start?! All the Brazilian’s appearances so far this season have come off the bench for the newly-promoted Portuguese side who have begun life in the top flight by winning six of their seven matches while drawing the other.

And the Famalicão fairytale continues.
The recently promoted team made it 19 pts from 7 games with a 3-1 win over Belenenses.
The 21-year old, who hasn’t started this season, came on with the team trailing and scored goals No. 3 & 4 of 19/20. pic.twitter.com/cTTPuHZw2I

5) Federico Chiesa (Fiorentina)
Games: 6
Goals: 1
Assists: 4
104 mins per goal/assist
All the right winger’s goal contributions have come in the last three matches, in which time he seems to have put behind him a difficult summer when he was agitating for a move away. “I wouldn’t even sell Federico Chiesa for €100 million,” new Viola owner Rocco Commisso said. That pledge will surely be put to the test next year.

4) Marcus Rashford (Manchester United)
Games: 7
Goals: 3
Assists: 2
119.2 mins per goal/assist
Something is not right with Rashford who is desperately struggling for either form or fitness – possibly both. But still the United attacker remains one of the hottest young properties in Europe.

3) Tammy Abraham (Chelsea)
Games: 7
Goals: 7
Assists: 0
70 mins per goal/assist
Lampard insists Abraham would have been given his opportunity to lead Chelsea’s line even if the club had been allowed to recruit a centre-forward in the summer. Make of that what you will, but it cannot be denied that one of our players of the season so far is seizing his opportunity.

2) Jadon Sancho (Borussia Dortmund)
Games: 6
Goals: 3
Assists: 5
64 mins per goal/assist
The ‘dream’ signing for Ole Gunnar Solskjaer started this season in a similar vein to last with five assists and two goals in Dortmund’s opening four matches. Solskjaer will have to get in the queue and Dortmund know they can’t keep Sancho for much longer.

1) Victor Osimhen (Lille)
Games: 8
Goals: 6
Assists: 2
87 mins per goal/assist
Lille’s replacement for Nicolas Pepe is faring rather better so far this season than Arsenal’s £72million record signing. Osimhen, 20, joined the French side from Charleroi for around £10million plus another £2million in add-ons and looks a good bet to be one of Lille’s next big-money sales. Chelsea need to beware tonight.

Victor Osimhen: "I watched the Champions League. I remember of a Chelsea-Man United final. I wasn’t really for anyone in particular, but when Terry missed his penalty… I was so annoyed I ran out of the bar. A lady was opening the door. Smash! I took it straight to the face."