Home F365 Says Nobody expects perfection, but Spurs are better than that 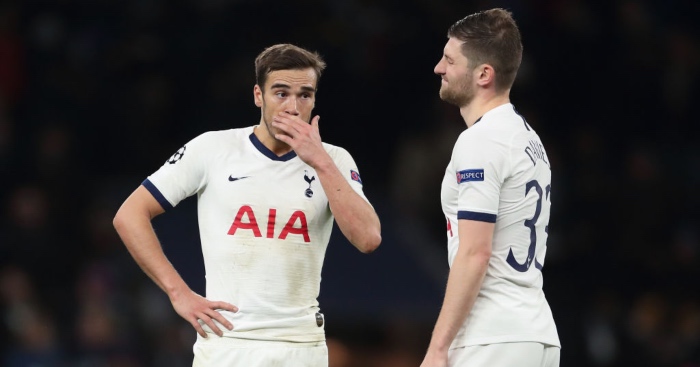 Jose Mourinho has probably forgotten more about football than the rest of us know. Even so, the aims of his Tottenham team remain elusive and against RB Leipzig on Wednesday night, Spurs were familiarly vague, sitting behind the ball with the hope that the Germans wouldn’t score.

That’s a key difference – in how this performance will be described and what it actually was. There’s nothing wrong with counter-attacking football, nor is there any harm in being deferential to a superior, talented side. But it’s Tottenham’s randomness that’s troubling. They’re getting good results and they’re scoring goals, but they’re always on a knife edge, making life harder for themselves than it needs to be.

There’s obvious mitigation for that. In the injuries to Harry Kane and Son Heung-min, both of whom are probably lost for the season, and in the fact that Mourinho is only three months into this job. Nobody expects a perfect picture, nor a completed work. But there are still questions to answer:

Why can’t this side keep the ball?

Why are their counter-attacks so aimless?

Why is their defending so full of mistakes, in the individual and tactical sense? How, when those players sit so deep, do they still give up so much space and so many overloads?

Spurs are lacking a few critical pieces and they have been short of time on the training pitch, but these are basics and they definitely do still have the players to something other than this. Mourinho may not have inherited his ideal back-four, but it should be performing better than it is. Inarguably, incontestably. His midfield and attack are also both less than fully-formed, but the group as a whole has enough ability to do more than hack the ball into space and chase after it.

As they would later prove, when they were chasing the game. At half-time on Wednesday, however, Mourinho’s players had had just 34% possession. Leipzig had hit the post twice, forced three excellent saves from Hugo Lloris and had 13 shots on goal.

That did not describe a good defensive performance. This wasn’t an instance where attacking ambition was being sacrificed for security or the game was being shut down. It was close-your-eyes-and hope-for-the-best football and, against a side of Leipzig’s class, it was doomed to failure.

These complaints aren’t instructed by some pious longing for a mythical Tottenham Way. Instead, it’s a coaching query. Mistakes happen and defenders drop in and out of form. Absolutely, that will always be true. But why, whenever Tottenham did retrieve the ball, was there nowhere to go with it? Their shape didn’t provide any avenues up the pitch – any way of releasing the pressure – and that helped to set the mood of the game. Waves of Leipzig pressure crashed down on the home box and a goal was inevitable from – quite literally – the very first minute.

Eventually the mistake arrived and finally the Germans took advantage. It was a clumsy challenge from Ben Davies and perhaps he could have done better, but it was a moment which described the margins that Mourinho’s side forced themselves to deal in. Offer that little in a game, be that passive, and you either have to defend perfectly or be incredibly lucky. In the Champions League, when away goals have such a premium, that’s especially true, because anything else is potentially fatal.

Mourinho did also made some good decisions. His substitutes worked, with Erik Lamela in particular making a tonal difference. Tanguy Ndombele was also effective, altering the threat from midfield. As a more general positive, Giovani Lo Celso had an excellent game and his quick adaption to English football is one of the minor stories of the season. He is a wonderful footballer, all tight turns, intelligence and intent.

So there’s encouragement. Probably not for this season, almost certainly not within this specific tie, but for Tottenham’s future there is. Definitely. But for the moment, they keep digging themselves holes. They play with this maddening, thoughtless inferiority which is hiding that promise and making them a far weaker side than they need to be.