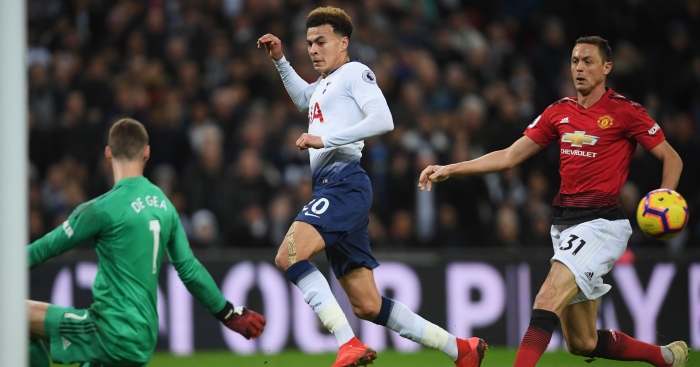 A very hard week to get right, with several options for the formation. It came down to a standard 4-3-3 and a narrow 4-2-3-1, and I went with the latter. There were several decent wing performances (they’ll be mentioned below), but no standouts, and all the candidates had been on the list before. So I picked a second defensive midfielder, a player who hadn’t made the list this season, and who may be a bit of a surprise…

Goalkeeper: David De Gea (Manchester United)
I had something really interesting to say about him (technique on the leg saves), but Daniel Storey got there first. So I’ll settle for pointing out his fantastic punch in the 93rd minute. He’s not one to ‘command his area’, as they say, but it was great to see him branching out at a crucial moment. Made some good saves too, if I remember right. Don’t forget that Hugo Lloris did himself proud as well – but there’s only one DDG.

Right-Back: Aaron Wan-Bissaka (Crystal Palace)
I don’t toot my own horn very often, but in April of last year, after he had made six starts, I called him ‘one of the real finds of the season’. This season too, multiplied by a thousand. A memorable two-way match against Watford: kept Roberto Pereyra in his hip pocket, was crucial in shutting off counters, made several good clearances, got to the line to win corners and delivered one beauty of a cross. He’s a marvel, and a true Academy product too. The best individual story of the year.

Bruno Ecuele Manga gets yet another mention for his excellent defence. Almost everyone from Huddersfield had a go at him, but no one could get past. It’s a shame he doesn’t add much to the attack. But he’s played on the right of a three-man defence as well, and that might be his best position. Kieran Trippier: attack good, defence not so good.

Centre-half: Nathan Aké (Bournemouth)
A list regular last season, first time on this year. Didn’t have a huge amount to do against Everton in the first half, but was brilliant after the interval. Won aerial duels, used his pace to run down attackers, blocked shots and crosses, and delivered an excellent goal-line clearance. Richarlison got in front of him once, but Aké’s position was so good there wasn’t a clear angle for the shot. Bournemouth have been allowing way too many goals lately, but he’s rarely the one at fault.

Centre-half: Jan Bednarek (Southampton)
The answer to the trivia question ‘Who scored a goal with his only shot last season?’ But let’s focus on his defence instead. Up until Saturday he had looked like the weak point in Ralph Hasenhüttl’s back three: a bit slow, his judgement unreliable. Against Leicester he had easily his finest match, positioning well, blocking crosses, winning everything in the air, and capping the display with a quite wonderful goal-line clearance. He’s still not exactly fast, and a couple of times looked uncertain, but was never caught out close to goal. I hadn’t realised he’s only 22 – plenty of time to improve, then. Teammates Jack Stephens and Jannik Vestergaard also played well.

Elsewhere, Victor Lindelöf is proving himself one of the best man-markers in the league, having shut down Mo Salah a few weeks ago and now nearly the same to Harry Kane in the first half. With some good second-half plays as well, he was breezing toward the list until the final minutes. First he was cleanly beaten by Dele Alli in the box and only saved by a well-known Spaniard. Then he was cleanly beaten by Harry Kane in the box and only saved by a similar Spaniard. If you excel over 90 minutes, Team of the Week allows you one big mistake, but not two. No argument about one thing, though: he’s first choice for United until further notice.

Left-back: Andrew Robertson (Liverpool)
An ordinary week at this spot, with Robertson and Aaron Cresswell the best choices. Both made decent contributions at both ends without really setting the pulse racing. I went with Robertson because he should have had an assist when his cross found Roberto Firmino’s right foot – to be honest, though, I think he was aiming for Sadio Mané. In keeping with the new Liverpool, lately he’s been good rather than spectacular, which will do just fine. Cresswell has fought off injuries to become a steady performer under Manuel Pellegrini, and that’s fine too.

Elsewhere, Luke Shaw had a useful match against Spurs, playing solid defence throughout. Maybe he could have challenged Trippier on a few of those crosses. Speaking of which, Lucas Digne is seriously challenging Trippier and Pascal Gross for the official Best Crosser In The League title.

Deep Midfielder: Declan Rice (West Ham United)
These days he can be hard to evaluate, because he’s usually in a central midfield two with Mark Noble, and anyone not named Kanté might find that difficult. Even when Rice is playing well, there’s a lot of space around him, and he can get bypassed. That happened more than once against Arsenal. But overall he was excellent, covering a lot of ground, reading the game well, and getting forward at times to help out the attack. Made one or two more bad passes than usual, but I love his intelligent use of the ball, and he’s quite good in the air as well. Might have made the list anyway, but the goal puts him over the top.

I legit love this photo so much. Antonio, Cresswell and Arnautovic all looking back & smiling as they know how much it means to Declan Rice. Class to see. 👏🏻👏🏻👏🏻 pic.twitter.com/H5iyMrIsTZ

Deep Midfielder: Nemanja Matic (Manchester United)
The surprise. Didn’t get a lot of press, but had a strong match at Wembley. Like Rice, his passing was a bit below his standard, but like Rice he played smart football, picking his spots to advance and retreat, positioning well consistently. He also made a timely block on a Harry Kane shot. After watching the video, I rated him well above Ander Herrera, who made some notable plays in the final minutes but was average, maybe even below, the rest of the time. His judgement was inconsistent and he was left chasing all too often. He also gave away a free kick in a dangerous position. I’ve been a fan of his since day one, but this wasn’t anywhere near his best match.

A word for @AnderHerrera and @NemanjaMatic. Alot of others might get the headline but they were soldiers in the middle. Solid. Eager to get on the ball and effective with it. My guys#MUFC #TOTMUN

Closest to Matic in the queue was Harry Winks, who for the first time in his life looked like a genuine holding midfielder. Ten interventions (five tackles, three interceptions, two clearances), which is five more than his previous high for the season. Had he not been so wasteful at the attacking end, would have grabbed the spot. Jonathan Hogg had a good match for Huddersfield against an uninspired Cardiff.

Attacking Midfielder: Dele Alli (Tottenham Hotspur)
My man of the match. Was essential to most of Spurs’ best attacks, and except for the best shot-stopper in the world, would have had a couple of Gs next to his name. It’s no use talking about how he should have shot farther from the keeper, because everyone should always shoot farther from the keeper. It’s just that every once in a while the keeper is named De Gea. Alli isn’t scoring or assisting as much as in previous years, so he’s not getting as much attention. But he’s been seriously good at times, and this might have been his best match of the season.

Attacking Midfielder: Samir Nasri (West Ham United)
In the supremely eloquent words of Alexei Sayle, fookin’ amaaaazing! Here’s a guy who hadn’t played in almost a year, and never with this particular set of teammates – and he made Arsenal look like they weren’t even on the pitch. Played as a super-extra number 10, attacking first and defending not at all. Was totally on his mates’ wavelength, completing 84.4%, playing some delightful short-short passes, and getting the assist when Rice struck home. The most remarkable thing about the performance was his Rorschach heatmap, perhaps the most completely symmetrical you’ll ever see. Left after 70 minutes, like a famous magician wowing a party and departing with a flourish. Fookin’ amaaaaaaazing!

Attacking Midfielder: Paul Pogba (Manchester United)
I actually thought of leaving him off, since he could very well have walked for that high leg on Alli. But he absolutely took control of the match for a while in the second half, and like Alli, would have tallied twice except for great goalkeeping. There was also that rather stunning assist for Marcus Rashford. His new manager seems to see him as an attacking midfielder, so I say let the good times roll. There’s no excuse for his attitude problems under Mourinho: as a professional, you have to do your best every time out. But it’s now 100% clear the league just had a fabulous player under the wrong manager.

Several wingers had good matches, but as noted, none stood out and they’d all been on the list before. Felipe Anderson played on both wings and was a force against Arsenal, Pedro scored once and was robbed of a second, Leroy Sané was lively and ho-hummed yet another assist, Marcus Rashford scored a marvellous goal, Gerard Deulofeu (nominally a striker but playing mostly on the wing) hit the post, could easily have had an assist, and caused plenty of problems with his pace. A mention too for Ademola Lookman of Everton, whose overall performance wasn’t quite in that class, but who impressed with confident running and passing. He was nicely rewarded with an assist on the last kick of the match. Can he take Theo Walcott’s spot?

Striker: Gabriel Jesus (Manchester City)
Not a dominant showing, but in a very thin week, the clear choice. Scored from open play and on a neat stutter-step penalty, and was nimble throughout. Ran at defenders, came back for the ball effectively, passed well. With four goals in his last three league starts, plus four more against Burton Albion, his drought is well and truly over. He and Sergio Agüero should be quite the tandem down the stretch.

Let’s also give Harry Kane some credit. Once he was going up against Phil Jones instead of Victor Lindelöf, he was at his Kaneliest, doing just about everything a striker can do. Except score, of course, but we all know why.

A final word: sad to see David Wagner leave Huddersfield. We expect football managers to be forces of nature, untiring and implacable. Often they seem that way, too. But like us, they’re people, and sometimes people need a rest. Here’s hoping he comes back refreshed and ready, at the club of his choice.