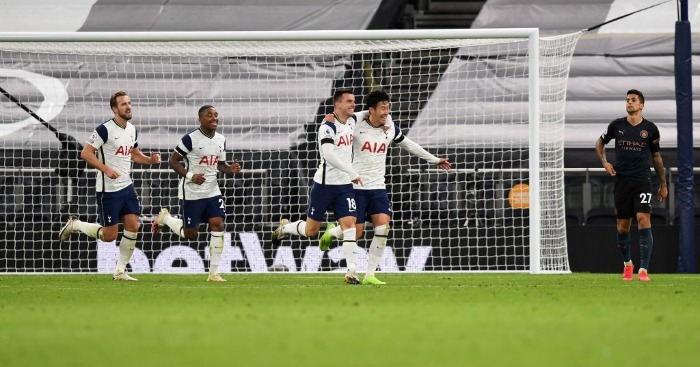 Heung-Min Son and Giovani Lo Celso scored either side of half-time to give Tottenham a well-deserved win over Manchester City.

Counter-attacking goals in each half from Son Heung-min and substitute Giovani Lo Celso handed Spurs a statement victory despite Pep Guardiola’s men dominating possession in the capital.

The City boss signed a contract extension this week, but was not able to toast it with three points after his team failed to breakdown the disciplined and organised hosts.

It meant Mourinho, who celebrated a year in charge of Tottenham on Friday, again got one over his old rival to send the north Londoners back to the top of the table for at least 24 hours.

Both clubs paid tribute to the late Ray Clemence before kick-off with a minute’s applause while Spurs’ players wore black armbands for their former goalkeeper, who won trophies at White Hart Lane and with Liverpool.

Mourinho had predicted Raheem Sterling would start for City despite being unavailable for England due to a calf injury, but he was only named on the bench where he was joined by the fit again Sergio Aguero.

Without their number seven, Guardiola recalled Riyad Mahrez while Bernardo Silva came in for Ilkay Gundogan and yet it was at the other end of the pitch where familiar problems reared their ugly head.

Only five minutes had been played when Tanguy Ndombele threaded a pass into the path of Son, who ran into space vacated by Aymeric Laporte and Ruben Dias and slotted through the legs of the onrushing Ederson for his ninth league goal of the campaign.

It was a poor lapse in concentration for the visitors, who switched off and were then not tight enough to the in-form South Korean.

City may have been level with nine on the clock, but Toby Alderweireld impressively denied Gabriel Jesus inside the area before the Brazilian inadvertedly blocked a goalbound shot by captain Kevin De Bruyne.

The ball was in the away net again in the 13th minute; yet Kane had strayed into an offside position after a selfless Son pass.

Spurs were happy for City to control possession with Mourinho watching his side produce the type of disciplined display which has become his trademark.

A momentary drop in focus was all Guardiola’s side would need and they thought it arrived with 27 on the clock.

Rodri’s cross into the area came through to Jesus, who set up the unmarked Laporte and the French defender drilled past Hugo Lloris from inside the area to make it 1-1.

No one had picked up the centre-back but Tottenham were saved by the pitchside monitor after VAR recommended Mike Dean use the technology to review if Jesus had used his arm to control the ball and City’s number nine duly had.

The frustration of the away side was visible at half-time and even though Mahrez tested Lloris early into the second period, it was routine for the Spurs captain.

Eric Dier and Alderweireld produced timely interventions on the hour mark in the face of relentless pressure before Mourinho replaced the excellent Ndombele with Lo Celso in the 65th minute.

It was an inspired change with the Argentinian scoring 35 seconds into his arrival from another Kane assist.

Alderweireld found the England skipper in the middle of the pitch, who spotted Lo Celso had run away from De Bruyne and after the substitute took a touch into the area, he steered into the corner for his first ever Premier League goal.

Mourinho was able to celebrate another masterstroke and Tottenham were within touching distance of a statement win.

Guardiola responded by introducing England duo Sterling and Phil Foden, but the closest they came was when Lloris produced a point-blank save from a Dias header.

It was not all positive for Spurs who saw Alderweireld leave the pitch with an injury nine minutes from time, but they have replaced Chelsea at the summit and extended their unbeaten league run to eight games.

For City, in spite of a match in hand, they now trail the leaders by eight points and continue to lack a clinical edge in both boxes.