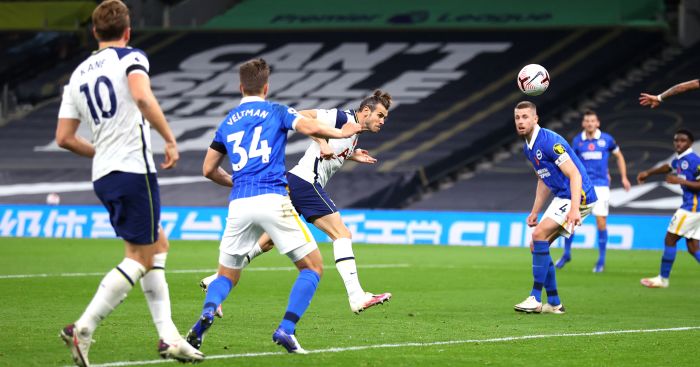 Gareth Bale stepped off the bench to score the first goal of his second Tottenham stint and secure a 2-1 victory over Brighton which sent his side second in the Premier League.

Bale’s return to Spurs has been hampered by a knee injury and lack of pre-season, but he made his first real impact by heading home the 73rd-minute winner just three minutes after coming on.

It got his side out of trouble against the Seagulls, who deserved at least a point and will be cursing VAR official Jonathan Moss for his role in the game.

Moss awarded Spurs an early penalty, adjudging Harry Kane was fouled inside the box when it looked marginal, with Kane sending the spot-kick home for his 149th Premier League goal.

The official then ruled Brighton should not be awarded what looked a clear penalty of their own, and even advised referee Graham Scott to check Tariq Lamptey’s second-half equaliser, but the goal stood.

It was Bale who had the final say, though, to ensure Spurs won at home for the first time this season and move up to second in the league, two points behind leaders Liverpool.

It was another case of what could have been for Brighton and they sit in 16th, having taken five points from their opening seven games.

A strong Spurs start was rewarded with a 13th-minute opener as Moss’ first intervention of the evening arrived.

Referee Scott had awarded a free-kick on the edge of the area after Adam Lallana had toppled Kane, but Moss watched it back and ruled it occurred inside the penalty area.

It was a marginal decision, but Spurs were not complaining and Kane coolly slotted home the resulting spot-kick for his 199th Spurs goal, 149 of which have come in the Premier League, to move him to joint 10th in the all-time scorers list with Les Ferdinand.

Ten minutes later Moss was involved again as he was asked to check for a possible penalty at the other end.

Leandro Trossard went to ground and it looked as if Matt Doherty might have pulled him back, but Moss decided otherwise and Spurs breathed a sigh of relief.

Although Brighton did not get the decision they felt they deserved, they used it as a launchpad to control the rest of the half.

They were getting in down the channels and forcing plenty of set-pieces, but for all their endeavour they failed to test Spurs goalkeeper Hugo Lloris.

The equaliser did come 11 minutes after the restart as the Seagulls struck with their first effort on target.

They won the ball back high up the pitch and Pascal Gross laid it on a plate for Lamptey, who slotted home.

It did hang in the balance, though, as Scott watched several replays of the tackle on Pierre-Emile Hojbjerg by Solly March in the build-up before eventually allowing the goal to stand.

Spurs were finally forced to wake up and they twice hit the woodwork in quick succession as they tried to regain superiority.

First Erik Lamela’s low drive from 20 yards cannoned into a post and debutant goalkeeper Robert Sanchez produced a stunning save to keep out Joel Veltman’s skewed clearance from the rebound.

Then moments later Kane was unable to score as a corner made it through to the back post and he put his effort into the post from close range.

Brighton could not survive much longer, though, as Bale made his mark soon after coming on.

Toby Alderweireld’s long pass to Sergio Reguilon stretched the play and the Spanish left-back teed up his former Real Madrid team-mate, who sent a free header into the corner.