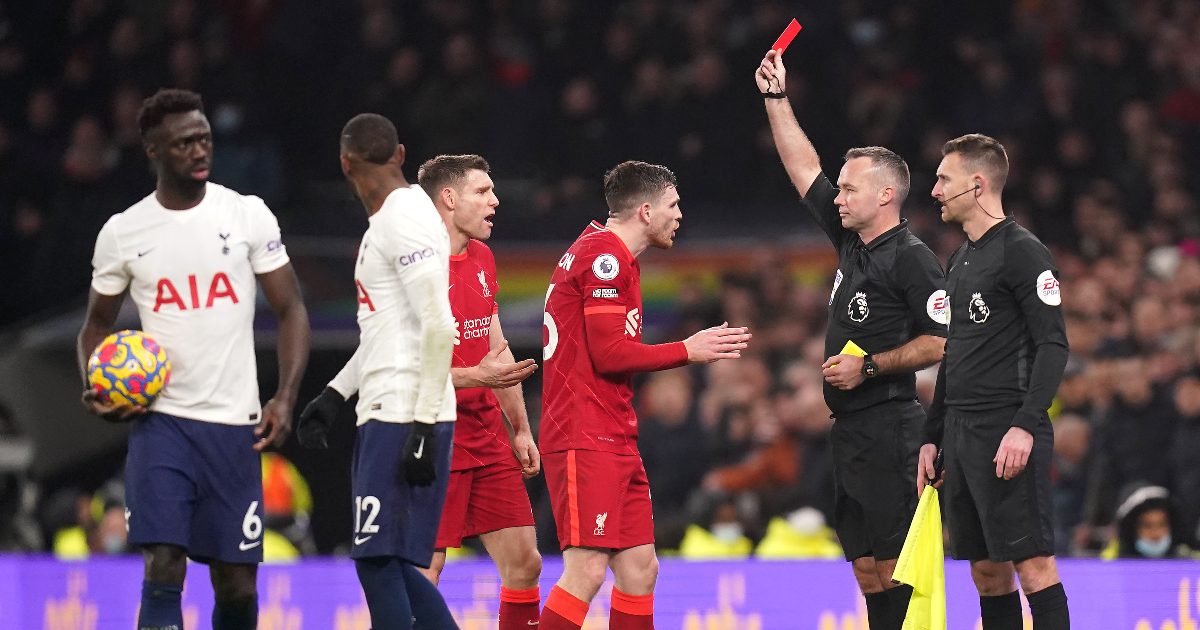 Andy Robertson scored and got sent off as Liverpool shared the points with Spurs in a thriller at The Tottenham Hotspur Stadium.

Spurs and Liverpool combined to provide their supporters and neutrals with a great game in North London.

The visitors went 2-1 ahead as goals from Diogo Jota and Robertson cancelled out Harry Kane’s opener. Heung-Min Son were able to equalise late on to earn Tottenham a point.

Robertson was then sent off for a wild kick on Emerson Royal after VAR upgraded his yellow card, but there was controversy in the first half when referee Paul Tierney did not even look again at Kane’s studs-showing tackle on the Scot.

Liverpool also felt they should have had a penalty in the first half after Jota appeared to be bundled over, while Spurs felt Dele Alli was fouled in the box prior to Robertson scoring.

In the end a draw was a fair result but Spurs will be left to rue missed chances at key points in the game.

When the dust settles on this breathless thriller, Liverpool find themselves going into Christmas three points adrift of leaders Manchester City, but with Covid-19 in their camp they will be unsure of what may lie ahead in the festive period.

For Spurs it was a fifth Premier League game without defeat for Antonio Conte, who will be confident his side can challenge for the top four in the second half of the season.

A fighting performance after a difficult few weeks. 👊

Spurs were recovering from nine players testing positive for coronavirus while Liverpool’s preparations for the game suffered more disruption after Thiago Alcantara tested positive – joining Virgil Van Dijk, Fabinho and Curtis Jones – while Jordan Henderson was ill but does not have Covid.

And they found themselves behind early as Spurs came to life and took the lead in the 13th minute, with Kane finally ending his drought.

Harry Winks did well to win the ball back high up the pitch, Tanguy Ndombele slipped in Kane and the England captain rolled the ball into the far corner for his first home league goal of the season.

He was on a high and his enthusiasm spilled over in the 20th minute as he was booked for a challenge on Robertson, which if was reviewed by VAR might have been upgraded to a red.

But Spurs were humming and caused Liverpool all sorts of problems on the break, creating two clear chances to extend their lead.

First Kane broke down the right but his pass just asked too much of Son, who could only squirt his shot wide.

Alli will have nightmares about his missed chance just before the half-hour as the pace of Son again had Liverpool on the rack and the South Korean’s pass was perfect for Alli, who was unmarked on the penalty spot but saw his shot saved by Alisson when he should have buried it.

Robertson surged on to a loose ball in the area and stood up a cross that Jota planted into the corner for his sixth goal in seven games.

The Reds sensed blood and had Spurs on the ropes and they could have had a penalty before the break as Emerson clattered into Jota but referee Tierney said no.

Tottenham had two more unbelievable chances to regain the lead after the break, but Kane squandered them both.

He was arguably left short from Alli’s square pass which allowed Alisson to block with his body for the first of them and from the resulting corner he somehow nodded over at the far post with the goal gaping.

Spurs were again punished for being wasteful as Robertson nodded home at the far post in the 69th minute after Trent Alexander-Arnold fizzed the ball back across goal.

The lead did not last long, however, as five minutes later Alisson gifted the home side an equaliser.

Winks’ through-ball was easy for the Brazil goalkeeper to clear but he inexplicably missed his kick, allowing Son to convert into an open goal.

The drama kept on coming as Robertson was sent off for a kick on Emerson in the 77th minute.

Tierney initially gave a yellow card but upgraded his decision after VAR’s intervention.

Neither side could find a winner as it ended 2-2.