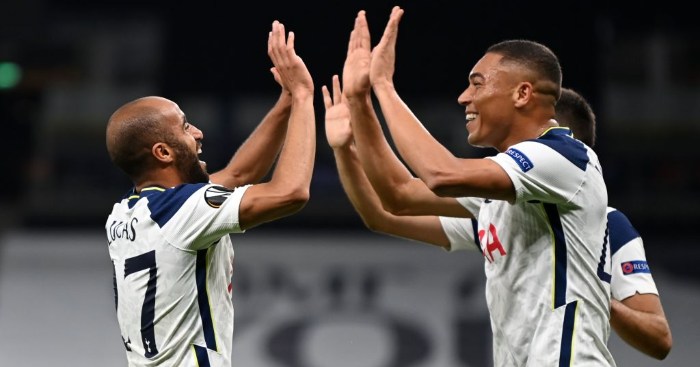 Carlos Vinicius shone as Jose Mourinho’s side earned a comfortable victory over LASK in their Europa League Group J opener.

Vinicius was starting for the first time as Jose Mourinho gave Harry Kane the night off and he made goals in either half for Lucas Moura and Son Heung-min, while he would have also netted himself had Andres Andrade not scored an own goal.

Gareth Bale started the first game of his second spell and made that goal where Andrade put through his own net, but it is clear the Welshman is still some way off his peak physical condition.

It was a comfortable night for Mourinho’s men in north London as they were not tested against a weak Austrian side and made a good start to a hectic group stage which is packed into an eight-week period.

Vinicius, a loanee from Benfica, endured an inauspicious start as he missed an eighth-minute sitter, somehow putting a header wide from the middle of the penalty area.

Things got better for him though 10 minutes later, as he produced a fine assist to allow Moura to open the scoring.

Vinicius took Ben Davies’ ball over the top in his stride and then played a reverse pass for his compatriot to slot home.

The 25-year-old would have opened his account in the 27th minute had Andrade not put through his own net when intercepting a cross from Bale, with Vinicius ready to pounce.

It was almost three immediately from kick-off as Erik Lamela won possession, then got it back off Vinicius before seeing his low shot slip through the hands of Alexander Schlager, who was able to retrieve the ball from the line.

Spurs were coasting, but had Joe Hart to thank for keeping their two-goal lead intact as the former England goalkeeper produced a flying save to deny Andreas Gruber’s shot from distance.

Lamela did almost get his goal shortly after the restart as he twisted and turned in the box but his shot went wide of the post.

Bale departed just after the hour in what was a pre-planned substitution. It was not a vintage night for the Welshman but one where he got important minutes.

Spurs had chances to rack up a handsome lead, but Matt Doherty headed over, Son Heung-min had a shot saved and Moura also sent a header the wrong side of the crossbar.

Vinicius was involved in everything that Spurs did and he laid a golden chance on a plate for Dele Alli.

The Brazilian timed his through ball to perfection and Alli was clear in the box with time and space but his low shot was saved by Schlager.

Similar to the Lamela chance in the first half, the ball rolled towards the goalline but the keeper recovered with a yard to spare.

Vinicius was not done as he cleverly nodded Doherty’s cross into the path of Son, who converted his ninth goal of the season.