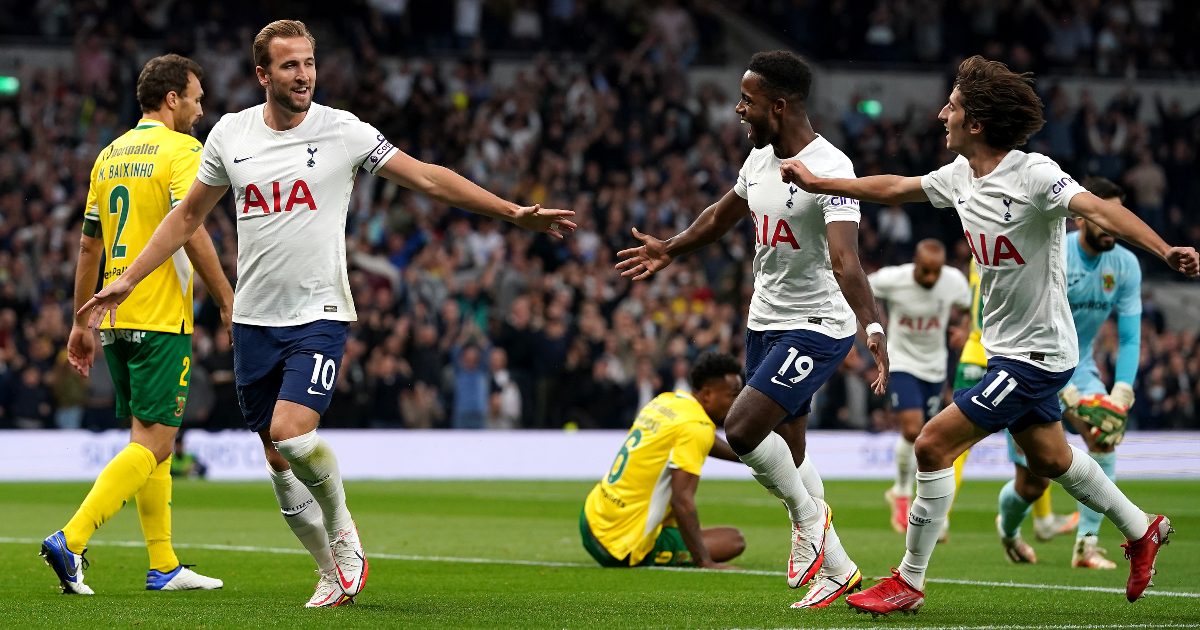 Harry Kane netted a brace in his first start of the season for Tottenham as he helped them advance in the Europa Conference League.

A day after the England captain announced he would be staying at his boyhood club after a coveted move to Manchester City never materialised, he went some way to repairing his relationship with a brace that helped overturn a 1-0 first-leg deficit.

The last time Spurs played at their north London home, fans chanted ‘Are you watching Harry Kane?’, with the striker not involved in the Premier League opener against City having failed to report to pre-season training on time.

But all was forgiven against the Portuguese outfit as the 30,000-plus crowd let their star striker know that he was still ‘one of our own’.

Two goals in the opening 35 minutes reminded everyone just why Spurs refused to sell him to City and Giovani Lo Celso’s deflected second-half free-kick sealed the game.

Kane moved his tally to 223 goals for the club and, with his short-term future now sorted, he will have eyes on Jimmy Greaves’ record total of 266 – a marker he could conceivably catch this season.

This night was always going to be about Kane and he could have opened the scoring after just 18 seconds.

Cristian Romero’s long ball over the top was controlled dead by the striker, but he scooped his effort over the top.

He did not need much longer to mark his return with a goal as he powered Spurs ahead on the night in the ninth minute.

Harry Winks retrieved the ball well, played in Bryan Gil and the Spanish winger’s cross was expertly controlled and fired home by Kane.

It was a special reaction by the fans in the stadium, and any worries Kane had about how he would be received following this summer’s transfer saga would have been eased.

His second came 10 minutes before the break as his blocked shot fell to Lo Celso, who tried to fire home a rebound, but the ball found its way back to Kane and he made no mistake.

If Kane was the star of the show, then Gil, making his home debut following his summer move from Sevilla, was the understudy as he showed why people are so excited by him.

He hit the post with an effort in the first half and then saw another goalbound strike blocked after the restart.

It was a barrage of attacks from Spurs and their third goal came in the 70th minute.

Lo Celso fizzed a free-kick in from a wide right position, which took a nick of Pacos defender Antunes and flew into the corner, with the Argentinian being credited with a goal.

Kane left the pitch shortly after to a hero’s reception and could have been in no doubt that he is still loved at the club he actively tried to leave this summer.