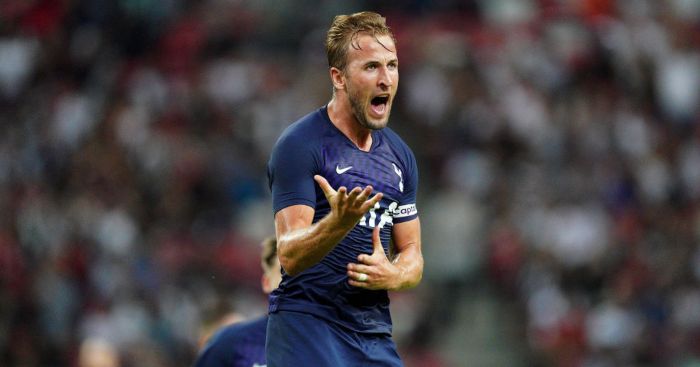 Harry Kane scored an unbelievable goal from the halfway line as Tottenham beat Juventus 3-2 in the International Champions Cup.

Erik Lamela gave Tottenham the lead in the first half before Gonzalo Higuain and Cristiano Ronaldo struck back after the break for Juve.

Lucas Moura leveled things up on 65 minutes before England international Kane pulled off a wonder strike in injury time to win the match for Spurs.

Good to be back 😉⚽ #COYS pic.twitter.com/0IyYufatit

Unlike Manchester United v Inter Milan on Saturday, there were a few empty seats at the National Stadium – although those in attendance were arguably more excitable.

There was a strong South Korean contingent at Singapore’s National Stadium and they made themselves heard whenever Son Heung-min got on the ball.

Excitement rose when he hit the outside of the post after four minutes, while Ronaldo tried an overhead kick in a promising start to the International Champions Cup encounter.

The Portuguese flashed a fierce shot wide but Spurs were looking brighter and broke the deadlock on the half-hour mark.

Son showed good composure and awareness to lay off to the overlapping Troy Parrott. The 17-year-old saw a low shot was saved by Juve goalkeeper Gianluigi Buffon, but Lamela was on hand to direct home.

A drinks break followed a goal that took the sting out of the remainder of the opening period, with the Mexican waves in full flow as the whistle was blown for half-time.

Both sides made a variety of changes at half-time. Moura was among the Spurs introductions and saw a penalty appeal rejected shortly after the restart.

Spurs were pushing but Juventus levelled in the 56th minute as former Chelsea man Higuain hit a low shot past Paulo Gazzaniga.

Kane clipped the post as Mauricio Pochettino’s men looked to immediately regain the lead, only for Ronaldo to pop up at the other end and smartly direct into the far corner.

The Singapore crowd were witnessing an entertaining encounter, with Matthijs de Ligt brought on for his first appearance since signing from Ajax.

Tottenham brought on summer signing Tanguy Ndombele at the same time and he quickly made an impact, threading a pass through for Moura to smartly direct home.

The France midfielder curled just wide and Federico Bernardeschi stung the palms of Gazzaniga as the match continued to ebb and flow.

Kane poked an effort just wide and would settle the match just as a penalty shoot-out loomed large.

Moura won possession and the England captain unleashed a stunning first-time shot from just inside the Juventus half that beat Wojciech Szczesny, sending the crowd wild and securing a 3-2 win in scarcely believable circumstances. It is a goal that will live long in the memory.