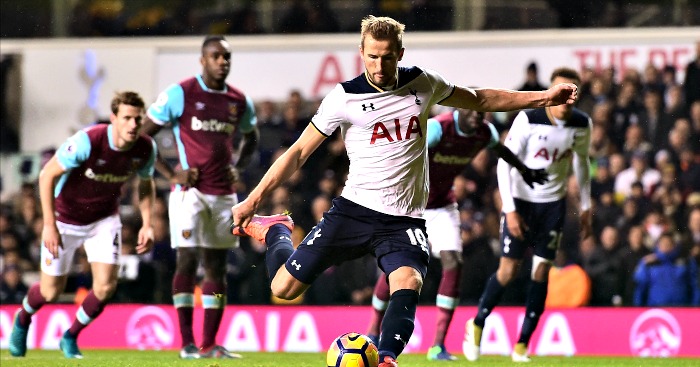 Tottenham sealed a 3-2 victory in the most dramatic of fashions against West Ham, with Mike Dean playing a starring role.

West Ham took the lead through Michail Antonio in the first half, only for Harry Winks to equalise in the 50th minute.

The visitors then took the lead when Manuel Lanzini converted from the penalty spot, but Harry Kane struck in the 89th minute to seemingly salvage a draw.

But referee Dean awarded the second spot-kick of the game in injury time, with Kane converting to hand Tottenham a first win in eight games.

Winston Reid was sent off in injury-time to round off a pulsating London derby that leaves West Ham 17th in the table, one point above the relegation zone, while Spurs sit fifth and three points off the top.

Kane’s double means he now has five goals in the league already this season and three in two games since coming back from a seven-week lay-off with an ankle injury.

The striker’s potency in front of goal has been desperately lacking in recent weeks and Mauricio Pochettino will hope his return to form, combined with this adrenaline-pumping win, will be enough to lift Tottenham out of their recent slump.

For West Ham, it comes as a crushing defeat but Slaven Bilic will at least take heart from his side’s determined display, that yielded more than one goal for the first time in seven Premier League games.

These clubs’ rivalry has been ramped up in recent months, with one already in a new home and the other soon to move, and West Ham’s travelling support could hardly not have noticed the towering cranes overlooking Tottenham’s fast-growing arena next door.

The Hammers’ problems in adjusting to the London Stadium have, however, surely been less significant than those on the pitch, not least their struggles in front of goal where still not one of the club’s strikers has scored in 18 matches this season.

Diafra Sakho started his first game of the campaign, having returned from a back injury, and the Senegalese did offer his side a focal point before going off to be replaced by Simone Zaza in the second half.

Tottenham have found goals equally hard to come by in recent weeks – Winks’ strike was their first from open play in seven matches – and Pochettino made the bold move of starting Kane and Vincent Janssen together for only the second time this term.

Winks, however, was the surprise pick and he started brightly, firing narrowly wide from distance and then feeding Kane, who unleashed a stinging drive but missed the target.

In between, Christian Eriksen had found the net by finishing off Eric Dier’s chipped ball forward but the Dane started his run moments too early and was rightly flagged offside.

Despite Spurs’ lively opening, West Ham were far from overawed and it was the visitors who broke the deadlock in the 24th minute.

Pochettino and his assistant Jesus Perez were barking out orders as their team set up to defend a corner and their anxiety proved justified as Cheikhou Kouyate crashed a header against the crossbar, Reid scuffed the follow-up and Antonio was left free to head home from close range.

It was Antonio’s sixth goal of the season, every one of them a header.

Tottenham dominated possession but their lack of incisiveness became a growing source of frustration before half-time and it was no surprise when Janssen booted Kouyate across Pochettino’s technical area with a belligerent, albeit fair, challenge, that sent water bottles flying and Bilic into a fit of rage.

Otherwise, West Ham had looked relatively comfortable, but Antonio’s threat going forward is often tinged with a vulnerability at the back and early in the second half Spurs capitalised.

Danny Rose skipped past the Hammers goalscorer down the left before crossing to Janssen at the near post.

The striker’s shot was parried by Darren Randolph, only for Winks to bundle in the equaliser. Winks, who joined the club’s academy aged 16, celebrated like it was a moment he would never forget, with Pochettino at the centre of a bundle of white and blue.

The momentum appeared to be with Tottenham but West Ham refused to keel over and instead they restored their lead as Janssen conceded a penalty by pulling down Reid in the box. Referee Mike Dean pointed to the spot and Lanzini converted.

The visitors should have put the game to bed in the final 10 minutes as both Dimitri Payet and Zaza had excellent opportunities on the break, and they paid the price.

First, substitute Son Heung-min raced past Antonio and as his cross was palmed out by Randolph, Kane was on hand to tap into an open net.

Then Son was brought down needlessly by Havard Nordtveit in the area and after Dean awarded the penalty, Kane made no mistake.

Reid’s second yellow card late on only added to the home supporters’ delight.