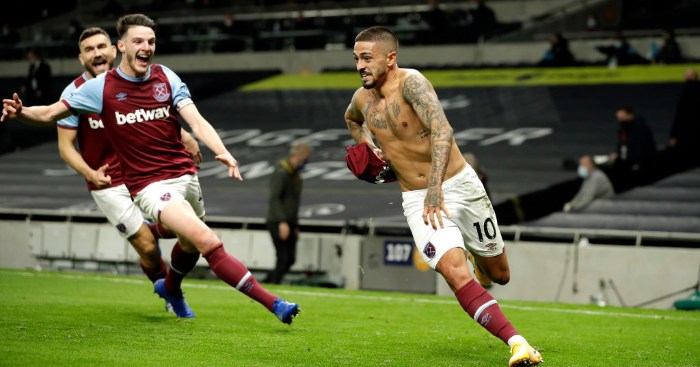 Manuel Lanzini stole the headlines with a stunning last-gasp strike that completed an unlikely comeback for West Ham.

West Ham ruined Gareth Bale’s return to the Tottenham team as they scored three goals in the final eight minutes to steal a 3-3 draw in north London.

The Hammers were dead and buried after Spurs raced into a 3-0 lead after just 16 minutes as Son Heung-min’s opener after 45 seconds and Harry Kane’s double put them in total control.

They were still winning 3-0 when Bale came on as a 72nd-minute substitute but it all went wrong at the end as Manuel Lanzini’s stunning stoppage-time strike completed a comeback started by Fabian Balbuena and a Davinson Sanchez own goal.

The result will leave Jose Mourinho utterly sick as they threw away two points for the second successive home game and leaves them unable to impose themselves on the early Premier League table.

For West Ham, the comeback continued a promising start to the campaign following good wins over Wolves and Leicester.

It was a devastating end for Spurs, who made a similarly dramatic start, sweeping their opponents away.

They needed less than a minute to go ahead as Kane played the orchestrator with a perfect long ball for Son, who cut inside from the left and curled into the bottom corner.

It was the South Korean’s sixth league goal of the season and Kane had made five of them.

Son returned the favour seven minutes later as he found Kane, who nutmegged Declan Rice and fired into the bottom corner from the edge of the area.

This meant the pair had combined for goals seven times in the opening five league games.

Mourinho’s men were rampant and Kane scored his fifth league goal of the campaign after rounding off a nice move by heading home Sergio Reguilon’s cross.

The Hammers, shell-shocked by the start, did at least stem the tide as the first half went on, though had Lukasz Fabianski to thank them from going 4-0 down as the goalkeeper did well to block Son’s close-range effort.

Kane showcased just how good an all-round player he is as on the stroke of half-time he made a telling contribution at the other end when he flung himself in front of Vladimir Coufal’s goalbound shot, which earned a celebratory handshake from Mourinho.

West Ham started the second half well and should have reduced their arrears, but Pablo Fornals missed a sitter, somehow heading over Michail Antonio’s deflected shot just two yards out.

Spurs were unable to recreate the verve of their brilliant opening, but still looked more likely to add to the scoring, with Fabianski getting down low to deny Kane a hat-trick.

Mourinho finally gave Spurs fans what they had been waiting 2,710 days for in the 72nd minute – Bale back on the pitch in the white shirt and he eyed up a dream return, but his ambitious free-kick with his first touch was easy for the Hammers keeper.

Kane was desperate to claim a second hat-trick of the season and was denied by the post as he curled an effort from the edge of the area.

Then came West Ham’s response as Balbuena headed home Aaron Cresswell’s 82nd-minute free-kick to give them hope, which was intensified three minutes later when Sanchez headed Coufal’s cross into his own net.

Bale had the chance to steal the headlines as he weaved his way into the box but somehow put his shot wide after doing all the hard work.

In the end, that proved a costly miss as West Ham stole a draw with virtually the last kick.

Spurs could not clear another free-kick and Lanzini stuck a 20-yard shot into the top corner to spark chaotic scenes of celebration.