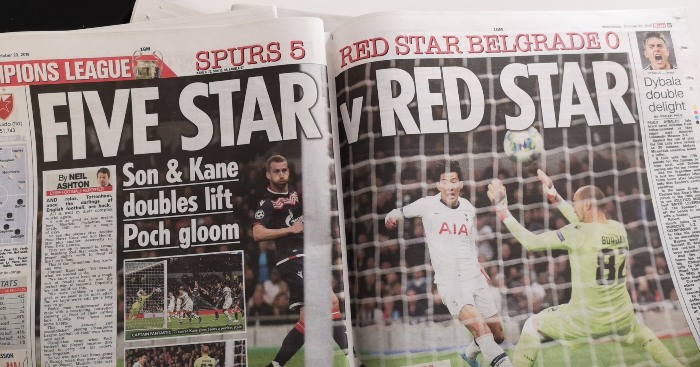 The Banishing
Tottenham beat Red Star Belgrade (no wins in ten away games in Europe) 5-0 on Tuesday night. Thankfully, that victory has ‘banished the humiliation of their 7-2 defeat to Bayern Munich from three weeks ago’ (The Sun).

It really is, with Chief Football Reporter Neil Ashton – who seemingly has the memory of a gnat – declaring that the crisis is definitely over for Tottenham, who have now beaten Aston Villa, Crystal Palace, Southampton and Red Star Belgrade this season. All at home.

‘AND relax. Tottenham, once the darlings of English football, are back.

‘All is well and good in their complex world again.’

Really? Is it? Shall we remind you of that when/if they get battered by Liverpool on Sunday to potentially leave themselves eight points off the Champions League places?

One day Ashton might find a place between ‘everything is awesome’ and ‘everything is awful’ but maybe that place does not exist at The Sun, which is simultaneously printed in both colour and stark monochrome.

One Dayot like this…
‘ARSENAL will make a cut-price move for France centre-back Dayot Upamecano to boost Unai Emery’s defensive worries,’ is quite the exclusive from The Sun’s Mike McGrath on Wednesday morning.

Although it does beg the question as to whether ‘boosting’ someone’s ‘defensive worries’ actually makes them worse. ‘Alleviate’ or ‘ease’ would surely be better?

Anyway, it would be quite the exclusive if his Sun colleague William Pugh had not written on Monday afternoon that ‘ARSENAL are in pole position to land RB Leipzig defender Dayot Upamecano after failing to land him in the summer, according to reports’, having read said reports from Italy.

But McGrath perhaps has more details, writing that ‘the Gunners failed with a £40million move for the Red Bull Leipzig youngster but the German club are braced for a fresh bid’.

The problem with that sentence? It links to yet another Sun story from August. The headline? ‘Arsenal fail in £55m transfer offer for RB Leipzig centre-back Dayot Upamecano.’

Ballon d’More?
‘When questioned about the significance of having so many players recognised for what is still the most prestigious individual award in football, Jürgen Klopp’s first response was simply to ask “Who has not been nominated?”

‘Klopp had a point, too, as despite the fact that seven nominations is remarkable in itself, Liverpool could feasibly have made up virtually a third of the nominees. Given Alexander-Arnold’s inclusion, Andy Robertson can feel hard done by to be left out, while there has arguably not been a better defensive midfielder in 2019 than Fabinho.’

Red, red and blue
Want to know the latest from Liverpool? Then head to the Liverpool Echo for their live blog…

Want to know the latest from Liverpool, Didi Hamann, Bayern Munich and Manchester City? Then head to the Liverpool Echo for their live, sorry LIVE, blog.

‘In fairness to Hazard, he set up Toni Kroos for the winner after he had the chance to shoot himself, but pulled it back for the German ghosting into the box.’

In fairness to Hazard, declaring him a ‘flop’ seven games into his Real Madrid career is a very sodding low blow.

What did he do? Wail? Scream? Kick him in the head?

Not quite. Zidane actually reacted to that miss from ‘Chelsea hero Eden Hazard’ (who ‘struggled against Galatasaray on Tuesday evening’ with the only assist of the night) with these cutting words:

“It doesn’t worry me. He’s better and he’s going to improve more. The important thing is that he continues to have chances, because he’s going to put them in.”

To be fair, you don’t get those quotes ‘trending’ unless you bury them way, way, way down.

Burying the bad news
The Daily Mirror claim that ‘Paul Merson makes Champions League predictions – and it’s bad news for Man City’, but really, it’s just bad news for Sky Sports that Merson is allowed (nay, paid) to spout such nonsense as this:

“City are a very good team, but they are not going to win the Champions League, playing against the best teams in Europe, with two holding midfielders in defence.”

Indeed. Which is probably why they will play excellent centre-half Aymeric Laporte and another actual defender when they are playing against the best teams in Europe and people are back from injury.

Money, money, money
There is an excellent piece on The Athletic about Diego Maradona. But the rather sad thing for journalist Jack Lang is that it is more than likely that the Daily Star website‘s Matthew Cooper will bag himself a whole lot more hits with this chop job that does not even credit the original source.

And that – in a nutshell – is why we have ourselves some massive doubts about the subscriber model in the UK.