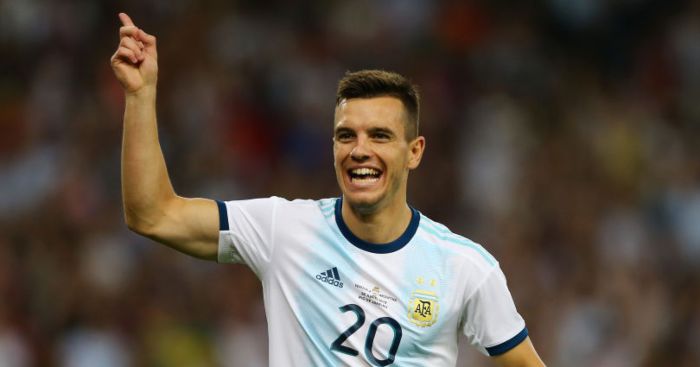 Tottenham are considering their next transfer targets after making two signings in the space of around five hours.

After not conducting a single incoming transfer for 517 days, Tottenham broke their club record to bring in Tanguy Ndombele on the same day as Jack Clarke’s arrival from Leeds.

The beaten Champions League finalists are unlikely to end their business there, however, with Mauricio Pochettino eager to refresh and reinforce his squad.

The Daily Mail say this will be ‘a hectic summer of ins and outs’ in north London, with a move for Giovani Lo Celso likely to be revisited.

A £53m bid for the Real Betis midfielder was rejected last month, and it has been claimed that £70m would be enough to strike a deal.

Tottenham also remain interested in Ryan Sessegnon of Fulham, with Pochettino said to be keen to complete a move before July 8.

While the Cottagers want around £45m for the 19-year-old, Spurs believe £25m is a fairer price for a player with just one year left on his contract. The Mail say a deal involving his twin brother Steven ‘has been discussed’.

With Max Aarons, rated at £15m, ‘being eyed as a replacement’ for Kieran Trippier, and midfielder Dani Ceballos ‘seen as a possible makeweight’ in any Real Madrid deal for Christian Eriksen, it will certainly be rather busy.

Spurs also plan to ‘increase their spending power’ by selling players, with Victor Wanyama and Eric Dier ‘among those for whom they are open to offers’.