Home F365 Says Tottenham find a way through without forward-thinking 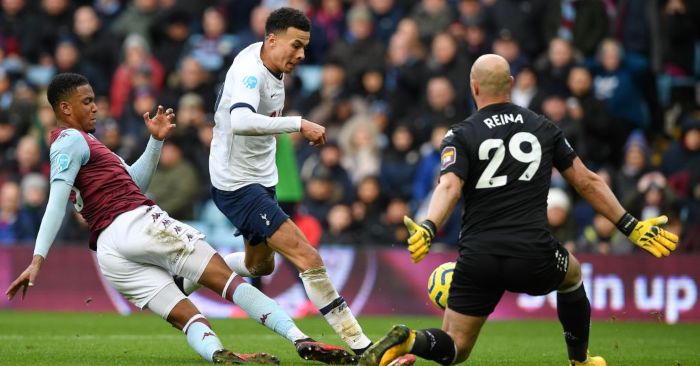 How frustrating for Jose Mourinho that Dele Alli’s brother infiltrated his Tottenham side at the exact same time as Son Heung-min’s lesser sibling and a man who has been awkwardly cosplaying as Lucas Moura ever since the Brazilian was lost in an Amsterdam haze in early May.

Had any of the three identity-theft victims made their way to Birmingham on Sunday – and had Pepe Reina not – Tottenham would have enjoyed a comfortable afternoon and a much more serene route towards the Premier League’s inaugural fifth-place trophy. The bar to the Champions League has been ostensibly lowered yet this is a side that sees a lack of obstacles as a challenge in itself.

Villa Park was host to more awkward one-on-ones than a company-wide redundancy consultation. Alli fumbled two; Steven Bergwijn wasted one; Son inexplicably saved his only moment of composure under pressure for the final minute of stoppage time. Tottenham scored three times but ought to have been out of sight long before the final whistle.

That is no criticism. There is plenty to be said for the volume and variation of the chances Tottenham created. For too long under Mauricio Pochettino a once vibrant attack had become stale. In the nascent reign of Mourinho it has often been one-dimensional and predictable. Here, aided by a troubled defence, it was impressive and pulsating.

And it worked. Just about. Son’s winning goal was a rare moment of clarity made all the more splendid by the chaotic and frenetic 90 minutes that had preceded it. A game that often felt as though it would be settled based on which of these two sides would run out of bullets first while shooting themselves in the foot was, in fact, decided by virtue of ruthless marksmanship. The one time everyone assumed Tottenham would miss their gilt-edged opportunity was the one time they scored.

It is the first time in over a year that Tottenham have won three consecutive Premier League games. Questions remain – Japhet Tanganga looks every bit as excellent as Toby Alderweireld does unreliable, Harry Winks was ineffective and Serge Aurier is still Serge Aurier – but tangible progress is being made.

That could still be undermined by January’s reluctance to sign a striker. Mourinho explained it as a desire “to do things not to resolve the problems of today or tomorrow but things that are also good for the future”. And this is not to say that signing Odion Ighalo on a short-term loan is ever the solution, just that Tottenham have set themselves up for a self-inflicted fall.

Scoring three goals from 23 shots is as wasteful as netting two from three against Manchester City was unstable. To flit between the two so seamlessly between games is an achievement in unpredictability. There is a happy medium to be found.

But there is plenty to be said for a side that looks, if not better without Harry Kane, then more of a profligate threat in his absence. If Tottenham can find a way of channelling this style and performance with an actual striker, they will be a genuine force.