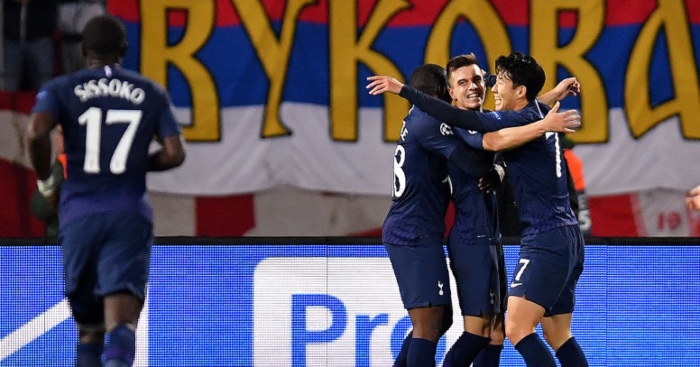 Suddenly, something different. Not just a winning Tottenham performance, but one achieved away from home and with splashes of flair.

The 4-0 victory over Red Star wasn’t without its flaws, but it was delivered with a freshness which lessened the relevance of those imperfections. Do you remember freshness? New ideas, new combinations, new life. New things to be talking about at full-time.

That’s what this was. Fundamental, of course, was the involvement of different players. Giovani Lo Celso made his first start for the club, operating in a midfield which also contained Tanguy Ndombele. Late in the game, with the points already won, Ryan Sessesgnon made his first properly substantive appearance after that cameo at Goodison Park, creating a late goal for Christian Eriksen.

It’s what many supporters have craved for some time. Not just winning football, but a game built on different imperatives and hinging on the skill and abilities of players who haven’t fully revealed themselves. A team is never more interesting that at the start of its growth phase, at the point at which it can still surprise and charm, and – naturally – never more unappealing than when it is has reached the end of its cycle, when there is no more evolution.

That’s a really underappreciated dynamic; there’s such energy in knowing that a team has potential. Thinking back to the start of Mauricio Pochettino’s first year at the club, when Tottenham showed their first shoots of life, that team’s magnetic qualities lay in its apparent desire to break its own boundaries.

It wasn’t even a particularly good side. It was unpolished, but that didn’t matter. What was important was its capacity to surprise – with, for instance, that unexpected resilience during the winter of 2014, shown in those late wins over Aston Villa, Hull City and in the glooom at Swansea, in the middle of that whipping rain. Or in that bullying of Chelsea on New Year’s Day 2015, in a powerful performance which appeared from nowhere to defy the heavy schedule.

Younger generations might disagree, but those are the most thrilling moments. Your team is your team, etcetera and so on, but there’s nothing quite as captivating as knowing that it’s fixing to run. That it’s about to do something.

And that’s something that this Spurs haven’t done for some time. What has been standing between this squad and its public is not the realisation that three or four members are eager to leave. Nor is it the bad start to the season, the losing, or the terrible form away from home which stretches back many, many months. It’s not that, it’s the realisation that this particular group is on its downslope and, at best, can only offer vague reminders of its old power.

In the old Championship Manager series, you used to receive a message after five or six years, after you’d won the league a few times. ‘The board are sad to see the fans’ enthusiasm for the team waning.’ It made you wonder what kind of philistines were pushing through your digital turnstiles.

What did that even mean?

This, maybe. Pochettino hasn’t won a trophy and there has been no tangible reward for his work, but this seems like the condition described – in which everything is just a bit tedious, when the senses are deadened to the winning and losing and when even major issues and moments of profound humiliation become lost within a heavy haze.

And the antidote to that is what Pochettino has been resisting. Maybe for good reason, Sessegnon and Lo Celso are both recovering from injury, but the effect has still been to prolong the ennui.

Christian Eriksen, by contrast, darkens the mood every time he takes the field.

Is anyone really upset by Eriksen’s desire for a fresh challenge? Some probably are, possibly aggrieved at his decision to make a private matter so public. In most cases though, at a guess, the fans are just sick of him. Not the person, but the component. They’re tired of hearing themselves complain about his corners and free-kicks. Bored of seeing him press the ball, but then allowing his opponent to drop a shoulder and skip away.

The premise of that criticism is unfair, because Eriksen was fundamental to what Tottenham were for so long. Nobody embodied the improvements Pochettino provoked with greater clarity than he did and, for about two-and-a-half years, nobody was a more critical omission from the Argentinian’s teamsheet. He was the team’s mind and, on some days, the sum total of its craft.

But that’s the danger of being so integral. If a player and a team are almost one then, inevitably, it becomes very difficult to separate them when things aren’t going so well. In this instance, Eriksen has become a symbol of everything that needs to change about Spurs.

For no better reason than there’s just nothing more to say about him. He’s never going to be better than he is right now. He’s never going to learn to do the things that he can’t. What, then, is the point in any sort of debate – what is the value in getting annoyed about any of it?

And that, more broadly, is Tottenham. They’ve been playing the same way, with the same dependencies, for such a long time that nobody need actually watch their games to know what they’ll be. They consist of all the same moves, with all the same players doing all the things that they’ve done many, many times before.

The joy of that performance in Belgrade, then, was the introduction of those different agents. Literally the players, but also the fresh air and novelty that their involvement brought. New moves, new decisions, new debates to be had and problems to solve.

Lo Celso, with those light feet and that set of knifing passes. There’s talent which can be applied in all kinds of ways. The sort which sparks in a way which might allow something to really catch light. He’s the kind of player who makes supporters count the days between games, whose every touch over the next six months will be an event.

And Ndombele, who shows a little more of himself every time he starts a game. Gradually, as his fitness develops and his confidence builds, the rainbow of his abilities becomes clearer. He’s got those passes. We knew that. But now we know he has that ball, too, and can beat players of both feet. On Saturday he’ll show something else, then something more the week after that. What will it look like when his current is pulsing across Pochettino’s circuits?

And those are the questions which teams need to be posing; that’s how they pique interest. Not by winning five games in a row or scoring goal after goal, but by presenting a different face. Football teams, like almost anything else that exists, are defined by the behaviours of their elements and the collisions between their particles. So: add something new, watch something different happen.

Pochettino has needed to alter this side’s chemistry for a very long time. Now that he has, it finally has a hint of life.