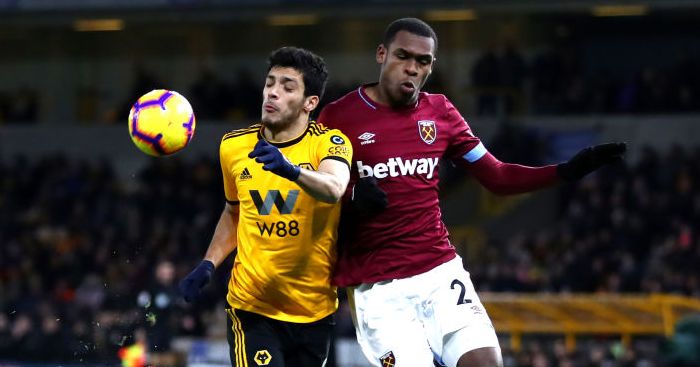 Tottenham will target Premier League pair Issa Diop and Raul Jimenez in a near-£100m swoop in the next transfer window.

In an effort to reinforce in defence and attack, West Ham centre-half Diop and Wolves striker Jimenez have been shortlisted by Jose Mourinho.

The Portuguese’s interest in Diop dates back at least as far as September 2018, when he described him as “a monster” after West Ham beat his Manchester United side 3-1.

Paul Scholes criticised Mourinho for that “massive dig” at the time but it seems as though the 57-year-old remains keen.

Foot Mercato claim Diop ‘has not escaped the notice of many people’, including those in north London. While that ‘has not yet materialised in an offer,’ Tottenham are ‘in constant contact’ with the player’s entourage.

Diop has gone as far as to discuss a possible move with friend Serge Aurier, with West Ham valuing him at around £52.9m.

Jimenez will also be pursued ‘regardless of the future of Harry Kane’, who Manchester United absolutely should not sign.

The forward is also wanted at Old Trafford but Mourinho ‘particularly appreciates’ Jimenez, whose representatives have again been in touch with Tottenham.

The report suggests that Jimenez would be available for as little as £44m, which seems incredibly unlikely since Wolves signed him permanently for £30m just 12 months ago.

Jimenez has scored more goals (13) than any Tottenham player so far this Premier League season, and although he turns 29 next month, he would be Mourinho’s ‘priority’ in terms of attacking signings.