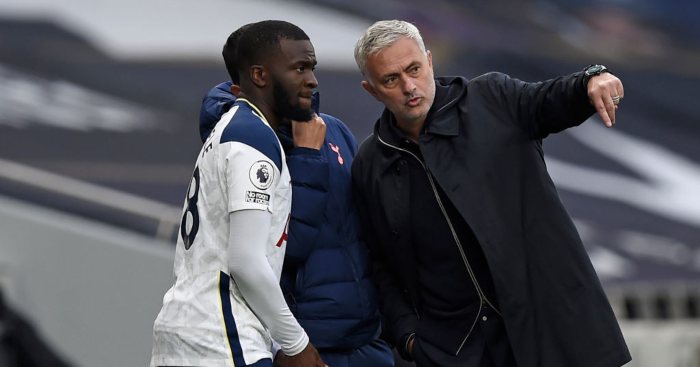 1) Will Mourinho’s conservative defensive shape stump Man City?
Many of the issues facing Pep Guardiola’s under-performing Man City side are likely to be exacerbated by Jose Mourinho’s tactics. For starters, an alarming passivity has taken hold in the City midfield as the metronomic Rodri and Ilkay Gungodan fail to provide impetus to their attacks. It has become increasingly easy for opponents to sit off City and, forming a defensive blockade surrounding the midfielders, cut off the passing lanes into the forwards.

This is what Roberto Firmino and Mohamed Salah did so well in Liverpool’s 1-1 draw with City before the international break, and it’s a method Mourinho will undoubtedly deploy. Against Manchester United earlier this season, Tottenham’s front five formed a pentagon around Fred and Scott McTominay, forcing Ole Gunnar Solskjaer’s team into aimless sideways passing and severely limiting the impact of Bruno Fernandes.

That’s the system Mourinho will use on Saturday, accentuating Man City’s creativity problems as the path into Kevin de Bruyne is cut off. Given that Spurs’ full-backs won’t get forward, stunting Riyad Mahrez and Ferran Torres, it is easy to imagine the hosts successfully forcing City into low-tempo, sideways possession.

2) Does a passive City midfield give Kane and Ndombele the counter-attacking advantage?
If that happens, then the visitors will probably get caught out on the counter-attack, their passivity in central midfield providing Harry Kane in particular with the chance to drop deep and run the game.

Rodri and Gundogan are just as much a problem off the ball as on it. City’s press has dropped remarkably this season, with less intensity from top to bottom allowing opponents to launch counter-attacks where before they would be hounded out at source. This, again, gives Spurs the advantage, with Ndombele wriggling through midfield to set up a breakaway and Kane dropping in between the City midfielders to create. Give Kane time to lift his head at your peril.

When Spurs win the ball back in their own half following a long period of aimless Man City possession, it will only take a few moves from Kane and Ndombele to outmanoeuvre an acquiescent central midfield and release Heung-min Son. Tottenham love to counter-attack behind high defensive lines. City’s is among the most vulnerable in the Premier League right now.

3) How can Guardiola configure his midfield to break through the blockade?
To avoid being stumped on the ball and outmanoeuvred off it, Guardiola needs to reconfigure that midfield; the 1-1 draw with Liverpool showed that Rodri and Gundogan don’t often work as a double pivot.

If Guardiola persists with these two in a 4-2-3-1 then City will be particularly vulnerable in the physical and psychological battle that Mourinho will attempt to force. Moussa Sissoko, Pierre-Emile Hojbjerg and Ndombele are playing with a warrior spirit of late and it is safe to assume they will win the majority of second balls in the middle of the park, out-thinking and out-running the visitors if Cit’’s rhythms are consistent with other Big Six games this season.

But perhaps Guardiola will pick Phil Foden and De Bruyne together, which would give the City defenders an extra vertical passing option through the middle, theoretically breaking up Mourinho’s compact shape. Guardiola might take a more direct approach and instruct his defenders to hit longer forward passes into the full-backs, bypassing the midfield altogether, which is the tactic that allowed them to get a foothold in the Liverpool game.

Certainly he will have been wounded by the 2-0 defeat to Mourinho’s Spurs back in February, and with Pep it’s always wise to expect the unexpected.

4) Can Man City force errors in flat-footed Spurs defence?
Tottenham continue to make unforced defensive errors this season, struggling to shake off the flaws that defined their final months under Mauricio Pochettino. The West Ham game in particular showed Spurs remain brittle, easily drawn into clumsy mistakes if the psychological warfare threatens to overwhelm them.

This is an issue that probably won’t go away considering Mourinho still favours powerful centre-backs who lack agility or good distribution under pressure. Consequently one can imagine Eric Dier getting caught flat-footed by the interplay between De Bruyne and Gabriel Jesus, or Toby Alderweireld under-hitting a pass that allows Man City’s high press to capitalise.

Should Guardiola find a way to get City camped in the Spurs half for any amount of time, errors may start to creep in.

5) Can Mendy and Torres exploit space behind Bale?
Ferran Torres enjoyed a superb international break, scoring a hat-trick in Spain’s 6-0 demolition of Germany on Wednesday, and with Raheem Sterling injured he is likely to start on the left wing. Assuming Guardiola takes the more attacking option of playing Benjamin Mendy at left-back, this gives Man City a good chance of piercing through Spurs down that flank.

Gareth Bale isn’t the most disciplined defensively and can struggle to understand how to follow his man, which may allow Mendy to create space on the overlap. This would overwhelm right-back Matt Doherty as he is squared up by Torres. With Torres cutting inside and Mendy holding the width, that is a potentially potent weapon in an area of the pitch Spurs can struggle. Doherty, only recently converted from wing-back to full-back, does not look entirely convincing.