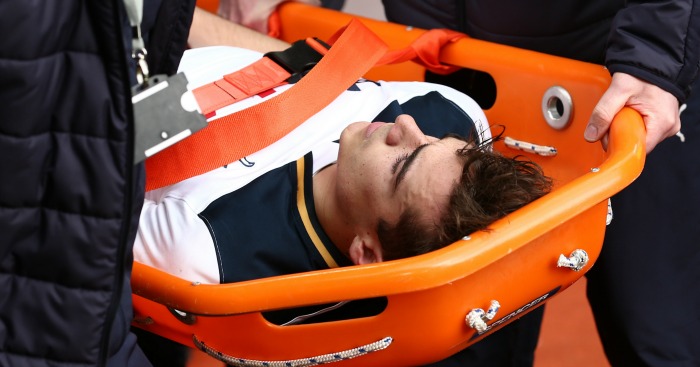 Tottenham midfielder Harry Winks will miss the rest of the season after sustaining ligament damage to his left ankle, the Premier League club has announced.

Winks collided with Burnley defender Stephen Ward during Spurs’ 2-0 victory at Turf Moor on Saturday and had to be carried off on a stretcher shortly before half-time.

The 21-year-old underwent a scan on Monday, with Tottenham confirming he will not play again this term.

“We can confirm that @HarryWinks sustained ligament damage to his left ankle during Saturday’s win at Burnley,” Tottenham said via their official Twitter account.

“@HarryWinks will continue to be monitored by our medical team during his recovery and will be unavailable for the remainder of the season.”

Winks’ absence will come as a blow to Tottenham, who are left relying on Victor Wanyama and Mousa Dembele in central midfield as they look to catch Chelsea in the title race.

Wanyama is struggling to shake off a back injury ahead of Wednesday’s game at Swansea and with Winks out, it means Eric Dier may have to be pushed out of defence.

Winks is the latest academy graduate to enjoy a breakthrough season at White Hart Lane, having made 33 appearances under Mauricio Pochettino, 21 of them in the league.

His dynamism and incisive passing had put him in contention for a regular starting spot and Pochettino said on Monday the youngster can grow into one of England’s finest midfielders.

“He was playing well and I’m sure in time would have been considered by Gareth Southgate,” Pochettino said.

“He is a very good prospect, a player who is dynamic and aggressive. He needs time to be consistent but in time he can be one of the best midfielders for England.”