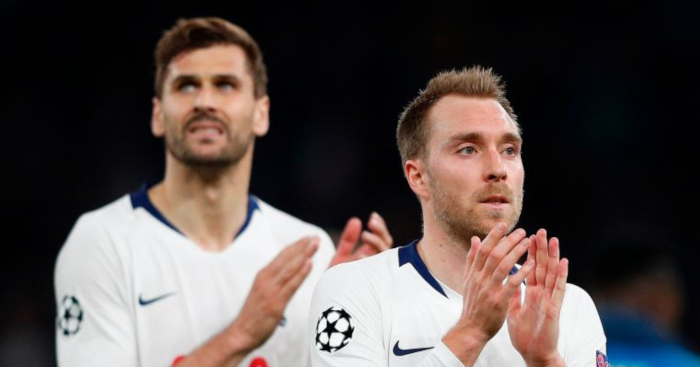 As Donny van de Beek was afforded the freedom of north London after latching on to Hakim Ziyech’s pass in the 15th minute, Mauricio Pochettino must have thought it could not get any worse. Hugo Lloris had no chance; Tottenham were behind, and their European journey was coming to a shuddering halt.

It was a goal Ajax had deserved ten times over. They had 71% possession in the opening quarter of an hour, taking four shots and a decisive lead that made a mockery of Manchester City’s cautious approach at this stadium in the previous round.

Erik Ten Hag had named the youngest side to start a Champions League semi-final (25 years, 216 days) since Borussia Dortmund (25 years, 102 days) in 2013. Jurgen Klopp’s team showed no signs of fear or pressure as they tore Real Madrid to shreds in that first leg six years ago, and it really did feel as though that 4-1 scoreline could be matched – or perhaps even surpassed – on Tuesday evening.

This was a Tottenham side shorn of their most effective midfielder, greatest striker and, towards the end of the first half, their best defender. Jan Vertonghen was substituted in the 39th minute after colliding with Toby Alderweireld in the 32nd, having attempted to return to the pitch by the 37th. It was distressing to see the Belgian struggle to even walk as he made way, the effects of concussion suddenly gripping him and providing a reminder of just how far football still needs to come in terms of its approach towards head injuries. That he was allowed to come back on, albeit briefly, is staggering.

The silver lining to that darkest cloud was that it allowed for Moussa Sissoko’s introduction and, with it, the foothold Tottenham had craved. Make no mistake: Ajax were breathtakingly brilliant for the majority of the first half, toying with their hosts with an unfathomable confidence and bravado. Van de Beek could have scored another, while Ziyech, Lasse Schone and David Neres all had chances.

Vertonghen’s injury was devastating, but it gave Pochettino a lifeline; an opportunity to right his many tactical wrongs. The Argentine clearly identified Ajax’s aerial ability as a potential weakness, starting Fernando Llorente with Kieran Trippier and Danny Rose providing width in front of a three-man defence. But the central midfield was painfully exposed and excised, with Victor Wanyama in particular drowning under a ferocious press.

This just in: Victor Wanyama, with his 55.6% pass accuracy, ain't Harry Winks.

Sissoko gave the hosts drive, bite, character and a purpose. Tottenham had as many shots in first-half stoppage-time as they did in the previous 45 minutes (2), the Frenchman whistling an effort just beyond Andre Onana’s post after Alderweireld’s looping header.

It was only after half-time that Tottenham played to their strengths, made the game more direct and physical and started to assert themselves. They had four shots to six and 41.3% possession in the first half, then eight shots to four and 60.2% possession in the second. A valuable draw was almost snatched from the jaws of a demoralising, damaging, deserved defeat.

Even in the blinding light of a fourth defeat in five games, Pochettino will gladly drink from a half-full glass. Tottenham were laboured, disjointed and embarrassed for almost half of this match, yet visit Amsterdam next week just one goal down. It spoke volumes that, chasing a result here, his last two substitutions in the final ten minutes were Juan Foyth and Ben Davies: this is a squad being stretched to its absolute limit, and Heung-min Son’s return from suspension could be crucial.

That may yet remain the same; Ajax are deserved favourites to progress, and Tottenham’s domestic form has deserted them. But after that chastening first-half experience, any sign of life is a bonus.