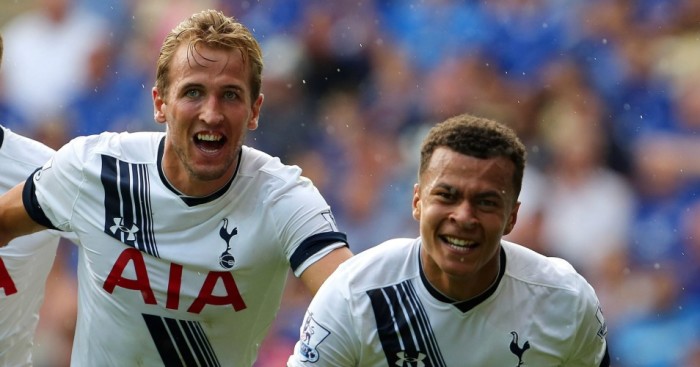 “I don’t want to joke about that, but there’s a lot of media interest in Liverpool, with Klopp, Mourinho – a difficult start in the league, it’s never happened with him. It’s different things and maybe for us it’s good” – Mauricio Pochettino, November 1.

Yet even by reasonable standards, Tottenham’s title bid has flown under the radar. They are the statutory third slot on Match of the Day, the forgotten member of the three/four/five/six/seven challengers. During a week in which Michael Carrick has talked up Manchester United’s title hopes, few at his old club are clambering up to the rooftops to shout.

In an age where bad news sells far better than good, there has only been room for one fairytale. Leicester have that written, published and at No. 1 in the bestseller list. The only question is where they rank on an imaginary (and ultimately meaningless) all-time fairytale achievement list.

When Spurs moved up to second by beating Watford last weekend, even those enthralled by the Premier League raised an eyebrow, as if Pochettino’s side had effected a bizarre overtaking technique. Quique Sanchez Flores may have described Spurs’ players as “animals”, but they are closer to the tortoise than the hare. Actually, they’ve simply got more points than 18 other clubs, and have lost only twice since the opening day.

Not that Tottenham’s manager minds the understated nature of this title challenge. “It is better not to speak too much, only to show, to work hard,” Pochettino says. “This is the better way to show we are ready to compete and after, we see what happens.” Pure Pochettino, the perfect quiet man for quiet improvement.

Pochettino has his own explanation for the lack of frenzy: “For me, historically Tottenham is one of the biggest clubs in England. It is not a surprise we are in a good position.”

Yet that assessment is misleading, whether wilfully or otherwise. Until 2006, Tottenham had never finished in the top six of the Premier League. It is 55 years since they won the Championbship, and 53 since they finished in the top two. Twelve clubs have won the league since Tottenham in 1961: Ipswich Town, Everton, Liverpool, Manchester United, Manchester City, Leeds, Arsenal, Derby County, Nottingham Forest, Aston Villa, Blackburn Rovers, Chelsea.

By every measure other than in comparison with Leicester, Tottenham’s title bid is remarkable. Their commercial income is just over half that of Liverpool, Chelsea and Arsenal, and far less still than the two Manchester clubs. Their wage bill of £100m for 2014/15 was far lower than Arsenal (£192m), City (£194m), United (£204m) and Chelsea (£215m), and also £44m lower than Liverpool’s. The gap between Tottenham and Hull City in 18th in that salary ranking was the same as between Tottenham in sixth and Liverpool in fifth.

It goes beyond wages. Since June 2013, only one current Premier League club has made a profit on transfers: Tottenham. While selling Gareth Bale obviously distorts that statistic, it only underlines Pochettino’s recovery work. Across north London they might tell you to talk about net spend, fella, but at White Hart Lane actions speak louder than words.

On the field, Tottenham are enjoying the exuberance of youth without dwelling on the comparative lack of experience. Of the 14 players used against Watford on Saturday, nine were aged 23 or under. According to the excellent transfermarkt.co.uk, with an average age of just 24.6, Pochettino is in charge of the youngest squad in Europe’s top five leagues. This is over-performance, achieved well ahead of schedule.

Yet while Tottenham’s improvement is notable, it is not sexy. There is no stand-out player in the mould of Mesut Ozil, Sergio Aguero or Jamyad Vardrez, rather a number of exciting yet reliable parts combining to create a greater sum. The rise of Dele Alli has taken the pressure off Harry Kane, around whom the hysteria has mercifully abated. Kane has more league goals during this season than at this stage of last.

Instead, it is the rapid improvement in Tottenham’s defence that is the backbone to their title bid. Last season, they ranked 16th in the Premier League for goals conceded (53, more than relegated Hull City). The following is a list of teams in Europe’s top five leagues with a better goals conceded per game ratio in 2015/16: Bayern Munich, Juventus, Paris Saint-Germain, Atletico Madrid.

Tottenham ended last season having had 171 shots on target, allowing the same amount on their own goal. They were on the level, every strength counteracted by a weakness. This season, that same scoreline now reads 167-75. Pochettino has achieved three years’ work in 12 months.

Pochettino’s side face a test of their credentials at Manchester City on Sunday, and must soon balance participation in three different competitions with a smallish squad. But after Sunday they must play only one of the top eight away from home, and have now won six straight matches. Spurs really can do this.

There is nothing wrong with avoiding media scrutiny. In fact in a post-Bale, post-’Arry era, Tottenham have welcomed their time away from the spotlight’s glare. Reflection stops us going blindly along the path. Plaudits are fine until you start to believe them.

Yet it would be remiss not to appreciate what an extraordinary season this is for Tottenham, and they do not need to win the league to make that so. While everybody understandably marvels at Leicester, pokes fun at Manchester United and Chelsea and anticipates Pep Guardiola, there is a silent revolution going on at White Hart Lane.