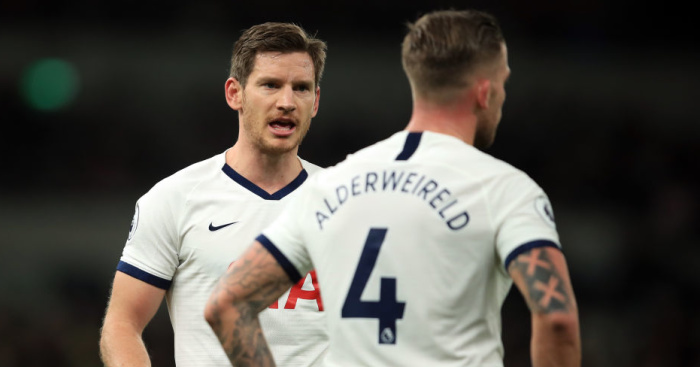 Tottenham could be set to do further business with Inter Milan with a pair of defenders potentially swapping clubs, according to an Italian report.

The two clubs found common ground in the last window when the Serie A powerhouse agreed a £17m fee to secure the signature of Danish playmaker Christian Eriksen.

Under Antonio Conte, Inter have gathered a plethora of former Premier League talent, with Eriksen joining the likes of Romelu Lukaku and Ashley Young, as well as loan signings Alexis Sanchez and Victor Moses.

Now, the latest report from Italian publication Calciomercato suggests that Jan Vertonghen could be the latest Premier League star to join the Nerazzurri, but with an Inter star moving in the opposite direction.

The outlet state that former Atletico Madrid stalwart Diego Godin could move the other way, with Inter reportedly open to his exit to shift the remaining €12m of salary owed over the next two years.

Belgian Vertonghen has been a capable performer at White Hart Lane, but appears set for a new challenge with his contract expiring in the summer.

Ajax have been credited with interest in bringing their former academy graduate back to Amsterdam, but Inter have appeared to be leading the race for his signature over the previous months.

Godin was a standout performer for many a year under Diego Simeone at Atleti, but since his move to the San Siro in the summer, has struggled to adapt to Conte’s three centre-back system.

The Calciomercato report speculates that a return to the more structured four at the back under traditionally defensive Mourinho would suit Godin, though at 34, would only represent a short-term solution to the Tottenham defensive woes.