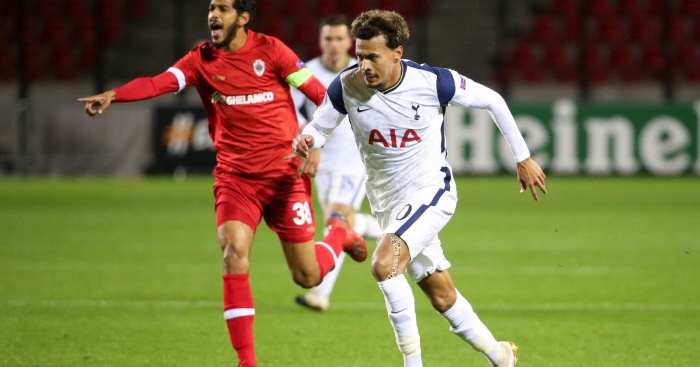 Tottenham have been told to loan out Dele Alli in the January transfer window by former striker Clive Allen.

Alli has had a troublesome start to the campaign under boss Jose Mourinho.

He was subbed off recently as Spurs lost in the Europa League to Royal Antwerp.

And now Allen has told Spurs officials to consider loaning the England international out so he can rediscover his form.

Speaking on Talksport, the former striker said: “If Spurs are clever they might well loan him to a team where he could start to find form, which he needs, because he’s desperately short of confidence.

“He was very sloppy. I think he probably has to move away from Spurs for a while to try and rediscover the doubted talent he has.”

Alli was brought off by Mourinho after just 45 minutes as the team looked lacklustre. It’s the second time this season that he’s been brought off before the second half begins.

Alli’s place is also under threat from the host of attacking options that Mourinho has.

Deadly duo Harry Kane and Heung-Min Son are undoubtedly the first names on the team sheet.

They can also call upon Steven Bergwijn, Gareth Bale and Carlos Vinicius.

24-year-old Alli has featured in just two Prem games so far and could now be on his way out of North London.

Real Madrid and PSG have previously been linked with the player, although they’re unlikely to pursue a deal given his current form.

A loan deal to the likes of Sevilla in Spain, or someone of that calibre, could prove effective to get him away from the limelight.

Spurs’ next fixture is at home against Brighton on Sunday. They’ll be hoping to bounce back from their European loss with a big win to push them up the table.