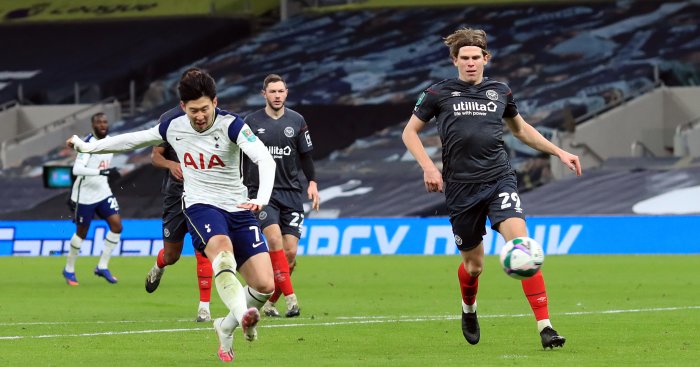 A largely routine 2-0 win for Tottenham over Brentford went much as you’d expect, confirming both Spurs’ place against one of the Manchester clubs in April’s Carabao Cup final but also that the Bees are already significantly better than a number of current Premier League clubs and would present a most welcome addition to the top flight.

They’d already shown as much for most of last season and in beating four Premier League clubs along their way to their first major cup semi-final but even in defeat at White Hart Lane were far from disgraced. They may, if anything, slightly rue a slight passivity and lack of adventurousness in their play against a Spurs defence that didn’t look entirely solid. But it’s nit-picking, really, especially as there were a couple of other reasons for it. One, they were rightly afeared of a full-strength Spurs side’s counterattacking potency and two, they’d correctly targeted set-pieces as their likeliest means of exposing any weakness in the Spurs defence.

It looked to have worked before, in another taster of what Brentford can expect when (I know they’re currently fourth but surely not if) they get promoted to the Premier League as an apparent equaliser from the impressive Ivan Toney was chalked out after VAR determined his kneecap was offside. Five minutes after thinking they’d made it 1-1, Brentford found themselves 2-0 down after fatally allowing Heung-Min Son to find himself one-on-one with the keeper. The consequences to such an event have this season become almost inevitable.

So unerring is Son’s otherworldly reliability when faced only with the opposing keeper that even a win-at-all-costs sort of chap like Jose Mourinho has rightly decided it basically amounts to cheating and, since the thrashing of Southampton, decreed that Spurs may use the tactic at most once per game.

The trademark early Spurs goal was also a thing of some beauty, Sergio Reguilon climbing off the naughty step to curl in a cross more delicious than any Portuguese piglet. So good was the delivery that a goal still seemed inevitable even after you realised it was Moussa Sissoko’s head it was spinning unerringly towards. In fairness to a man without a goal since December 2019, the run and header were both of the first order. And it set things up for Spurs to do their thing.

Ah yes, Spurs. Familiar old Spurs. Score an early goal. Don’t score a second one for an extended period of time. Concede an equaliser. This was so nearly that all-too-familiar script. It would be harsh, though, to pigeonhole this game with Newcastle or Palace or Wolves. Spurs looked for the second goal, but to Brentford’s credit found it hard to come by. Harry Kane was largely kept quiet and Brentford were growing in confidence even before their disallowed goal. Mourinho was right to deploy the Son one-on-one joker when he did. It’s why he’s won so many trophies.

And he knows how important that is. He wasn’t joking when he called this his biggest game as Spurs manager. The final will supersede it, of course, and this is a competition that has been good to Jose Mourinho and he to it. He knows Spurs need to win something – anything – and this will very much do. Spurs will quite rightly fear neither of their potential opponents on their return to the familiar sights of Wembley in three-and-a-half months’ time. Water has passed under the bridge since they played United and City in the league, but Spurs won those games by a combined 8-1 margin and were good value for it.

Spurs have had a funny run to this final. It’s not quite fallen in their lap, but a forfeit and a pair of lower-league opponents makes for a generous route to potential silverware even if they did also have to take care of Chelsea at a busy time and face further potential fixture pile-up around the final.

It means another Premier League will have to be rearranged and, with last week’s Fulham game to squeeze in around Europa League and FA Cup commitments before a hard deadline in May it might get tricky. By a happy quirk of fate, the game that falls foul of the Carabao final is the reverse fixture against Fulham. The two games should absolutely be combined into the Premier Leagues first actual genuine six-pointer at a neutral ground. What a spectacle that would be.

Will never happen, but Spurs against a Manchester club at Wembley for a big shiny pot definitely will. It should be decent.