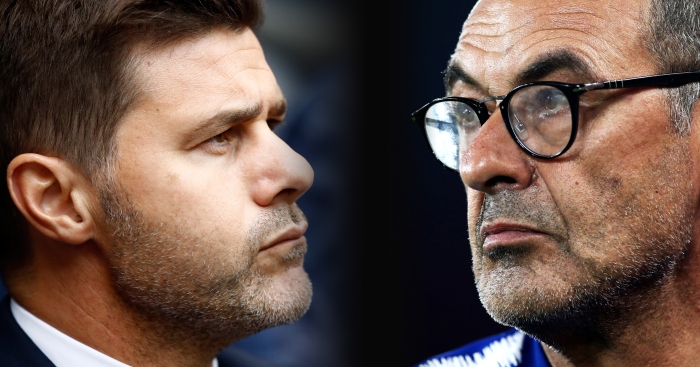 London derbies don’t get much bigger than this, not in late November anyway. Tottenham Hotspur and Chelsea, separated by just one point, can truly enter the Premier League title race with a victory at Wembley on Saturday. Tricky away ties for Manchester City and Liverpool at West Ham and Watford respectively may open up a window of opportunity for the two outsiders. Defeat would all but end their hopes.

Here are five tactical questions ahead of Tottenham v Chelsea on Saturday evening:

1) Will a claustrophobic central midfield create a dull game?
Matches between the Premier League’s biggest clubs are often dry. This is because (Manchester United aside) the top six combine a high defensive line and high pressing with cautious attacking to create a congested central midfield. Tottenham’s 1-0 defeat to Man City was a good example of how disciplined football – all bunched into the central third of the pitch – doesn’t leave much space for incisive attacking interplay.

Chelsea’s big-six games have been lively, and yet as Maurizio Sarri’s defensive players improve their understanding of his system, they too are showing greater cautious control in important games. No longer are Marcus Alonso or Cesar Azpilicueta finding themselves caught between their new full-back instructions and the muscle memory of two years under Antonio Conte.

The up side to a potentially suffocating tactical chess match on Saturday is that – as Gary Neville might say – the game could be reduced to key individual battles. From Eden Hazard versus Eric Dier to Serge Aurier versus Alonso, there are some tasty head-to-heads for us to analyse.

2) Can Spurs copy Everton’s method of restricting Jorginho’s influence?
Marco Silva provided a blueprint for Chelsea’s future opponents a fortnight ago when his Everton side kept a deserved clean sheet at Stamford Bridge. He sat Gylfi Sigurdsson on top of Jorginho throughout the 90 minutes, forcing Chelsea’s centre-backs to find an alternative pass; the Italian only managed 50 passes, down from an average of 103, while Sigurdsson completed five tackles and three interceptions.

Marco Silva answered my question, he said that "you didn't see" Jorginho today because of the Richarlison and Sigurdsson dropping in on him. He describes him as the key to the system. Seemed to insunuate more than Hazard. #CFC #CHEEVE

As a direct consequence the visitors were stunted. Without their metronome Sarri’s predictable attacking line – Jorginho to Mateo Kovacic to Hazard – was cut off at source, leaving his centre-backs to either attempt long balls into the forwards (which obviously didn’t work) or feed N’Golo Kante, dropping deeper to receive possession than Kovacic on the other side. Kante doesn’t possess the technical quality needed to turn on the ball and break the opposition lines, which explains why such a simple Silva trick had such a big impact.

Pochettino will surely follow suit, instructing Dele Alli to follow Jorginho during periods of Chelsea possession. Dele has the intelligence and work-rate to be successful.

3) Can Kane and Eriksen shine against Chelsea’s soft centre?
Chelsea’s biggest weakness is their lack of a defensive midfielder (or rather, Sarri’s insistence on playing the world’s best defensive midfielder out of position). This isn’t a problem against smaller teams – Chelsea dominate possession and counter-press superbly – but sharper rivals have already learnt how to pierce that soft centre. The Blues have conceded eight goals from five matches in all competitions against fellow ‘Big Six’ sides.

Only Watford attack through the centre of the pitch more frequently than Spurs (28%), whose reliance on Harry Kane dropping off has increased dramatically this season as Pochettino’s side struggle for fluency. Kane will expect to find space around Jorginho, but more importantly Christian Eriksen is back from injury. The 26-year-old played 135 minutes for Denmark during the international break and is in line to start at Wembley this weekend.

For the first time under Pochettino the attacking players don't pick themselves in the starting 11. We could start any 3 of Son, Lamela, Lucas, Dele and Eriksen on Saturday and not really lose too much quality. Haven't been able to say that in previous seasons. #coys #thfc

Crystal Palace’s goal against Chelsea at the beginning of the month, the last the Blues conceded in the Premier League, was a direct consequence of a gaping hole in the middle; James McArthur had all the time in the world to play a through ball into Andros Townsend. A similar move involving Eriksen to Kane should be fruitful.

4) Could Aurier versus Alonso earn Spurs crucial set-pieces?
Both Chelsea and Spurs like to narrow the pitch, which in theory means space on the flanks for two sets of marauding full-backs to battle it out; if the match is a little stodgy, Aurier v Alonso could be a decisive head-to-head (Cesar Azpilicueta stays deeper during Chelsea attacks, meaning the Spaniard and Ben Davies will be fairly quiet).

Aurier is still returning to full fitness but will replace the injured Kieran Trippier at Wembley, adding a pace and power that could prove too much for Alonso. Chelsea’s left-back can be guilty of wandering off, failing to track runners into the channel.

A right-sided defence of Foyth & Aurier(?) vs Hazard & Alonso this weekend… Big test for both. https://t.co/gQH4jsXxc3

Should Aurier see enough of the ball, he will most likely earn plenty of set-pieces for the hosts as Alonso scrambles back to tackle the Ivorian. Spurs have scored eight goals from set-pieces this season, more than any other Premier League club. This dead-ball specialty, likely to increase now Eriksen is back, explains how Pochettino’s side keep winning matches despite not playing particularly well.

5) Who will Pochettino pick to stop Eden Hazard from cutting inside?
Hazard has scored seven goals and assisted four more in just eight Premier League starts thanks to Sarri’s expressive tactics freeing the Belgian in the final third. It’s pretty easy to highlight which player is most likely to cause Spurs damage, but not so easy to decide who should be tasked with tracking him.

Hazard’s propensity to drift infield from the left – and attack the penalty area diagonally – makes the opposition’s right-sided central midfielder the most important stopper. Only three English clubs have stopped Hazard from scoring or assisting this season: West Ham managed it in a 0-0 draw by cowering in a defensive shell (which Spurs won’t do); Man Utd stopped him through sheer luck (Hazard completed six key passes); and Everton did it thanks to Sigurdsson on Jorginho – and Idrissa Gueye.

Gueye’s athleticism meant he could keep track of Hazard’s darts and feints. The Senegal international, probably the most under-rated player in the Premier League, had the acceleration, agility, and reactions to stamp out Hazard’s authority. It’s hard to see which Spurs player can do that.

Moussa Sissoko is probably Pochettino’s best option, although the Frenchman is prone to lapses in concentration. Eric Dier is most frequently deployed to the right, but he is surely too flat-footed for such a difficult task. Poch certainly has a selection headache.