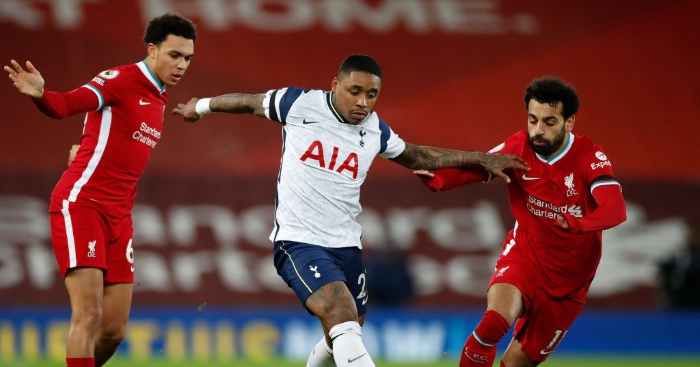 It’s Tottenham v Liverpool with Spurs looking for a first win over the champions in over three years. This feels as good a time as any to make it happen. Let’s look at the tactics; we have five big questions…

1) Why have Liverpool’s goals dried up?
The biggest reason behind Liverpool’s slump in form is the injuries to their centre-backs Virgil van Dijk and Joe Gomez – which may seem counterintuitive considering Jurgen Klopp’s problem is scoring goals, not conceding them – but with Fabinho and Jordan Henderson (injured for Thursday’s game) forced into the defensive line, Klopp has lost the two midfielders most responsible for sustaining pressure on the opposition goal.

Liverpool always won by tight margins; by throwing wave after wave of attack until weary opposition legs eventually gave in. Without Henderson setting the tempo and probing for space, Liverpool are less able to force the opposition into retreat and without Fabinho screening against the counter-attack, they cannot pen teams in. As a result, games are more territorially even and begin to drift.

Worse still, when that happens, both full-backs are pushed back and are no longer able to camp in the final third. Liverpool’s attacks lose their variety without a constant outlet on the flanks, because opponents then find it easier to simply stay narrow and negate the front three. Klopp’s system is built on presenting the opponent with a riddle: tuck in and our full-backs will hurt you out wide, but come out wide and the forwards will tuck in and flourish. When one of these attacking variables diminishes Liverpool become too predictable.

Finding an answer isn’t easy. Rhys Williams’ error in the FA Cup showed why Klopp isn’t willing to move Fabinho back into midfield, and for the trip to Tottenham – who will hold a midblock and look to prevent Liverpool from playing – the goalscoring touch that came back at Old Trafford will probably disappear again.

The answer might be Xherdan Shaqiri, but we’ll get to that in point five…

2) Will Kane flourish in weakened Liverpool midfield?
The more immediate concern for Klopp is how to stop Harry Kane from dominating. The Spurs number 10 loves to drop off the front line and pick the ball up between the lines, looking for a clever pass over the top of the opposition defence for his strike partner Heung-Min Son. It’s probably the most famous tactical play in the Premier League right now, but that doesn’t mean any manager has worked out how to stop it.

Liverpool are particularly vulnerable without Fabinho here to mop up and get tight to Kane. With Thiago (their deepest midfielder on Thursday) more of a playmaker than a defensive player, Kane will definitely expect to win the physical challenge and find space on the blind side of the Liverpool midfield.

This feature of the game is only likely to increase if the game goes on at 0-0, a result that largely suits Jose Mourinho but isn’t good enough for Klopp. As his team push further forward, Kane could become the match-winner.

3) Does the need for TAA to get forward hand Son the advantage?
Tottenham came very close to getting in behind Liverpool on numerous occasions in the 2-1 defeat back in December but fell just short with a slightly wayward pass; the ball was on, though, and the game was tense with potential one-on-ones. Judging by how Manchester United got in behind in the FA Cup game on Sunday, Mourinho can learn a thing or two about how to ensure Spurs don’t again fall just short.

The trick is to hit longer passes earlier. Southampton were the first team to notice Fabinho finds it hard having to turn and sprint backwards, with Ralph Haenhuttl instructing Saints to pump it over the top again and again – even doing so from a quick free-kick in the first half, from which Danny Ings scored the winner.

Manchester United built on this with a similarly direct approach, hence the goals for Mason Greenwood and Marcus Rashford, who found each other with raking through balls past the Liverpool back four. If Spurs are to repeat this model then clearly they need to aim down their left wing, where Son will look to get in behind Trent Alexander-Arnold.

TAA isn’t in the best of form, and when confidence is low you are more likely to make minor positional errors. He could be guilty of trying too hard in the opposition half, leaving a gaping hole for Son to make runs in behind.

4) Can Thiago create wide overloads in a repeat of Anfield victory?
The game at Anfield in December was won thanks to a tactical error from Mourinho. Lining up in a flat 4-4-2, he instructed his wingers to play as auxiliary full-backs to create an ultra-narrow 6-2-2 on the assumption that Liverpool would not want to build through the centre of the pitch. He was only partially right (Curtis Jones’s one-twos through the centre did hurt Spurs’ two-man resistance), because in fact the unfamiliarity of the system proved Tottenham’s undoing on the flanks.

Predicting Spurs’ forwards would look to block passing options through midfield, Jordan Henderson dropped deeper than usual to get on the ball and clip passes out to the left flank. From here, Sadio Mane, Andrew Robertson and Curtis Jones interacted cleverly to overwhelm Moussa Sissoko and Serge Aurier.

In short, Sissoko isn’t used to playing at right-back, meaning he often lost his runner or got confused by the volume of bodies. Liverpool dominated through the middle and out wide, and while Spurs improved with a reshuffle in the second half the damage was done. Thiago will be the deep-lying playmaker this time round. His distribution into the wide areas will be crucial.

5) How will Liverpool’s front three cope with Mourinho’s dropping centre-mids?
Or perhaps not. Mourinho probably won’t try the same system again, especially because Tottenham will expect to hold more of the ball than at Anfield. More likely he will plump for a 4-2-3-1 formation with Tanguy Ndombele, Sissoko and Pierre-Emile Hojbjerg in central midfield, with two of these dropping to create the back six by slotting in between the centre-back and full-back.

It’s a tweak of the usual back six that Mourinho has tried on several occasions this season, and certainly on paper seems like the most effective way to shut down those channels between centre-back and full-back where Salah and Mane like to play. With neither of Liverpool’s wide forwards in their groove, and with Roberto Firmino’s return to form potentially halted by the compression between the Spurs lines, Klopp’s side could struggle to create.

That’s where Shaqiri comes in. For the first half-hour in the 0-0 draw with Man Utd, in which Ole Gunnar Solskjaer was as conservative as Mourinho will be, Shaqiri took up good positions to the right of central midfield. He was able to get on the ball largely because Firmino, dropping deep, meant Liverpool outnumbered United in central midfield. The advantage soon died down, however.

At Spurs, if the central midfielders are indeed expected to drop into the back line then Shaqiri can again find room to try to unpick the lock.