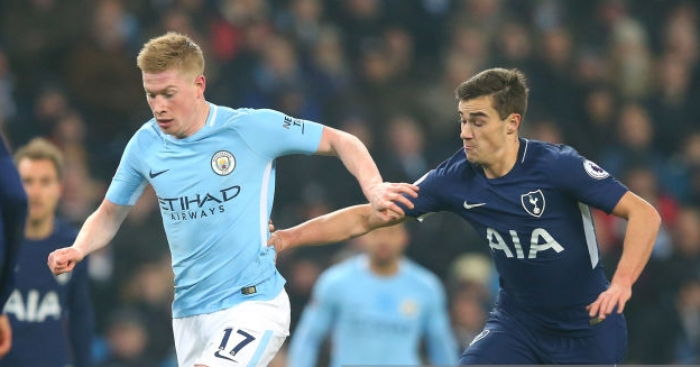 Perhaps we all got a little bit carried away. The thought of Jurgen Klopp’s Liverpool overthrowing the current champions was an irresistible one, but it’s probably romanticism obscuring cold, hard logic. Manchester City’s 5-0 victory over Burnley last weekend was pretty much immaculate, and for the umpteenth time this season Pep Guardiola changed his tactical approach to devastating effect. Burnley are happy to concede lots of long shots? Fine. We’ll spend the week practicing our screamers.

Tottenham Hotspur can expect another calculated battle plan on Monday night, with Guardiola able to draw upon a seemingly limitless number of options. City can go long, build gradually through the middle, pepper the box with crosses, counter-attack with ruthless speed or, yes, just curl shots into the top corner from 25 yards.

1) Will De Bruyne and Silva take advantage of slow-starting Spurs’ disconnected lines?
Pochettino’s biggest issue at the moment is a flat-footedness in central midfield that stems from sluggish starts and a disconnect between the defensive and midfield lines. Whatever the central combination, Spurs take an age to find their rhythm, and it doesn’t help that Mousa Dembele, Moussa Sissoko, Eric Dier and Christian Eriksen are all slow on the turn. Unless Pochettino’s starting 11 are compact and pressing together, the individuals in the middle of the park tend to lose their battles.

If it was a problem against PSV – and Spurs didn’t show up in the first half – then it’ll be a problem against Kevin de Bruyne and David Silva. We all know by now how these two operate: shuttling up and down in the half-spaces (the vertical columns that fall between right-back and centre-back); they run the game unless opponents can somehow cover the width of the pitch.

In last April’s 3-1 defeat of Tottenham, City easily found De Bruyne and Silva thanks to Fabian Delph’s positioning as an inverted full-back. Spurs pressed high, but with Delph creating an extra man they simply couldn’t shut down all their passing lanes. Delph won’t feature on Monday, but City do find Spurs in a rough patch (in terms of performances, if not results). It’s hard to imagine Dier and Dembele showing the requisite energy or positional awareness needed to squeeze out the Premier League’s best midfield partnership.

Asking @ManCity fans how does it feel to have Kevin De Bruyne back… pic.twitter.com/OVcUj51maw

2) If Spurs get a foothold, will City take a more direct approach via Mahrez?
If Spurs race out of the blocks, forming a cohesive pressing unit from the outset, then Guardiola will most likely instruct his players to hit long balls over the top of the defence. This is how he reacted to Tottenham pushing up the pitch for the second half of that 3-1 win – directly leading to two goals – and it’s a tactical approach that has improved since Riyad Mahrez became a regular.

Guardiola attempted a more direct style in the 0-0 draw with Liverpool, in which City finished with an 83% pass accuracy (down from a 91% average this season) and the back four attempted 23 long passes. Mahrez himself played seven, most of which were crossfield, reflecting City’s unusual urgency to reach the final third. Liverpool’s surprising conservatism at Anfield stopped it working, but Spurs are likely to be a little more accommodating. Barcelona cut through them during the first half at Wembley with long vertical passes.

With Riyad Mahrez flitting between the lines, Man City’s Leicester-esque sweeping diagonals might catch out a Spurs side expecting something entirely different from the champions.

3) Can Lucas and Son counter into the space behind Mendy and Walker?
Pochettino has begun regularly starting his two fastest wide men, Lucas Moura and Heung-min Son, together against their direct rivals. Counter-attacking has become a bigger feature of Tottenham’s game ever since that 3-1 victory over Real Madrid in November last year. Quick distribution to these two is surely Spurs’ best chance of scoring a goal, particularly on Benjamin Mendy’s side.

It is no secret that Mendy’s attacking play is considerably better than his defensive positioning, with Fernandinho frequently needing to cover the left flank this season. In big games Guardiola tends to instruct Kyle Walker to stay deep and tuck in, forming a back three that allows Mendy to advance as Aymeric Laporte becomes a temporary left-back. This will probably continue, but if Son and Lucas start together then the visitors have a problem to solve.

The nightmare scenario for Guardiola is a three-on-three developing as Harry Kane drops off to receive the ball, before spraying it out wide and launching a counter-attack. So far this season, Man City have been immaculate at preventing breakaways, but they haven’t really been tested yet. Liverpool’s hesitancy suggested fear might have smothered the bravery needed to expose City.

4) Will Mendy and Sane overwhelm Spurs’ understocked right flank?
There’s a narrowness to Pochettino’s defensive structure that can leave them a little light on the flanks, and on Monday night Kieran Trippier may struggle without a right winger in front of him; Benjamin Mendy and Leroy Sane might be the most devastating combination in Europe in terms of pure attacking threat.

With two goals and two assists in his last four starts, Sane – left on the bench for a trip to Shakhtar in which several key players were rested – is likely to start on the left. His directness on that flank is an important outlet for City, who tend to slowly build down the right, drawing their opponents across, before quickly switching to leave Sane with a one-on-one against the right-back. Trippier could get overwhelmed, and that’s before considering Mendy’s impact.

The Frenchman’s crossing has given City a whole new dimension in attack. Mendy is top of the Premier League assist chart with five in just six games. It’ll be up to the hard-working Sissoko to come across and help Trippier out.

Lucas Moura (9) and Harry Kane (9) have created more chances that have resulted in a shot on-target than any other #thfc players in the Premier League this season. pic.twitter.com/LvYCcXF7UO

5) Can Trippier and Alli combine to hit the slightest chink in City’s armour?
If there is a flaw in this Man City team (and there really isn’t), then it’s defending crosses. Four of the six goals they have conceded this season in all competitions have been crosses (if you include a long throw against Huddersfield). This is a continuation of a slight problem that emerged towards the end of 2017/18, when clipped balls to the back post led to key chances in big matches.

Dele Alli should be fit to return on Monday, and the England international is superb at ghosting into space between opposition defenders to win headers in the penalty area. Trippier’s delivery will be crucial then, although this situation is unlikely to occur unless Spurs are competitive in midfield. A lot rests on the performance of Harry Winks, whose elegance in possession will be needed for Spurs to evade Man City’s press.

It’s a lot to ask of a young player who has only just recovered from serious injury, but that’s to be expected. Every Spurs player will need to be at the absolute peak of their game to avoid defeat, never mind secure a famous home win.