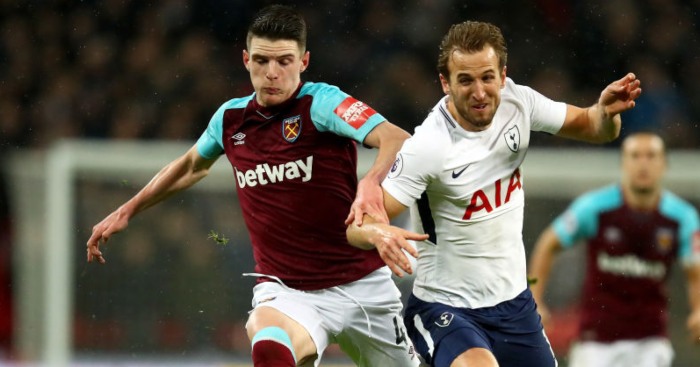 Tottenham v West Ham is Sunday tea-time fare. And it will be fascinating because West Ham won’t play into Tottenham’s hands…

This is a test of just how far Tottenham Hotspur can go this season. Jose Mourinho teams tend to play well when allowed to sit back a bit and hit on the break – hence thrashing Southampton and Manchester United – but struggle when up against a deep defence. Mourinho doesn’t coach attacking patterns, instead hoping his forwards will improvise on the break. That sort of thing doesn’t cut it against a defensive shell like West Ham’s.

This game will be attack versus defence; Spurs huffing and puffing at a low tempo with the ball as West Ham patiently wait for opportunities to break down the flanks via Jarrod Bowen and Michail Antonio. In other words, it should look a lot like Tottenham’s laborious 1-1 draw with Newcastle.

The most important area of the pitch from a Spurs perspective is the space around Declan Rice, the West Ham holding midfielder who will be tasked with keeping an eye on Harry Kane as he drops in to link the play. Moyes’ side won’t be able to camp in their own third for literally the whole game, and in those moments when things become a little stretched it is vital Rice is alert to the threat of Kane picking up the ball and feeding Son.

West Ham will predominantly lean down their left flank through Aaron Cresswell, who assisted twice against Leicester City, and Arthur Masuaku – particularly given Serge Aurier is clearly Tottenham’s weak link. Mourinho is likely to select Aurier for his attacking qualities against such a defensive side, but this could leave them open at the other end.

Tanguy Ndombele is finally starting to look like the player Spurs thought they were signing, his wriggling runs through midfield providing the sort of thrust they have lacked since Mousa Dembele was in his prime. Mourinho’s reliance on a counter-attacking style requires someone like Ndombele to open up space out of nowhere, particularly while Giovani Lo Celso is injured.

The Frenchman’s line-breaking playing style is just what Spurs need to pull West Ham’s banks of four out of shape.

One to watch… Gareth Bale

It looks like Gareth Bale is ready to make his debut after resuming full training during the international break. The 31-year-old is obviously a hugely exciting acquisition for Tottenham, and yet it isn’t exactly clear where he will fit into the side; compared to Mourinho’s normal preferences for wingers, Bale isn’t necessarily quick enough and doesn’t work hard enough.

Nevertheless Bale gives Spurs an extra dimension and creative quality they have been missing without Christian Eriksen. Coming off the bench, Bale could have a real impact if this game is heading towards a dull, low-scoring draw. Why not put a bet on…
Bale being the last goalscorer at 7/2 (Betfair)