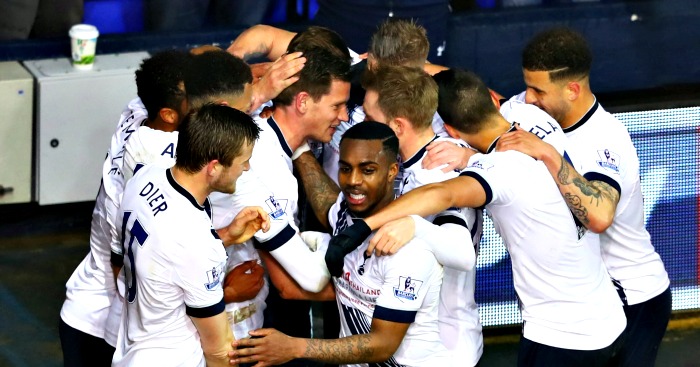 By almost any objective measure, Tottenham should be fifth or perhaps even sixth. By wage bill (sixth), revenue (sixth: Deloitte put them almost £100m per season behind even Liverpool), gross money spent on transfers over the last five years (fifth, ahead of Arsenal) and history (fifth in an overall Premier League table, sixth on average points per game). Fifth or sixth.

Even despite last season’s title challenge and third-place finish, when the BBC asked 33 pundits, journalists and commentators for their pre-season predictions, only one (bless you, Chris Waddle) thought they would win the title and barely a third thought they would finish in the top four. Their overall predicted place: Fifth, squeaking just ahead of Liverpool.

They now sit one point away from their first second-place finish in 54 years and have already claimed the most points and most goals in any of their 25 Premier League seasons. Unless they ship 13 goals in their final three games, they will have dovetailed their best attacking season with their best defending season – a neat trick. This has been a truly phenomenal campaign for a Tottenham side which has laughed in the face of logic and chortled in the general vicinity of everything we think we know about success being fuelled by money.

Leicester certainly pulled off the greatest magic trick in the history of football, but Tottenham have conjured up sustainable sorcery, with Mauricio Pochettino turning a sixth into a fifth into a third into a second. And all this while bigger, richer clubs have paid ever-increasing money to more players, with four clubs ‘upgrading’ their managers within the Argentine’s three-year spell. A Premier League table for that period looks like this:

A reminder now that Pochettino took over a side that had just finished sixth – behind Everton – and were ten points behind Arsenal and 17 points behind champions Manchester City. A title challenge looked so far away that it was barely a spot on the horizon. And a reminder – should you still need it – that Tottenham’s finances meant that sixth place was just about par. There is a reason why Tim Sherwood got another Premier League job; he had not failed, just not quite succeeded.

And yet, there are those that would have you believe that Tottenham have stumbled or even failed this season because they have logged another year without silverware. Some even rolled out the word ‘Spursy’ after Friday night’s defeat to West Ham put an end to any lingering hopes of a title challenge that was only ever a slim possibility because of an extraordinary run of form. In the mailbox this week, Manchester United fans claimed their season – likely to end in Tottenham’s rightful position of sixth – a greater success because they may end with two trophies.

That’s a debate that is likely to last all summer but Tottenham fans would be well-advised to stay clear. Whatever happens at United or Arsenal (who could yet finish fourth and claim a trophy), this has been an extraordinary season for Tottenham. Better than United’s? Who cares. Better than Arsenal’s? So what. Is it better than they could have reasonably expected? God yes. Immeasurably so.

Should that judgement come with a caveat about a lack of European progress? Not when no side since Manchester United in 2010/11 has successfully combined both domestic and European progress, no. Not when the only clubs to reach Champions League quarter-finals since then have finished fourth, seventh, third, sixth and, with Leicester, a likely ninth. Not when the last two Premier League title winners have not been burdened by European football.

That sorry state of affairs combined with Tottenham’s financial situation means no caveat is necessary; they simply do not have the strength in depth to compete on all fronts, nor the means to solve that problem. That they already have four players on the 4,000-minute list suggests that further European progress would have been detrimental to their Premier League season.