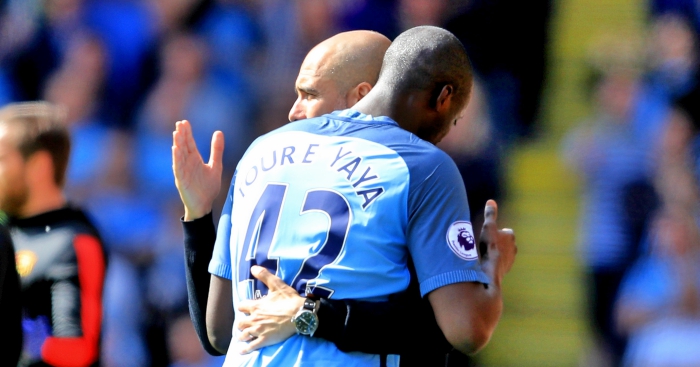 Seluk and Guardiola have never seen eye to eye since Toure’s days under the Spaniard at Barcelona, and the feud was reignited on Tuesday.

Toure accused Guardiola of having “problems with Africans”, and Seluk has added insult to insult.

Within an 828-word rant, Seluk placed an “African curse” on Guardiola, said he will never win the Champions League again, questioned the amount of money he has spent and said that Toure would be happy to play for another club in the Premier League’s ‘Big Six’ for a initial wage of £1.

“Yaya knows Guardiola like no other,” he told Sport24. “He worked with him both in Barcelona and in Manchester City. With all the desire, nothing good about the human qualities of Guardiola can be said.

“You can start with the fact that he came to Manchester City in a nasty manner. The transfer was announced at a time when Pellegrini, his co-worker in the coaching department, was still at the helm of the team.

“Guardiola was afraid that Pellegrini would win the championship and other tournaments that season, as he did before he came to Bayern Munich, when Jupp Heynckes won all that is possible. Guardiola could not repeat the achievements of Heynckes, being the next three years at the helm of the best German club, which without Guardiola again leads and wins. If you assign my grandmother to Bayern, the team will still become the champion!

“Even at Barcelona there was friction between Yaya and Guardiola. Just like Eto’o, Ibrahimovic and many other players.

“If Sheikh Mansour and the president Khaldoon Al Mubarak think that Guardiola loves them, they are deeply mistaken. He came to the club to make millions off Arab billionaires.

“What did Guardiola achieve? In two years he won the same as Mancini or Pellegrini. And Pellegrini reached the semi-finals of the Champions League, and Guardiola – not yet. Manchester City has now extended the contract with him for three years. I bet that Guardiola will not win the Champions League during this time, no matter how much money he has spent, but he likes to do it. When only £200million is spent on the line of defence, when money is not counted…

“Perhaps, many will say that this is the style of Guardiola, that he plays enchanting football. Only when you buy all the best players in the world, it’s much easier than, for example, in the case of Ranieri, who won the Premier League with Leicester.

“In the press, a lot is written about Guardiola, although he is not worthy of being a person. In this case, we hear little about Zidane, and he won the Champions League three times in a row. This speaks about the essence of a person’s personality. And when they say that Guardiola is the best coach, then I have to say: Guardiola hasn’t won three consecutive UEFA Champions Leagues.

“God sees everything. As a man who acted with Yaya, the legend of the club, which under different pretexts did not give the opportunity to go on the field. He turned all Africa against himself, many African fans turned away from Manchester City. And I’m sure that many African shamans in the future will not allow Guardiola to win the Champions League. This will be for Guardiola an African curse. Life will show whether I am right or not.”

“Now Yaya has many offers from different countries, where they are ready to pay a lot of money, but we decided to dedicate the next season to Guardiola. And to prove and show the fans of Manchester City that Yaya is not finished with football. He is full of energy and wants to play this season in England.

“At a time when huge sums are being spent in England for the purchase of football players, I officially declare that Yaya is ready to move as a free agent to any English club in the top six with a salary of £1 a week – but for certain successes to make a bonus system.

“I believe that a player like Yaya would not harm Arsenal, Chelsea, Manchester United, Tottenham and Liverpool. Yaya – the winner. And never before has a top footballer with leadership qualities harmed any club, especially when it is not necessary to pay for it.

“I think it’s the first time in history. We are not so interested in money, as perhaps it seemed to many. If they were interested in us, we would go to another country, where they offer very large sums. But Yaya wants to show that he still has the strength to play at the top level for at least three or four years.

“Yaya always played as number 42. We chose this number as the age in which he will finish with football. After Guardiola in the next two or three years will not win the Champions League with Manchester City he will be kicked out, perhaps Yaya will return to the club, and in any capacity.

“The fact that Guardiola ended Yaya’s career in Manchester City is not even a mistake, but a crime. But the boomerang will return, Pep. You will still see what the African shamans are. Remember this always.

“At Benfica there is the curse of coach Bela Guttmann, after which the team loses all the European cup finals. And Guardiola will beat this record, despite the money injected into him.”