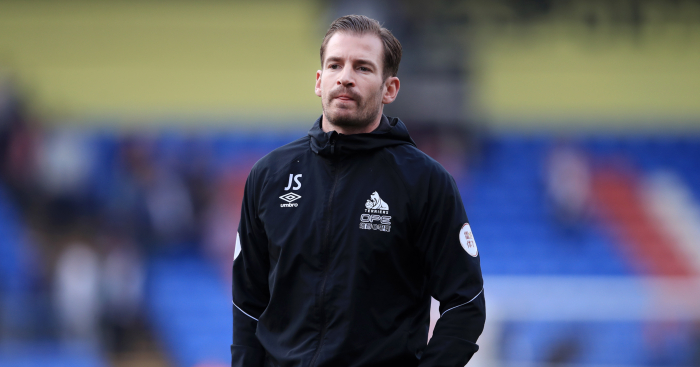 Huddersfield Town chairman Dean Hoyle has provided an impassioned response to rumours Jan Siewert’s job as manager is under threat.

The Terriers were officially relegated with a 2-0 defeat at Selhurst Park – the place where their Premier League journey began – against Crystal Palace on Saturday.

Rumours then emerged on Monday that Siewert could be sacked after three months at the helm, with The Times citing a poor relationship between the German and some of his senior players.

Following the club’s relegation, Hoyle his issued a statement to supporters, highlighting the need for optimism and seemingly confirming his confidence in Siewert.

“The club, myself included, is always learning and we must accept that we have got things wrong this season; the truth is you don’t end up where we are in the table unless that is the case,” he told htafc.com.

“There have been some unexpected circumstances that haven’t helped as the year unfolded, but we must take full responsibility for what has happened, and the buck ultimately stops with me.

“As our head coach put so eloquently in his post-match comments on Saturday, the club must learn from what has happened this year. Rest assured we will, because there is a genuine desire to improve from everyone at Huddersfield Town. I see that every day.

“We have six Premier League games still to play and we owe it to you to put everything into them. I think they can be very useful as we begin to plan for next season and we must make sure we learn from each match; they cannot go to waste.

“Despite the season we’ve had, I must stress that this club is in its best position in modern memory. We are strong in every area and we have made sure that our first foray in the Premier League will have lasting benefits for Huddersfield Town, such as the legacy that our improved training ground will give for years to come. Sustainability is so important for every club.

“Our stability was one of the main reasons we reached the Premier League and that must be the focus again as we return to the Sky Bet Championship next season. Naturally players will depart and arrive during what promises to be a very busy summer, but we will not gamble with the Club’s future by spending recklessly.

“Jan Siewert came into the club at a difficult time and he would be the first to tell you that he’s not happy with the results we’ve had so far. However, I believe Jan has made a big impact on the first team already. He’s made some big decisions and has shown a real understanding of putting the club first, before everyone else. I’m very pleased with the work he has put in and I’m genuinely excited to see what his team will look like after a full pre-season. The board of directors is fully behind Jan as the man to take us forward.

“Jan has a very clear playing identity, which is vitally important to us. It allows us to recruit players who will fit his style, which is where we had our success ahead of the 2016/17 season. As well as recruitment, we want to be the fittest team, the hardest-working team and show a real togetherness. If we put all those elements together, it’ll be an exciting prospect for every Town fan.”