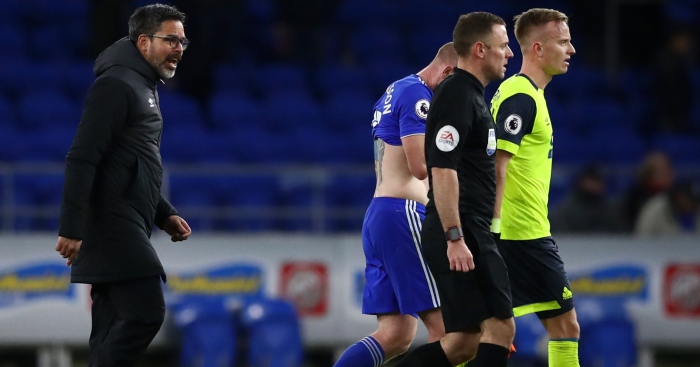 David Wagner fears Huddersfield will pay the ultimate price for a big mistake by the officials in the goalless stalemate at Cardiff.

What had been a dreary Premier League affair low on quality produced a major 76th-minute talking point when referee Lee Mason pointed to the penalty spot after Florent Hadergjonaj had tumbled in the box.

Several Cardiff players rushed towards Mason’s assistant in the corner and the referee soon made his way there for a conversation.

Mason then dramatically reversed his decision and penalised Hadergjonaj for fouling Joe Bennett rather than the other way round, much to the bemusement of Terriers boss Wagner on the touchline.

“To be honest I’m not the right person to ask the question,” Wagner told the BBC when asked about the ruling. “There are four people in black and you have to ask them what was going on.

“I spoke to the linesman during the match and he said ‘the first incident was not a foul and the second I don’t know’ but I don’t know what he means. It was clearly a penalty, the video footage speaks for itself and we have not got it. It makes no sense to waste my energy for something like this, but it was a big mistake.

“I really can’t find the words how this can happen. The fourth official had no idea either, he was as surprised as everyone else was. Decisions like this make tables and seasons. We have had so many decisions against us and I don’t know why.

“The boys left everything on the grass, and only one team deserved something out of the game. One point is not enough, we needed to win.”