Home All The News Townsend: City are probably the team of our generation 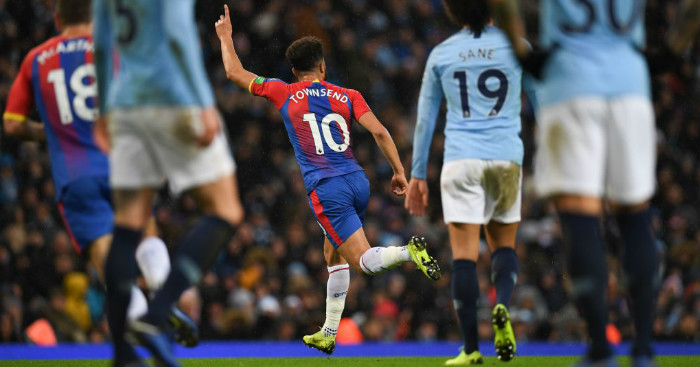 Andros Townsend felt he had almost completed the impossible after helping Crystal Palace take Manchester City down with a stunning goal.

The Palace winger struck with a ferocious volley – measured at 29 yards by TV broadcasters – as Palace came from behind to claim a shock 3-2 win over the champions at the Etihad Stadium on Saturday.

It was a completely unexpected result and Townsend was almost at a loss to explain it.

“I have said before Man City are probably the team of our generation,” said the 27-year-old.

“I have never played against a team as good as them, especially at home, and it is impossible to get the ball off them.

“We knew if we were going to get anything it was going to have to be a perfect disciplined performance and it saw us to a well-needed three points.”

City took the lead through Ilkay Gundogan but Palace stunned the hosts with a rapid response, Jeffrey Schlupp finding and instant equaliser and then Townsend firing them ahead.

The ball dropped towards Townsend as City failed to clear a set-piece effectively and he caught it sweetly with his left foot.

Townsend said: “Having watched it back it’s probably the cleanest strike of my career and probably the best. It sat up nicely for me and as soon as it left my foot I knew it had a chance.”

The visitors added a third with a Luka Milivojevic penalty and held on despite Kevin De Bruyne’s fortuitous late reply.

Palace had lost five of their previous six away games but victory came after last week’s home victory over Leicester and lifted them to 14th in the Premier League.

Townsend said: “First and foremost we can’t get carried away. We have had results like this in the past and then in the next game we have lost.

“We have to start thinking about Cardiff and following this performance up with another three points or else this result means nothing.”

Hodgson, a former Liverpool manager, said: “Pep Guardiola is a very intelligent guy. They haven’t caught up those four points but he knows there are 20 matches left to play and one of those is going to be against Liverpool.

“I don’t think he will be concerned about that and he’ll know that no matter how Liverpool play, they will come against a game like this.

“They will go somewhere and someone will beat them against the odds. Someone will upset them. There is a long way to go yet.”