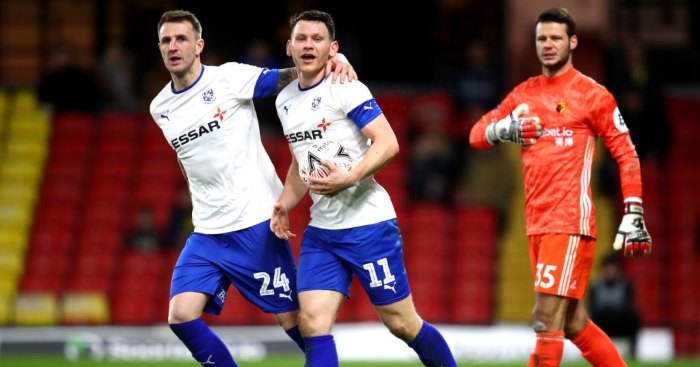 Paul Mullin’s late penalty clinched Tranmere a replay against Watford after the League One side fought back from 3-0 down.

Emmanuel Monthe pulled it back to 3-2 with 12 minutes left and Mullin equalised from the spot after Mason Barrett’s foul on Corey Blackett-Taylor.

Pereyra was shown a straight red card in the 89th minute for his challenge on Kieron Morris.

Premier League sides Brighton and Aston Villa both crashed out against Championship opposition.

Adam Reach’s second-half free-kick proved decisive for Sheffield Wednesday against Brighton at the Amex Stadium and Villa lost 2-1 at Fulham.

Anthony Knockaert curled Fulham into a 54th-minute lead and after Anwar El Ghazi’s equaliser, Harry Arter fired the Londoners back in front.

Hartlepool, one of only two non-league sides left in the competition, also bowed out as Oxford hit back to win 4-1 at the Kassam Stadium.

Emiliano Marcondes’ free-kick just before half-time secured Brentford a 1-0 home win against Stoke, while Cardiff fought back from 2-0 down to draw 2-2 at home against League Two side Carlisle.

The Cumbrians took an early lead when Jack Bridge headed home a rebound after his initial penalty had been saved and Harry McKirdy headed the visitors’ second just before half-time.

But Cardiff were back on terms within 10 minutes of the restart through Callum Paterson and Gavin Whyte’s header.

Adam Idah struck a hat-trick as Norwich won 4-2 at Preston.

Idah’s first-half double sandwiched Onel Hernandez’s effort to put Norwich 3-0 up before Billy Bodin pulled one back for Preston.

Reading twice hit back to draw 2-2 at home against Blackpool.

The Seasiders led at the break through Nathan Delfouneso’s header and after Sam Baldock had equalised for Reading, the visitors restored their advantage through Armand Gnanduillet only for Danny Loader to level it up again.

Second-half goals from teenagers Will Smallbone and Jake Vokins secured Southampton a 2-0 home win against Huddersfield.

Veteran striker Aaron Wilbraham’s late equaliser in a lunchtime kick-off at Spotland earned Rochdale a replay in a 1-1 draw against Newcastle.

Wilbraham, 40, a half-time substitute, converted a cross from teenager Luke Matheson after Miguel Almiron had given Steve Bruce’s side an interval lead.

Rodriguez fired an early opener and further goals from Erik Pieters and Jeff Hendrick put Burnley 3-0 up before Ivan Toney pulled one back for Posh in the 39th minute.

Striker Rodriguez slotted home his second and after Toney’s effort had been cleared off the goal-line, Posh reduced the arrears again through Ricky Jade-Jones.

Sean Goss’s second-half equaliser secured Shrewsbury a replay in a 1-1 draw at Bristol City, who had been given an interval lead by Famara Diedhiou.

The Shrews went close to a winner when Josh Laurent’s 68th-minute shot hit a post.

Tom Eaves headed a stoppage-time winner to complete his hat-trick as Hull won 3-2 at 10-man Rotherham.

Rotherham defender Adam Thompson was shown a straight red card for his first-half challenge on Keane Lewis-Potter after Eaves’ opener had been cancelled out by Michael Smith.

Kyle Vassell gave the Millers a half-time lead, but Eaves struck twice more for the Tigers.

Blackburn levelled through Adam Armstrong’s penalty after Dan Crowley had given Birmingham an early lead.

Armstrong’s spot kick was awarded after Ivan Sunjic was sent off for bringing down Blackburn’s Sam Gallagher, less than two minutes after stepping off the bench, but Bela clinched it for Birmingham in the 90th minute.

Matt Smith, Connor Mahoney (penalty) and Tom Bradshaw were all on target for Millwall in a 3-0 home win against Newport.

Later in the day Bournemouth thrashed Luton Town 4-0 to progress, while Portsmouth beat Fleetwood Town in an all-League One tie.