Liverpool are spending very conservatively this summer. How does their approach compare? 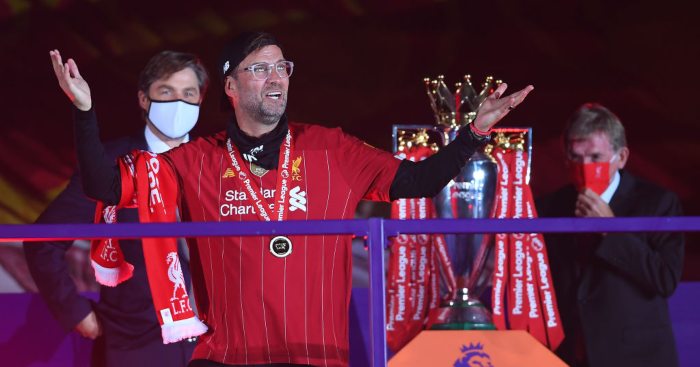 Signing Thiago has got Liverpool fans into a frenzy, but how does their otherwise modest spending – though Diogo Jota is on his way – compare to the the previous 10 Premier League champions?

Pep Guardiola set about his quest for a third consecutive Premier League title by breaking City’s transfer record as part of £128.5million spend. City signed Rodri with a view to eventually replacing Fernandinho, while Pep also found time to indulge in his favourite pastime: spluffing huge sums on full-backs.

Rodri had an unassuming start to life in the Premier League while Cancelo turned out to be a bit of a dud and City were trying to swap him by January. At least Angelino recovered somewhat from a terrible start but City failed to address the gaping hole at centre-back and they were left choking on Liverpool’s dust, despite Jurgen Klopp choosing not to strengthen his first XI at all.
Finished: 2nd

Aside from signing a couple of youngsters to add to their loan army, City felt it necessary only to make one senior recruit after cruising to Guardiola’s first Premier League title. But getting Mahrez through the door was no easy job and it took a club-record fee, beating the previous benchmark set when Aymeric Laporte arrived earlier in 2018. It was enough to hold off Liverpool – just.
Finished: Champions

Chelsea tried to strengthen from a position of authority but it turned out to be a catastrophic window for the Blues and Antonio Conte, even if they raked in £109million from sales. They broke their transfer record – one of 12 clubs to do so in 2017 – to sign Morata, but only after Manchester United had beaten them to Romelu Lukaku. Morata, Bakayoko and Drinkwater were disastrous signings, with only Rudiger still having a role to play in Frank Lampard’s first team.
Finished: 5th

When Leicester began in 2015/16 to make early plans for their recruitment, they couldn’t feasibly have expected to go into the summer as champions. Even so, they had a shocker. The Foxes broke their transfer record three times on Mendy, Musa and Slimani but frivolity did not work for a club who built their stunning title success on unearthing cheap talent like Mahrez and N’Golo Kante. Only Mendy can be looked upon as anything other than a waste of good money, and Claudio Ranieri paid with his job while the Foxes fought a relegation battle amid a fine run to the Champions League quarter-finals.
Finished: 12th

Looking back, perhaps we should not have been quite so surprised at Chelsea’s atrocious title defence in 2015/16. The champions were 16th in December when Jose Mourinho was axed after a summer in which the Blues tried to be too clever. Aside from Pedro, who proved to be an astute signing, Chelsea targeted young talent like Baba Rahmann and Papy Djilobodji. They gambled on Falcao flopping at Man Utd being a fluke. Alas, it was not.
Finished: 10th

Manuel Pellegrini reined in City’s spending because of FFP (when that was a thing) but the champions still p*ssed away £32million on Mangala. “He has all the mental, physical, technical and tactical attributes to become one of Europe’s very best defenders.” Franco Baresi, he was not.
Finished: 2nd

United’s first post-Ferguson window saw David Moyes chase the likes of Gareth Bale, Toni Kroos and Cesc Fabregas across Europe, only to pay £4million more for Fellaini on deadline day than he might have done just a few weeks earlier. This was also the summer that Moyes chose to pass on Thiago Alcantara, which we’re sure to hear over and over again in the coming weeks…
Finished: 7th

City resisted the temptation to celebrate their first Premier League title by continuing their splurge of previous summers, with 2012 representing their lowest transfer spend in five years. And it was hardly money well-spent. Maicon was past-it, while Rodwell and Sinclair never reached ‘it’. Nastasic cost City £12million plus Stefan Savic, with Fiorentina certainly getting the better end of that particular deal.
Finished: 2nd

United can’t say they didn’t get good longevity from their signings nine years ago when the Phil Jones era began at Old Trafford. Their priority was to source a replacement for the retiring Paul Scholes – he replaced himself six months later – and Edwin van der Sar, which was found in the shape of a waif-like young Spaniard who would go on to become the world’s best goalkeeper. But David De Gea’s mistakes in his maiden season proved costly as United lost their title in the dying seconds of the campaign by the narrowest of margins to their nearest neighbours.
Finished: 2nd.

Certainly in comparison to Manchester City, Roman Abramovich kept his powder dry following Chelsea’s Double triumph under Carlo Ancelotti in 2009/10. Benayoun was an inexpensive squad addition while Ramires was bought with one eye on the future and another on getting one over on Manchester United, who were also reluctant to spend. The Blues went big the following January, however, chucking over £70m at Liverpool and Benfica for Fernando Torres and David Luiz respectively.
Finished: 2nd