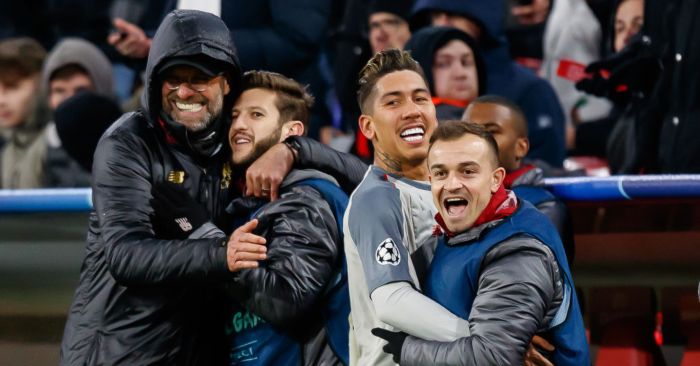 LOVE SHAQ
As Newcastle fans frantically rub themselves over rumours of interest in Philippe Coutinho, Harry Kane and Mauricio Pochettino, all with the backing of Arsene Wenger, the Daily Mail offers a slightly more sensible slice of Liverpool-related speculation on Wednesday.

They say that Xherdan Shaqiri has been ‘identified’ as an ideal post-takeover signing. The Magpies would consider ‘capitalising’ on his situation at Liverpool, where he has started three games all season.

And while Jurgen Klopp blocked a January move to either Roma or Sevilla, Liverpool ‘will not stand in his way’ now. Newcastle ‘have made contact’ with Shaqiri’s group and while no fee is mentioned here, Galatasaray were quoted £14.3m when they tried to agree a loan deal with a view to a permanent move earlier this month.

Anyway, his departure ‘is expected to be part of a cull’ this summer…

READ: The 20 most expensively-assembled squads in Europe

LALLA LAND
Only one other name is mentioned in the report, unfortunately: that of Adam Lallana. Leicester are ‘hot favourites’ to sign a player also wanted by Burnley, but who seems destined to reunite with the manager that brought him to Anfield in the first place.

Liverpool have held ‘no discussions’ with the midfielder over extending a contract that expires on June 30, as they are waiting to discover what course the Premier League season will take instead. But whether it is in July or a little later, it seems certain that Brendan Rodgers will get his man.

Arsenal, Crystal Palace, Everton and West Ham have also been linked. As it stands, Leicester don’t make that much of a choice.

The Daily Mirror do actually throw another team into that particular hat in the form of Tottenham. But they reiterate that the Foxes ‘are at the head of the queue’ for Lallana.

There even ‘remains the possibility’ he could stay at Liverpool for next season, yet he simultaneously ‘seems certain to move on’. Impressive.

ADAMA SHAME
But Liverpool’s clear-out will supposedly continue with the sale of Sadio Mane.

TodoFichajes claim Liverpool realise ‘there is a good chance’ he will leave this summer and thus a replacement has already been sourced. Klopp ‘has personally telephoned’ Adama Traore, their new £60m top target.

And while Wolves make better predators than they do prey, it is added that negotiations between the two clubs ‘are well advanced’ and they could ‘reach an agreement’ soon.

Nothing is added on Mane but he has only really been linked with one club. Real Madrid seem fairly obsessed with a player who has been valued in some quarters at £150m.