Alexandre Lacazette will be allowed to leave Arsenal this summer, while Liverpool are in for a centre-back... 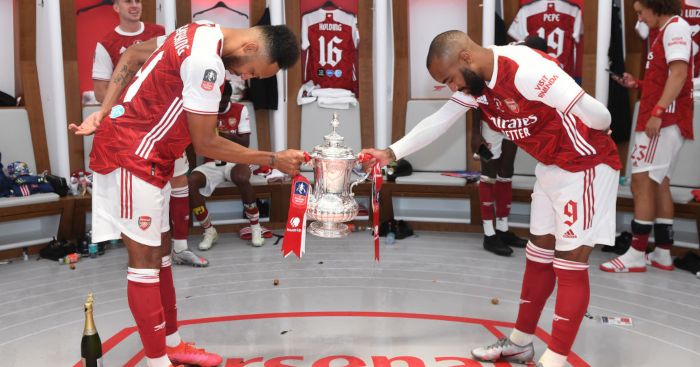 Alexandre Lacazette will be allowed to leave Arsenal this summer, while Liverpool are in for a centre-back…

AUBA DEAL ALLOWS LACA EXIT
Arsenal will allow Alexandre Lacazette to complete a move to Atletico Madrid this summer once Pierre-Emerick Aubameyang signs a new contract, according to reports. The Frenchman had been struggling to find form following the Premier League restart but over the last five or six matches he’s shown his worth to Arsenal, while he has scored three goals in his last four matches.

His return this season isn’t great – with ten Premier League goals to his name – and there have been constant rumours that he or Aubameyang could be sold this summer. And now the Daily Star says Lacazette ‘will be on his way to Atletico Madrid’ once his strike partner agrees to a new Arsenal deal with the Gunners ‘close to persuading’ Aubameyang to sign.

That would put Lacazette ‘on course for a £30m switch to Spain’ with the Frenchman ‘unhappy to be no more than a bit-part figure’ under Mikel Arteta. The report adds that with Gabriel Martinelli still to come back from injury, Lacazette’s ‘chances are likely to remain limited next term’.

WHITE TO BECOME RED?
Liverpool are looking to make a £20m move for Brighton defender Ben White but face competition from Chelsea for his signature, according to reports. White played in every Championship game while on loan at Leeds United last season, helping them to earn promotion to the Premier League.

He also helped the side to record an impressive 22 clean sheets. White is now back at Brighton, although his future remains uncertain. Leeds have reportedly made a bid of their own to bring the centre-half back to Elland Road but Liverpool and Chelsea could now provide fierce competition.

The Daily Star claims that Chelsea are ‘planning to hijack’ Liverpool’s £20m move for White with the Blues ‘ready to gazump the Premier League champions’. Frank Lampard is prepared to ‘ditch Antonio Rudiger in the process’ with the Germany international set to be ‘one of the big-name casualties at the back this summer’.

The report adds: ‘Rudiger’s departure will further clear the way for the Blues to battle against champions Liverpool for the signature of White.’

AND THE REST…
Edinson Cavani is in talks with Benfica with a view to joining the Portuguese club this summer…PSG are still searching for Thiago Silva’s replacement and are considering a move for €40m-rated Nikola Milenkovic…Republic of Ireland international Jeff Hendrick is also a target for Newcastle following his release from Burnley…Chelsea have been boosted in their bid to sign West Ham’s Declan Rice, with the Hammers considering selling the England international in an effort to rebuild their squad…Manchester United are keen to sell Phil Jones this summer and have decided against operating on the defender to boost their hopes of offloading him…Manchester United are expected to offer Dean Henderson an improved deal as they try to convince him his long-term future lies at Old Trafford…Chelsea, Tottenham Hotspur and Barcelona have all been looking at Watford youngster Pervis Estupinan…