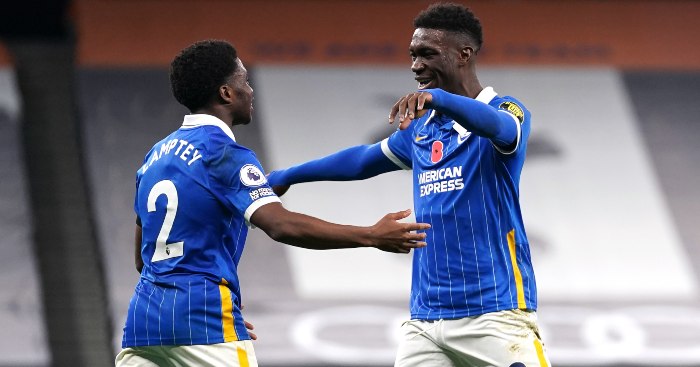 Yves Bissouma’s name keeps coming up in connection with the Gunners. The Brighton midfielder is also reported to have caught Liverpool’s eye, but Arsenal seem to be positioning themselves towards the front of the queue for the 24-year-old.

Arsenal representatives are said to have been in touch with Bissouma’s agent and, according to football.london which quotes a ‘close friend’ of the Mali international, the Brighton star would choose a move to the Emirates over any other destination.

A deal this month is said to be unlikely, with the Gunners focused on adding more creativity to their engine room. But Arsenal will, apparently, make their move in the summer.

BRIGHTON CONFIDENT OF CAICEDO DEAL
By then, Brighton may already have replaced Bissouma…

The Seagulls are said to be confident of having won the race to sign Moises Caicedo from Independiente del Valle. The 19-year-old was previously thought to be on Manchester United’s radar, while Everton and Newcastle have also been linked with the midfielder.

But the Red Devils are said to have walked away from any deal when, in the words of the Manchester Evening News, it became ‘too messy’. The Toon registered some late interest, but Talksport says Brighton have a fee agreed for Caicedo.

It just wouldn’t be a transfer window without them being linked with Steven N’Zonzi. And we have Foot Mercato to thank for bringing us that warm feeling of familiarity in these strange, unprecedented times.

NZonzi is currently on loan at Rennes from Roma and the talk is that his deal in the Italian capital could be cancelled in the coming days. Rennes are keen on the 32-year-old making his stay a permanent one, with a two-year deal mooted for the former Stoke star.

But Arsenal and Everton are still said to have eyes on N’Zonzi, who is understood to be taking his sweet time over making a decision.

ARTETA WON’T BREAK THE BANK FOR BUENDIA
A move for Nzonzi seems unlikely on Arsenal’s part and the same can now be said for Norwich’s Emi Buendia.

The Gunners have been chirping at the Canaries over a deal this month but it would appear things have gone quiet.

The Express says Arsenal have now backed off Buendia after Norwich informed them that any bidding should begin at £40million.

TOMORI TO MILAN?
Fikayo Tomori’s decision to swerve West Ham in the summer could turn out to be a masterstroke…

The Chelsea defender pulled out of a temporary move to the Hammers in the final moments of the last window, but the centre-back has only played four games since.

Newcastle and Leeds have been interested in tempting Tomori north, but Fabrizio Romano reckons AC Milan have also made their interest clear.

Tomori might want to hold off on packing his bags for Italy just yet. Apparently, the Serie A leaders are pursuing a move for Strasbourg’s Mohamed Simakan first, but Tomori remains their back-up option.