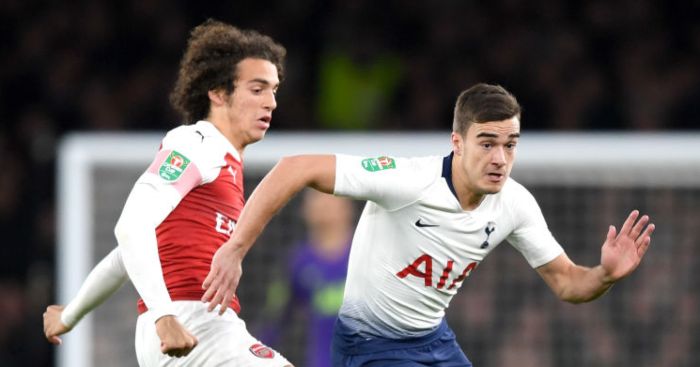 Arsenal want rid of Matteo Guendouzi, but swapping him for Philippe Coutinho makes no sense. And Spurs could sell Harry Winks.

A WINKS AND A SMILE
It does feel a little like adding two and two to come up with either four or 427, but the Daily Mirror have an exclusive for us on Sunday. They say Tottenham might sell Harry Winks.

That will come as a surprise to those of us who assumed he would stay in north London forever, registering a 94.1% pass accuracy and receiving 7/10 player ratings – ‘tidy on the ball throughout’ – until the end of time.

The claim is linked directly to Tottenham’s pursuit of Emile-Pierre Hojbjerg, with the Southampton midfielder lined up alongside Demarai Gray as Jose Mourinho’s first two summer signings.

Ralph Hasenhuttl has already insisted the club’s former captain will not be allowed to leave cheaply despite entering the final year of his Saints contract. And as Tottenham ‘will have to balance the books’ in this transfer window, the similarly valued Winks is said to be ‘the most likely player to leave’.

Tottenham expect to get around £25m to £30m for him. For a 24-year-old who ‘is by no means assured’ of starting under Mourinho, both parties might consider splitting.

LIPPE SERVICE
Arsenal continue to contemplate the future of their own precociously talented midfielder. Matteo Guendouzi is pretty much gone; it’s just a case of deciding where he’s headed.

Barcelona has long been touted as a possible destination and FootMercato echo that with a twist. They say the Catalan club ‘are discussing in a concrete way’ a swap involving Philippe Coutinho going to Arsenal.

Coutinho ‘imagines himself in England’ after a difficult two and a half years in Spain and on loan at Bayern Munich. Edu is suggested to be one of the main driving forces behind the deal, as well as the fact that Kia Joorabchian is the player’s agent.

It is said that ‘this operation’ seems ‘suitable’ for both clubs but that is fanciful. Barcelona would be happy to get an unhappy and unwanted Coutinho off their wage bill for good, but how do Arsenal benefit from exchanging one of their few genuinely saleable and expendable assets for a player who could shatter their own earnings structure? That is a ‘risk’ too far.

LANZ END
Perhaps there is something in the London water as West Ham also want one of their midfielders gone. The Sun say David Moyes is ‘open to offers’ for Manuel Lanzini and centre-half Fabien Balbuena.

There will be a concerted effort to freshen up the Hammers squad this summer, with younger players and ‘much-needed speed’ both priorities. And to ‘finance his plans’, Moyes is willing to sacrifice a pair who have featured for him only sporadically.

West Ham ‘would listen to reasonable offers’ for Lanzini and Balbuena quite fancies returning to South America, while Tomas Soucek has emerged as ‘a new Marouane Fellaini’. But who will step into Leon Osman’s shoes?